France's other rally: Triumphant, and foreboding

Paul Wells sends a dispatch from Beaucaire in France, where Marine Le Pen's counter-rally drew an ominous response from the crowd 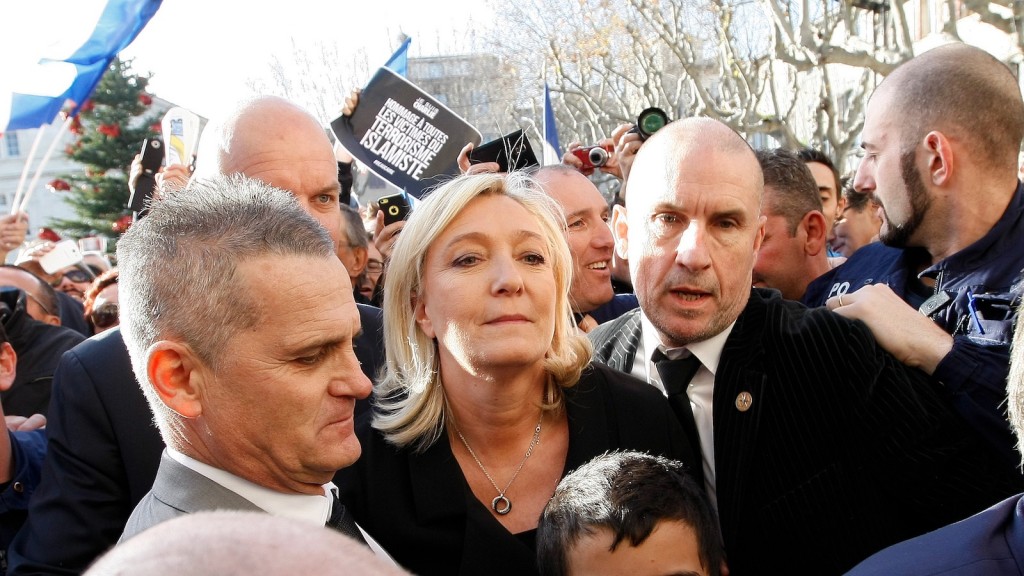 Of course the immense Paris rally wasn’t the only gathering in France on Sunday. The 1,000 people who gathered in the courtyard of the 17th-century town hall in Beaucaire, three hours by train and taxi from the Paris rally and less than one-thousandth its size, would not have been worth particular mention if it weren’t for the main speaker.

She was Marine Le Pen, leader of the National Front party. In the first day or so after Wednesday’s Charlie Hebdo massacre, leaders of France’s ruling Socialist party made a show of refusing to invite Le Pen. The National Front has long been defined by mainstream parties as outside the so-called Republican consensus: its strong anti-immigration policies and its history, under Le Pen’s father Jean-Marie Le Pen, of thinly-veiled anti-Semitism allowed other parties to marginalize it.

But things have changed lately. The younger Le Pen is not glamorous, but she seems less of a relic than her father. She has switched polarity on at least one key issue, actively courting Jewish voters instead of seeming, as her father often did, to be baffled by their existence. And on a bad day—and France had three very bad days in a row this week—her warnings about the nasty effects of immigration can seem prophetic to a growing portion of the French electorate. Even before the week’s slaughter, she was twice as popular as François Hollande, and that effect has been sustained over time; she has been able to translate it into electoral breakthroughs, including in Beaucaire, a dingy village near the Mediterranean coast whose young rookie mayor is in the National Front.

Excluding Le Pen from the main Paris rally was, it became immediately obvious, a huge mistake, because it allowed her to seem the victim of out-of-touch elites, a preferred stance of hers. Hollande paused from planning simultaneous police raids on two hostage standoffs on Friday to declare that any citizen could come to the rally, an attempt to defuse his party’s Le Pen gaffe. Too late. While her father, still a popular figure in the party, demonstrated his exquisite tin ear by stating that he would never “defend the spirit of Charlie Hebdo” because “it’s an anarcho-Trotskyist spirit that dissolves political morality,” Marine Le Pen moved instead to embrace the national mood — but on her terms.

In a video declaration on Saturday, she said National Front leaders would mourn the dead, not in Paris with Hollande and other people “who represent everything France hates,” but in the regions, “where the spirit of tolerance is strongest, where sectarianism is less violent.” Whatever damage it might do to logic, this was political judo of a high order.

And so Le Pen appeared with Beaucaire Mayor Julien Sanchez and a few other party worthies at 3 p.m., just as the Paris march got under way. Beforehand, police announced to the crowd that there would be no march, “out of security concerns.” Low-wattage speakers seemed to suggest speeches would be substituted instead. But at first Le Pen opted instead to wander through the crowd shaking hands. The great majority of the crowd, composed largely but not entirely of National Front sympathizers, found this frustrating. Derisive whistles and chants of “Marine au balcon!” [Get up to the balcony, Marine!] ensued.

So eventually a work crew dismantled the speakers and moved them upstairs to the balcony overlooking the courtyard. Here is my smartphone video of Le Pen’s short speech. In the spirit of the day it was devoid of partisan sniping, unlike the video in which she announced her plans.

What is perhaps most interesting is the crowd’s reaction after Le Pen finishes speaking. Spectators deliver a spontaneous rendition of La Marseillaise, France’s national anthem — and then chant “On est chez nous.” It translates simply enough, as “We are at home” or “This is our home.” But the strong implication is that other people in France aren’t at home. The party has used the slogan in a poster calling for the end of “anti-French racism” and the party’s secretary general has called the slogan “a cry from the heart, the French have had it up to here with being pariahs in their own country.”

When a speech by the woman who is sometimes France’s most popular political leader ends this way, it’s hard to believe spirits will be calming in France anytime soon.