Good luck getting past Jill Biden with your protest sign

Image of the Week: It's been said that Joe Biden won't go down without a fight. Neither will his spouse, evidently. 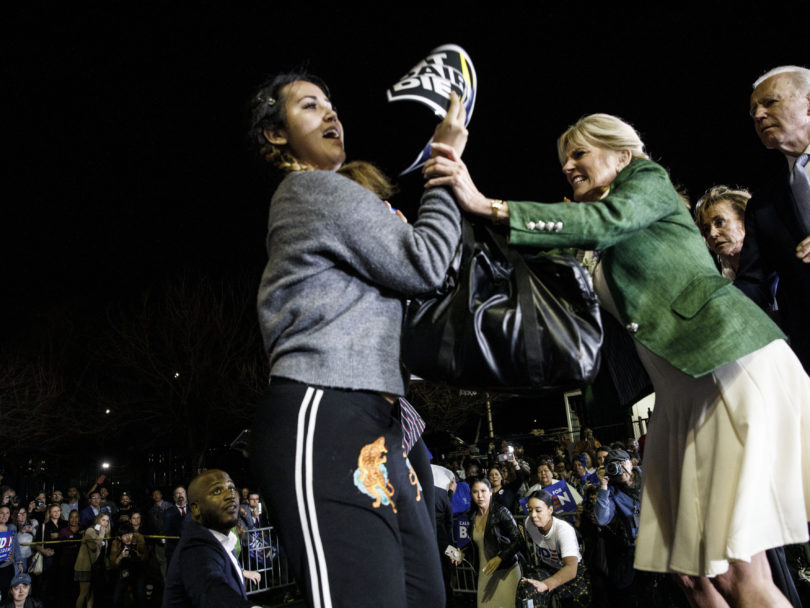 Jill Biden has never been a conventional political spouse. Opposed to the possibility of her husband’s presidential run in 2004, she walked into an early strategy meeting in a swimsuit with the word “NO” written on her stomach. She wanted to continue teaching no matter the political spotlight; she said as much during Joe Biden’s 1988 campaign, and after he became vice-president in 2008, she became the first Second Lady to hold down a paying job while her husband held office, teaching English as an adjunct professor at Northern Virginia Community College. (Some of her students didn’t even know her identity outside campus; when asked, she apparently told them she was “a relative” of the veep.) So, given her disregard for convention, it should not surprise politicos that, on the night of Super Tuesday this year, when an animal-rights protester barged onstage to interrupt her husband’s victory speech, Biden instinctively lunged at the interloper, smoothly grabbing the person’s arm like a bodyguard, with the help of campaign staffer, Symone Sanders. The moment will get a little play this week and likely be forgotten by the next primary. But Democrats would do well to recall the image come November, should Joe Biden square off against Donald Trump. They might envision it underscored by the caption: “Could you imagine Melania doing this?”