Harper and Obama can’t agree to disagree on defence

Paul Wells on why the leaders aren't so far apart, even if Canada won't pay its share of the bill 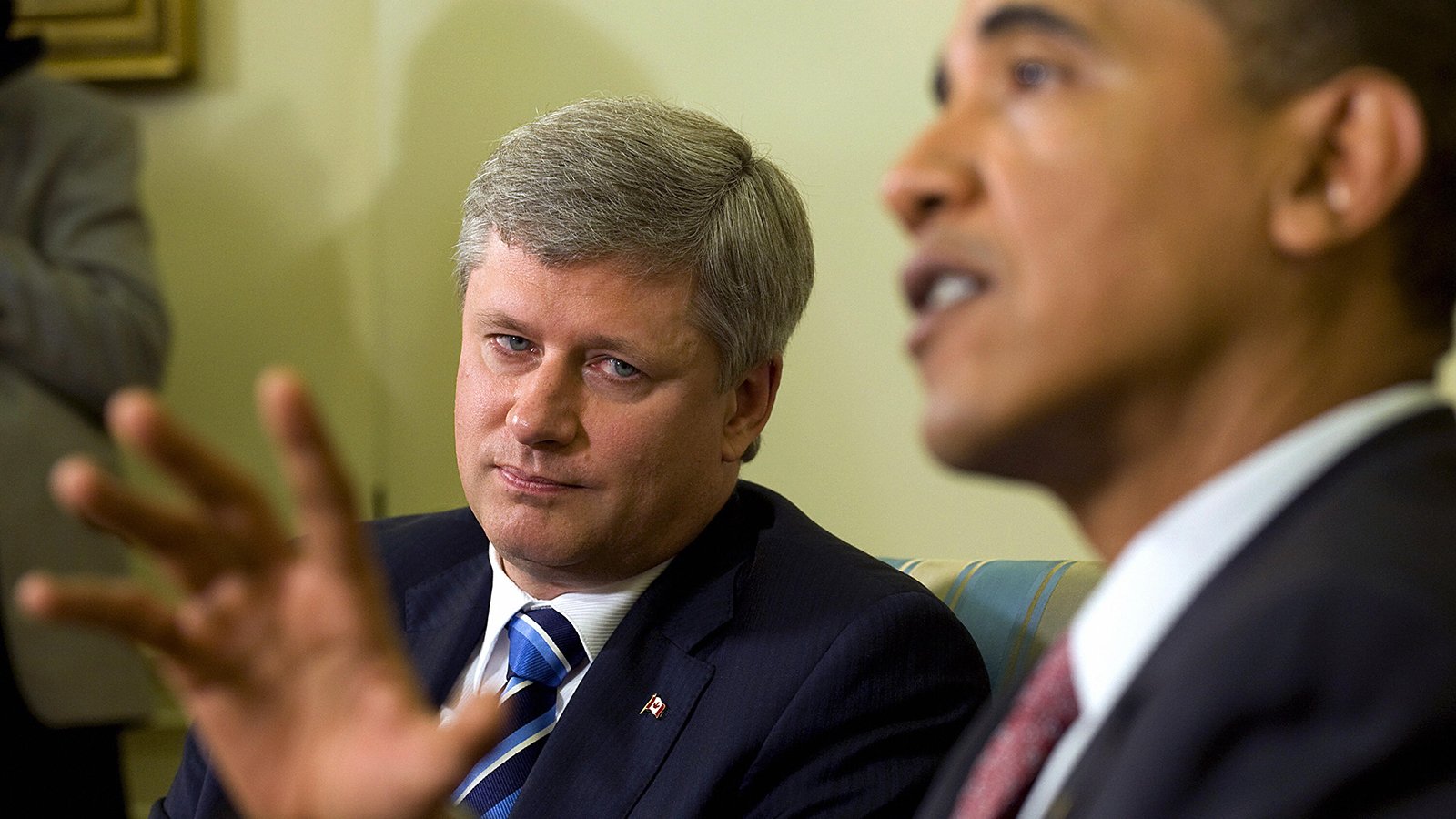 Stephen Harper and Barack Obama spoke by phone on Aug. 30. The White House “readout” of the call—the bland paragraph-length summary that gets sent out after every such conversation—said the two men discussed the NATO summit in Wales and the “situation in Iraq.” The readout from the Prime Minister’s Office said the same. The White House added: “The President stressed that agreement on increased defence investment in all areas is a top priority at the NATO Summit.” The PMO didn’t mention that part.

Of course it didn’t. Obama’s country spent about 3.8 per cent of GDP on national defence last year, down from 4.7 per cent in 2010, when spending was higher and the U.S. economy was a good deal weaker. Harper’s government spent one per cent of GDP on defence. That’s less than Germany does, and less than France, and less than Russia and Estonia do, as a fraction of total national wealth. Why, it’s even less than Canada spent when Paul Martin was the prime minister. And it’s way below NATO’s suggested level of two per cent of GDP for each member country’s defence budget.

There are all kinds of reasons for our modesty as a warrior state. Harper is trying to eliminate his budget deficit without cutting transfers to individuals (for pensions, mostly) or provinces (for health care and social services). That leaves only programs run out of Ottawa to cut, and defence cuts are easy: Armoured personnel carriers don’t complain to reporters when you stop buying them.

Canada needs to do more to meet its NATO pledge

But if Russian President Vladimir Putin’s adventures in eastern Ukraine are an existential fight between good and evil, then prudent budgeting really shouldn’t enter into it. The Prime Minister suggested as much in a speech last month to a group raising funds for a memorial to the victims of Communism. “Canadians have always supported freedom and democracy for all people,” he said, “and we will not hold back that support now from the people of Ukraine.”

It’s reasonable to suspect that Harper will emerge from the Wales summit with a commitment for renewed Canadian defence spending. But he sure won’t nearly quadruple the department’s budget. Suddenly, it becomes harder than it seemed to identify the hawk and the dove in any picture of Harper and Obama.

Sure, there are important nuances. Harper visited Ukraine early, in March and again in June. Obama, who sends Vice-President Joe Biden or Secretary of State John Kerry to do most such visits, hasn’t been yet. And, of course, Harper spends way more time talking the way columnists like to hear leaders talk. Obama says things like, “We don’t have a strategy yet,” when it comes to ISIS and, “There is not gonna be a military solution,” when it comes to Ukraine.

Add the mounting pile of trouble on Obama’s watch—Ukraine, ISIS, Hamas, savages cutting reporters’ heads off, savages shooting down passenger jets, Egypt and the United Arab Emirates launching their own air strikes in a Libya that has regressed from authoritarianism into anarchy—and you have an image of a president adrift. It’s a near-certainty that, when Harper runs for re-election in 2015, he will contrast Canada’s steady hand with Obama’s waffling.

But again, the differences are mostly rhetorical, if not misleading. Obama and Harper were both reluctant to arm the Syrian opposition, for fear that extremist groups there would be strengthened. With the rise of ISIS, their modesty looks becoming in retrospect. The two men worked together with others to provide military cover for the rebellion against Moammar Gadhafi. It worked great for 2011; who brags about the results there today?

There is not, in fact, going to be a military solution in Ukraine, except the one imposed from Moscow. The same was true in Hungary in 1956, Prague in 1968 and Poland in 1981, when stern and sturdy men held the office Obama occupies today. The only solution to Putin’s adventures is to draw a deep line around NATO with jets and artillery, pray Putin doesn’t test it, and try to wreck the Russian economy in the meantime. On this, Harper and Obama, who can barely stand to talk to each other, do not disagree, except that Obama wishes Harper would pay more of the bill.

Why is Obama such an unsatisfying leader? Partly it’s temperament. But there are two other reasons. First, he inherited three related predicaments: the wars in Iraq and Afghanistan and a collapsing domestic economy. Fixing the third meant ending the first two. He kept George W. Bush’s last defence secretary, Bob Gates, who left the post saying any man with his job who advised a big American war abroad “should have his head examined.”

The other reason is that Obama is seeking to accomplish by stealth what Bush couldn’t with big traditional invasion forces: sap and disorient America’s enemies in a thousand small ways, with drones, special forces, cyberwarfare and more. Little of Obama’s aggression abroad is announced with pomp. Some is never revealed at all. He wants results, not rhetoric, to triumph. It’s early to take the measure of his strategy, but it’s what you might try, too, if you’d inherited two wars and the U.S. economy. It’s not that far from the way Harper conducts domestic politics in Canada, avoiding big fights, pushing a hundred other levers, many hidden. Even in ruins, the Harper-Obama relationship continues to fascinate, because the two men have more in common than either will ever admit.