Help! I'm trapped on a stage with Boris Johnson

Image of the week: The British PM wants the hell out of Europe. Angela Merkel looks like she couldn't agree more. 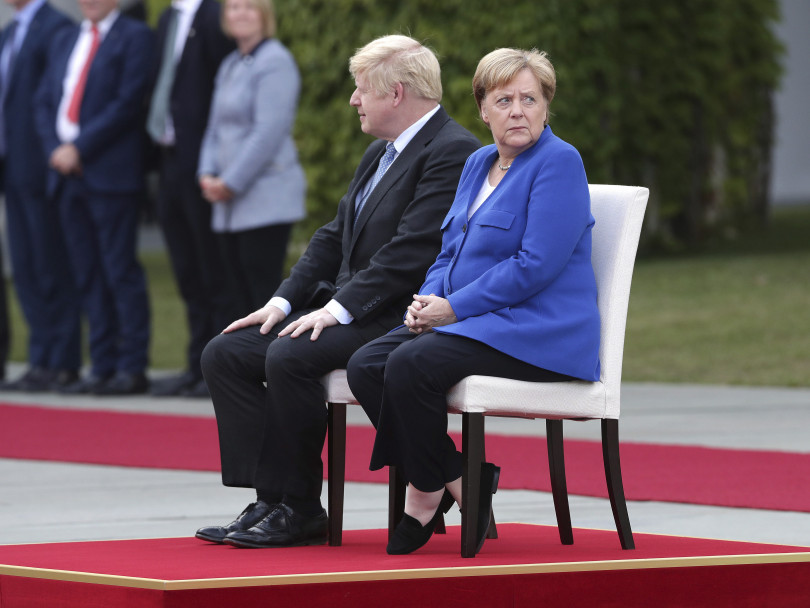 Officially, Merkel "welcomed" Johnson this week with military honours at a meeting in Berlin (Michael Sohn/AP/CP)

On Aug. 21, Germany’s leader of 14 years, Angela Merkel, held a joint press conference with the United Kingdom’s new prime minister, Boris Johnson, who’s held the post for about a month. Johnson charged into the role with gusto and a singular goal in mind: yank the U.K. out of the European Union as quickly and cleanly as possible. He said as much to an audience of 150 reporters and aides: “We in the U.K. want a deal. We seek a deal. And I believe that we can get one. We can do it. Wir schaffen das, I think is the phrase.” Right then, the crowd interrupted his speech with laughter—not at his attempt at German pronounciation, but at Merkel rolling her eyes. “Wir schaffen das,” which means “We can do it,” was a popular slogan espoused by Merkel during the migrant crisis of 2015. Since then, her country has seen well over a million asylum applications. For Johnson to co-opt it with a nationalist tone was hypocritical at best. But no one’s surprised. Often compared to Donald Trump for his trainwreck of a hair-do and his penchant for casually racist comments, Johnson is the latest right-wing leader to ride a populist wave to power, making big promises of national independence and a return the good ol’ days. Merkel’s mood is well summarized by the photograph above, in which her captive expression speaks volumes. Johnson may want Brexit, but she can’t wait to get the hell out of there.