'It may seem very far away from Winnipeg, but ... it is a struggle that all of us have a stake in making sure that our side wins' 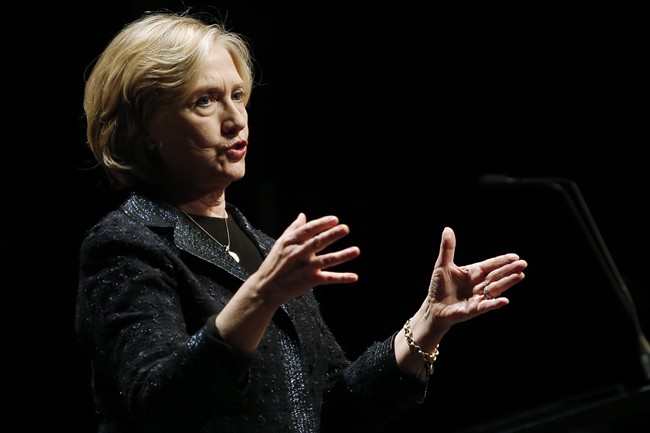 Clinton told about 2,000 people at a Winnipeg Chamber of Commerce luncheon that the international community has to target material that is drawing radicals to the cause.

Everyone has a stake in the “contest of ideas and values,” said the former senator and first lady, who pointed to the recent terrorist attacks in Paris and last year’s storming of Parliament Hill in Ottawa by lone gunman Michael Zehaf-Bibeau.

“This is a generational challenge and it must be waged on many fronts,” Clinton said. “It may seem very far away from Winnipeg, but … it is a struggle that all of us have a stake in making sure that our side wins.”

Extremism is hurting the vast majority of Muslims who are “peaceful and tolerant,” she said.

“We can’t close our eyes to the fact that, at this time in our world history, there is a distorted and dangerous strain of extremism within the Muslim world that continues to spread,” Clinton said. “They have the capacity to cause profound damage, most especially to their own communities. With these vicious few, we are confronting an ideology of hate.”

One of the best weapons in the fight against terrorism is democracy, Clinton suggested. She pointed to the outpouring of support from millions following the attacks in Paris.

“Extremism, authoritarianism, Putinism — none of them can compete with democracy at our best. The future is ours if we come together, live our values and understand that we have to export those values.”

Clinton’s speech in Winnipeg, to an audience who paid $300 a ticket, came the day after President Barack Obama’s state-of-the-union address.

There is wide speculation she will take another run at the Democratic presidential nomination. She ran unsuccessfully against Obama in 2008 and was appointed secretary of state during his first term as president.

On Wednesday, Clinton continued to be coy, calling a question about what she would do as president “hypothetical” to laughter from the audience.

She also steered clear of the controversial Keystone XL pipeline, which would carry oilsands bitumen from Alberta to Texas refineries.

“You won’t get me to talk about Keystone because I have steadily made clear I’m not going to express an opinion,” Clinton said. “This is in our process and that’s where it belongs.”

Instead, she kept her focus on how Canada and the United States could work together to fight terrorism and international instability.

There should be more international financial support for the Ukrainian government that is fighting against forces equipped by Russian President Vladimir Putin, she said.

Putin has his eye on a much larger swath of territory which he would like to annex or control through puppets, she said. That is bad news for Ukraine and for Europe.

“I think we should be putting more financial support into the Ukrainian government as they try to make their way slowly from what was an inept, dysfunctional, very corrupt system into a more globally accepted one,” Clinton said.

“I think we’re smart enough to figure out how we would hold them accountable for that and to make it very clear that the money comes with certain strings.”

Clinton was to visit Winnipeg’s new Canadian Museum for Human Rights before travelling to Saskatoon, where she was to give another speech Wednesday evening.