How did Britain come to this?

Shannon Gormley: Boris Johnson has broken from reality, and it began with the lie that Brexit would be easy 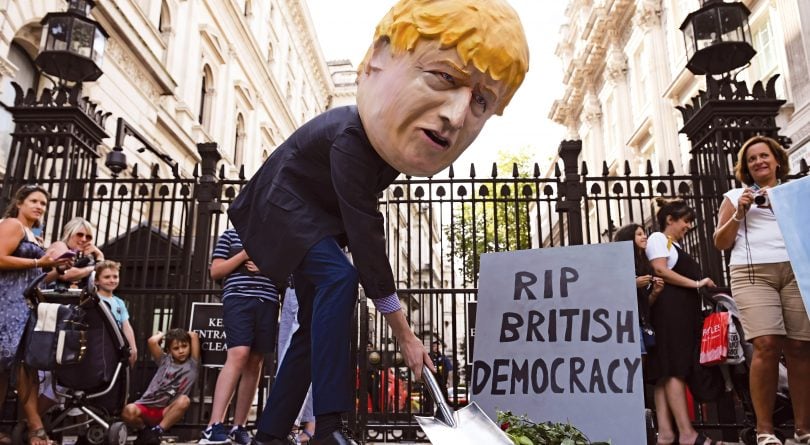 Despite the musings of the prime minister of the United Kingdom, at the United Nations no less, to the effect that sinister, tech-savvy mattresses will soon be able to read our dreams, it would seem wiser to reflect upon the past than dwell too thoroughly on what looks increasingly likely to be a dismal future.

For if the future does turn out to be so dismal, it will not be due to an insurgence of household refrigerators plotting to become our overlords, as Boris Johnson seems to imagine, but because he and his supporters have evidently broken with reality. In the past, at least, we may find a few answers.

Answers to the question of how, for instance, Britain came to this: a state in which everything once real has been denied, disavowed, turned upside down and made unreal.

Did it all begin in late September of this year, when Prime Minister Boris Johnson stated, in reply to pleas that he stop using wartime language to describe political opposition, that the best way to honour the memory of a murdered anti-Brexit MP was to take the very action she opposed? This is certainly slightly unreal—politicians typically insult only their living opponents, leaving the dead ones alone.

READ MORE: Will Elizabeth II be the last monarch of a United Kingdom?

Or did the break occur earlier, after the Supreme Court found the prime minister had broken the law in dismissing Parliament, leading him to reply that the court had misunderstood the law? The normal course of reality, when a politician breaks the law, is to resign, not declare that the law’s highest guardians don’t know what the law is.

Perhaps it was still earlier, when the prime minister suggested he would rather be found “dead in a ditch” than apply for an extension that would offer at least an opportunity to fight for a deal in Britain’s favour. Surely the moment when the U.K.’s own prime minister fought to mortally wound the country he leads rather than bear the lesser harm that Britain has forced the EU to inflict on it—surely this is the moment when the U.K. lost its grip on reality.

Maybe it was when the prime minister tried to harass the leader of the opposition into defeating him? Or when he expelled so many MPs from his caucus for opposing him that he turned his own majority into a minority? Or when he left his own brother with no choice but to quit his cabinet? When he left his own sister with no option but to publicly condemn him? When, in the midst of Britain’s greatest crisis since the Second World War, he left himself open to questions about how a government grant was awarded to his friend, a former model who seemed not to meet the proper criteria and whose new favourite set on which to strike poses is the stoop of No. 10?

RELATED: Boris Johnson and the peculiar British art of believing in nothing

These circumstances are, after all, the very definition of unreal, in that it seems that what is cannot possibly be so. To court a non-confidence vote rather than seek to avoid it; to seek a smaller number of seats rather than a larger one; to alienate not only one’s own colleagues, but one’s own family members. And yet these are mere instances of the new unreality Britain finds itself in, rather than the cause.

It began, rather, with a break from reality of another sort: a lie.

It is no coincidence that the British politician who has broken most conspicuously with reality is also responsible for stewarding his country’s break from the European Union, and that this break from the union was always premised on an irreparable break from the truth. His every act has been based on the lie of the Leave campaign, and that lie was this: leaving is easy.

All of it was to be easy. Disuniting the European Union, reuniting the United Kingdom, getting everything it wanted from everyone it wanted things from—it would all require no effort in exchange for no cost. Rallying the country behind leaving would occur swiftly; the process of leaving would be simple; and, the eventual trade deal—the one resulting from the very simple process of leaving that the country would rally behind swiftly—would be offered by Europe for the low, low price of absolutely nothing. Easy to get behind the cause, easy to get out of the club, easy to make off like a bandit. Easy, easy, easy money.

Never mind that many Britons prefer the benefits of belonging to an economic union to the disadvantages of being excluded from and possibly punished by one. Never mind that an economic union has no reason to help its members abandon it, and nearly as few reasons to help them profit from their abandonment. Britain, like so many other countries now, was ready to believe these lies, for the lie that leaving would be easy itself originates in another lie—the lie of populism: governing is easy, requiring no experience and even less expertise.

Though he himself has helped propagate that lie, at least Johnson cannot deny the realities of governing any longer.

This article appears in print in the November 2019 issue of Maclean’s magazine with the headline, “The upside down world.” Subscribe to the monthly print magazine here.