How linguists hear the U.S. election 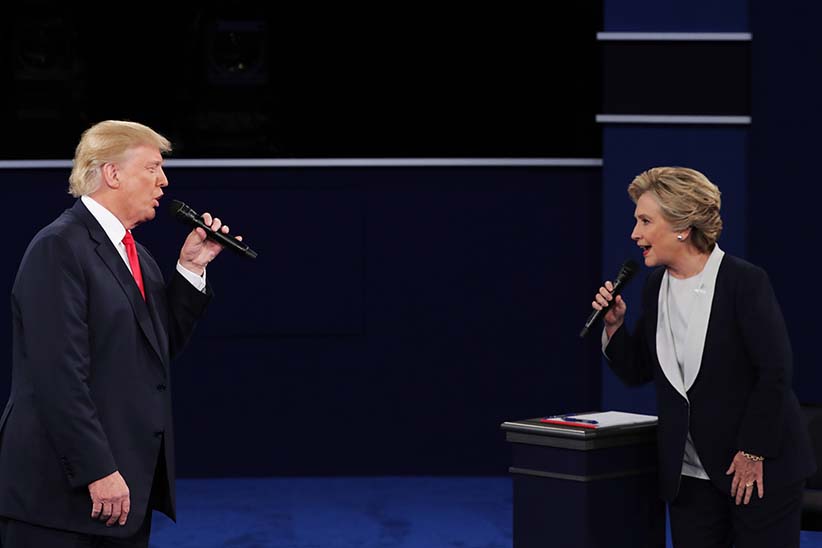 The United States has only one official language, but Donald Trump and Hillary Clinton speak very different versions of it. Following the final presidential debate, Maclean’s spoke with two linguists about the candidates’ command of English. Ben Zimmer is a linguist, lexicographer and language columnist for the Wall Street Journal, and Gretchen McCulloch is a linguist and blogger based in Montreal. Here’s what the language experts themselves have to say.

Q. How would you compare the two candidates linguistically?

A. We’ve got great interest in words that come out of Mr. Trump’s mouth as opposed to Clinton’s more scripted sentences. Hillary Clinton has been portrayed as robotic, someone who is trying to approximate real human emotion. Trump himself has an idiosyncratic speaking style that relies on simple words and phrases, which worked for him in the primaries but may be coming up short for him now.

Q. Trump often uses “the” in unusual ways, such as “the cyber” or “the African Americans” or “the gays.” What do you make of that?

A. Even though a definite article is supposed to bring something into focus, Trump uses it in a very general way. It’s seen by many observers as a kind of racial distancing. Often using that article seems unnecessary. [But] it is serving some function, which is to represent a group collectively rather than as individuals. I’ve written about “cyber,” which is often used as shorthand for cybersecurity and cyberterrorism. It’s this mass noun. It seems very vague, very ambiguous.

Q. Has Trump actually made up words?

A. Sometimes people are primed to hear in a certain way. When a word like braggadocious suddenly appears, it’s like, ‘What, is he just making that up?’ The word braggadocious, as an adjective form of braggadocio—that’s not a term he made up. It’s a term that, granted, isn’t very common. I think he is using “big league” as an intensifier, even if he swallows the “g” at the end.

He speaks extemporaneously, often through stream of consciousness, where it doesn’t seem to follow a trajectory. When words come out of politician’s mouth that are linguistically incorrect, people see it reflecting their intelligence. Sarah Palin was called out for “refudiate,” which seemed to combine refute and repudiate. One favourite Bushism was “misunderestimate.”

Q. How do you think Clinton came up with the term, “basket of deplorables?”

A. It’s an interesting and ear-catching phraseology. She was basically saying half of Trump supporters could be put in this metaphorical basket. Terms can be reclaimed. That term becomes emblazoned on T-shirts and bumper stickers and Twitter profiles, people calling themselves “deplorables.” These words can be taken from their context and weaponized. That weaponization of a candidate’s words against him or her is something we’re seeing a lot. The term Obamacare was used against Obama in a pejorative way, but Obama again reclaimed it.

Q. During the debate, viewers can get distracted from words by visuals such as Clinton’s smile and Trump’s nose. Should we listen with our eyes closed?

A. Even if you close your eyes, you’ll still hear Trump sniffing. Linguists might call [these visuals] paralinguistics, every form of information including facial gestures and facial features. Obviously these things get scrutinized in tremendous detail, so that a cough can be of outsized importance. [But] that’s all part of the package.

Q. Trump’s crude words caught on tape from 2005—how do you hear them as a linguist?

A. The crudeness of the language, it’s a distraction. If you play a string of words in a cocktail party, there are a few things that will get you to hone in on one voice. One of the things is your name. Another is taboo words. People hear [the clip of Trump] and call it “locker room talk” like other guys use. Everyone can use crude language. Not everyone is talking about assault.

Q. How would you compare Trump and Clinton’s command of English?

A. There have been a number of efforts to diagram Trump’s sentences and understand what they’re doing. When they look at Clinton’s, it looks like sentences. It looks like a paragraph. It looks organized. His stuff just disintegrates the more you look at it. It’s creating a word salad, which is the technical term. I really do not want to diagnose Trump with anything, but there are people who start pronouncing words that don’t seem to make any sense.

Q. How could Trump improve?

A. Not committing sexual assault is a start.

A. There are certain situations where politicians can use more folksy language to make them seem like someone you’d want to have a beer with. [But regarding Trump], I don’t know what’s going on with him. He doesn’t make any sense.

Q. What do you think will be the 2016 word of the year, as determined by the American Dialect Society?

A. Last year, the word of the year was singular “they.” I’m hearing the word, “dumpster fire” or “trash fire” to refer to the whole political state. In January, when all the linguists get together, I’m thinking I might have to nominate that.