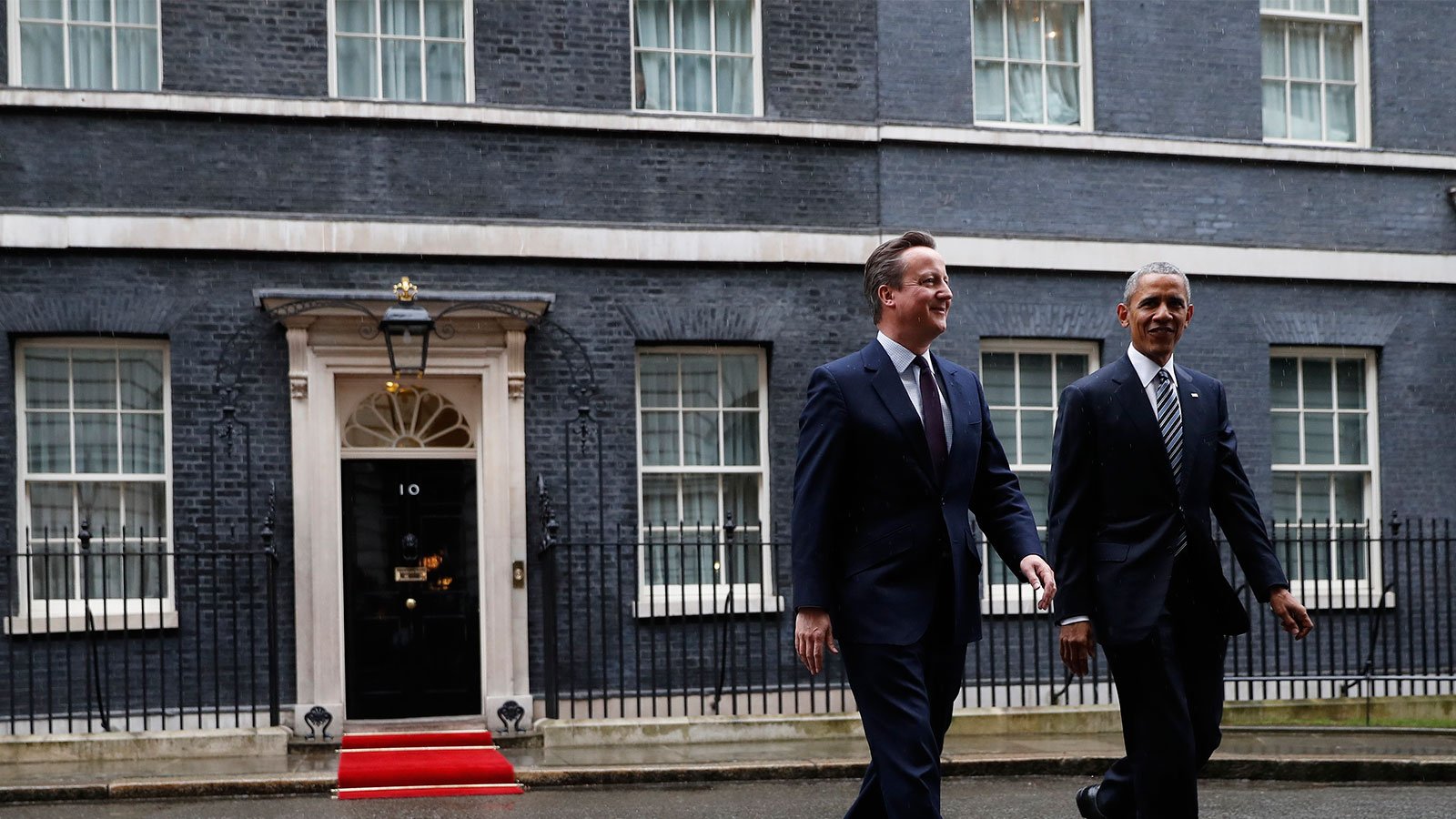 There are few events that get British politicians’ proverbial knickers in a twist more than a visit from the cool, handsome Leader of the Free World.

Last Friday, when U.S. President Barack Obama rolled into town with his phalanx of dark-suited security and the first lady on his arm, the buzz from Westminster hummed across the British capital. Officially speaking, Obama was here to attend the Queen’s 90th birthday lunch, but the timing for this not-exactly-mandatory social event seemed awfully convenient: The U.K., you might have heard, is in the middle of a referendum campaign over whether or not it should stay in the European Union. Obama arrived to make his position as a friend and ally abundantly clear: Please stay put.

In an op-ed piece published in the Daily Telegraph on day of his arrival, Obama conceded that while it is for the citizens of Britain to decide their future, he is firmly anti-Brexit. “The European Union doesn’t moderate British influence—it magnifies it,” he stated, adding that, “a strong Europe is not a threat to Britain’s global leadership; it enhances Britain’s global leadership. The United States sees how your powerful voice in Europe ensures that Europe takes a strong stance in the world, and keeps the EU open, outward looking, and closely linked to its allies on the other side of the Atlantic.”

Obama did not hold back in making his case—going so far as to outline the two nations’ shared political past, referencing everything from the formation of the United Nations, NATO, Bretton Woods, the Marshall Plan and the “tens of thousands of Americans who rest in Europe’s cemeteries” after two world wars, who act as “a silent testament to just how intertwined our prosperity and security truly are.”

Prime Minister David Cameron, who is leading the “stay” campaign, is of course reportedly delighted by this high-profile endorsement. The two leaders met over the weekend and enjoyed a chummy round of golf at the Grove Club in Hertfordshire.

But the question of whether Obama’s visit will sway many of the estimated 20 per cent of undecided voters to the stay side remains to be seen. Commentators point out that although Obama’s endorsement adds to the mounting “wall of credibility” being built by the anti-Brexit campaign, it was always expected. Other major endorsements in recent weeks have included the Bank of England, IMF, NATO, British unions and the American Treasury secretaries.

The “leave” campaign, on the other hand—led by London Mayor Boris Johnson and Justice Secretary Michael Gove—has from the outset tried to position itself as the scrappy, forward-thinking underdog for independence. In placing itself apart from the Conservative and Labour party establishment (both of which fall into the “stay” camp), it seems well poised to take Obama’s smackdown in stride.

But there have been gaffes. Boris Johnson, writing in the Rupert Murdoch-owned Sun tabloid last week, criticized Obama in advance of his arrival for being a “hypocrite,” since the U.S. enjoys precisely the sort of fiscal and political sovereignty the pro-Brexit camp aspires to. He then went on to add, rather oddly, that Obama was predisposed to have “an ancestral dislike toward the British empire” because of his Kenyan roots on his father’s side—a statement that critics dismissed as “demeaning to the debate,” and “desperate, shameful stuff.”

To make matters worse, Nigel Farage, leader of the anti-immigration party UKIP, piped up to support Johnson, saying that Obama “bears a bit of a grudge” against the U.K. Johnson later backed up this claim by pointing out that Obama had famously removed a bust of Winston Churchill from the Oval Office when he moved in. (The White House later clarified the matter by saying the bust was on loan and returned to Britain and that there is another Churchill bust in the Obamas’ official residence.)

While this seems a ludicrous argument to make in light of the endless stream of recent images—Obama riding shotgun in David Cameron’s golf cart, the Obamas being warmly greeted by the Queen and Prince Philip on the lawn of Windsor Castle, the Obamas meeting tiny Prince George in his pajamas—Johnson does have a point on the issue of sovereignty. Both the U.S. and Canada enjoy precisely the sort of open trade relations, combined with relative political and financial autonomy, that the Brexit camp would sorely love for Britain outside Europe. Early on in the debate, Gove and Johnson even held up Canada’s current EU trade agreement as an example of a possible future financial template for the U.K. (Downing Street quickly pointed out that it took several painstaking years to negotiate and Canada is an ocean away from Europe.)

In the end, President Obama was well received, despite the controversy. While the Brexit camp bristled, the President’s argument that Britain is a more effective ally to the United States within the EU was made abundantly clear. As for Churchill, Obama was unequivocal in a press conference on that too: “I love the guy,” he said. “I really do.”