Ex-wrestler sued gossip website after it released a one-minute, 41-second clip of a sex tape 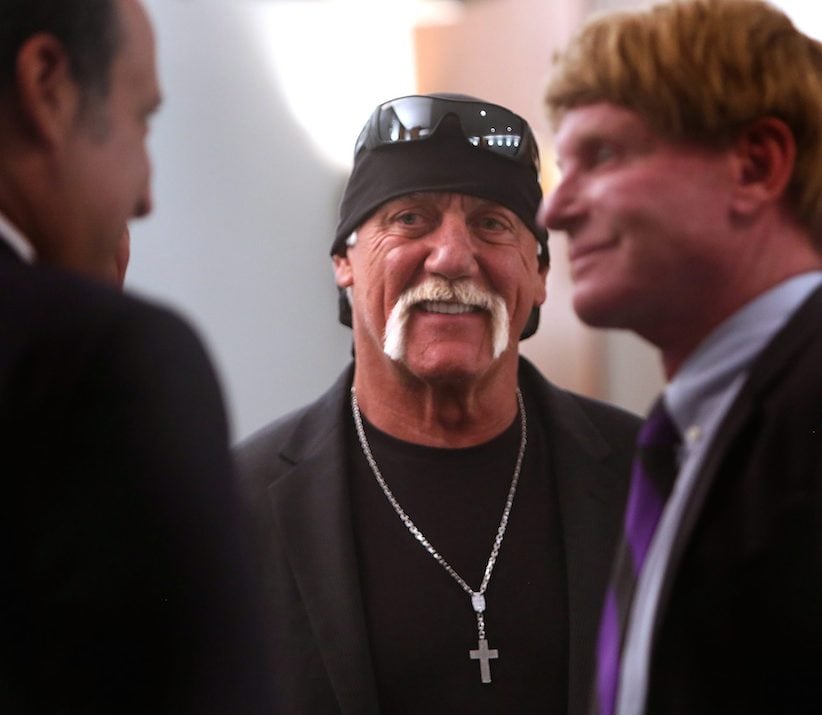 Terry Bollea, known as professional wrestler Hulk Hogan, center, talks with his attorney’s, Thursday, Oct. 1, 2015, during a recess in a hearing in the case, Terry Bollea vs. Gawker Media. (Scott Keeler/The Tampa Bay Times via AP)

ST. PETERSBURG, Fla. — Both sides in pro wrestler Hulk Hogan’s privacy lawsuit against the news website Gawker have portrayed him as a hero to little kids, a well-known entertainment figure and an American icon.

On Monday afternoon, the 62-year-old Hogan — whose real name is Terry Bollea — will take the witness stand, clad in all black including his signature bandanna, and assert that Gawker invaded his privacy and caused deep emotional distress when it posted a video of him having sex.

The civil trial, which started Monday in downtown St. Petersburg, pits the rowdy wrestling star against a maverick news-gossip website that’s known for pulling no punches with celebrities and other famous figures.

Here’s what both sides agree on: In 2006, following a messy divorce, Hogan had sex with the wife of his then-best friend, shock jock Bubba The Love Sponge Clem. Hogan’s lawyers said there were three sexual encounters; at least one of them was captured on video.

Hogan says he didn’t know he was being videoed. It’s unclear who leaked the video to Gawker and other media, but some police reports claim it was a disgruntled producer on Bubba Clem’s radio show.

An attorney for Hogan told jurors that Gawker “crossed the line” when posting the video, portraying Gawker founder Nick Denton and his reporter as reckless and profit-hungry.

“They knew what they were doing, but they didn’t care.”

Hogan is seeking $100 million in damages for emotional distress and invasion of privacy.

Gawker says the publication was a legitimate scoop because Hogan had talked openly about his sex life before, in forums such as Howard Stern’s radio show.

The lawyer for the New York-based website says Gawker has a right to address uncomfortable subjects, reject spin by celebrities and tell the truth.

Gawker attorney Michael Berry told jurors during opening that the media company doesn’t know who sent the video of wrestler Hulk Hogan having sex with his then-best friend’s wife.

He acknowledged that Gawker broadcast one minute and 41 seconds of the 30-minute video in 2012 and that around nine seconds of the edited video included sexual content. Gawker’s reporter, A.J. Daulerio, posted the video to accompany a story about how celebrity sex tapes fascinate the public — while being lacklustre.

As far as Gawker making money off the post, Berry said it didn’t. Advertisers don’t post ads on Gawker’s items that are labeled “NSFW,” or “not safe for work.”

Berry says news of the tape, including screen shots, was on other gossip sites before Gawker published the video. He added that Hogan even talked about the video’s existence on national television and radio shows.

The lawyer added that Gawker was built on the idea that the public shouldn’t have to accept spin from advertisers and publicists, and that Gawker isn’t beholden to “these elites.”

He added that Gawker founder Denton “wants people to know the truth. The simple unvarnished truth.”

The trial is expected to last three weeks.

Hogan attained pro wrestling stardom in the 1980s and 1990s, winning multiple championships. He also became a celebrity outside the base of his “Hulkamania” fans, appearing in numerous movies and television shows, including a reality show about his life on VH1, “Hogan Knows Best.”