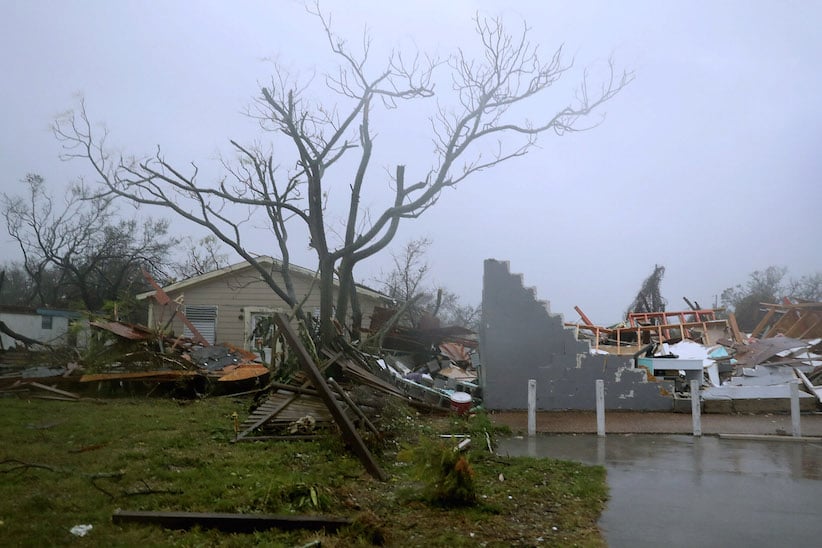 A damaged home is seen after Hurricane Harvey passed through on August 26, 2017 in Rockport, Texas. Harvey made landfall shortly after 11 p.m. Friday, just north of Port Aransas as a Category 4 storm and is being reported as the strongest hurricane to hit the United States since Wilma in 2005. (Photo by Joe Raedle/Getty Images)

WASHINGTON — George W. Bush never recovered from his flyover of Hurricane Katrina’s devastation. Barack Obama got a bipartisan boost late in his re-election campaign for his handling of Superstorm Sandy.

Now, President Donald Trump confronts the political risks and potential gains that come with leading the federal government’s response to a deadly and destructive natural disaster. Hurricane Harvey, the massive storm that has dumped torrents of rain across Texas — flooding Houston and other cities — is the first major natural disaster of Trump’s presidency, and the yet-to-be-determined scope of the damage appears likely to require a years-long federal response.

The White House has sought to paint Trump as eagerly engaged in the initial response, including announcing plans for him to travel to Texas even before Harvey made landfall. The White House press office released photos of Trump, decked out in a “USA” hat, being briefed by top officials. Trump has also sent about two dozen tweets about the storm since Friday, cheering on emergency responders — “You are doing a great job — the world is watching!” he wrote — and marveling at the size of the hurricane.

“HISTORIC rainfall in Houston, and all over Texas. Floods are unprecedented, and more rain coming,” Trump wrote on Saturday.

MORE: Is Hurricane Harvey a harbinger for Houston’s future?

Trump advisers are well-aware that the hurricane poses a significant test for the White House, which has largely been mired in crises of its own making during Trump’s first seven months in office, including the president’s widely-criticized response to white supremacist protests in Charlottesville, Virginia. Trump, who ran a real estate business and starred in a reality show before taking office, also has no practical experience in the kinds of recovery efforts that will be required in Texas and has struggled at times to show competency in governing.

In a surprising move, the White House announced Trump would visit Texas before it became clear where the storm would hit or how bad the impact would be. Administrations often tread carefully in planning such trips, given that presidential visits are an enormous logistical undertaking and can pull local law enforcement resources away from the disaster recovery efforts.

Aides said it was Trump who pushed for the White House to make his desire to travel to Texas known early. Speaking to reporters in the Oval Office Monday, he said he would travel on Tuesday and may also return to the area on Saturday. The exact location of his stops is unknown, though he’s all but certain to avoid Houston, where flooding has wreaked havoc on the nation’s fourth-largest city.

The optics of a president’s initial response to a natural disaster can be long-lasting. Bush was haunted by his now-infamous declaration that then-FEMA Director Michael Brown was doing “a heckuva job” — a statement that appeared wildly off base after the full scope of the devastation became clear. Images of Bush peering down at the flooding in New Orleans from Air Force One also furthered the impression that he was detached from the horrific conditions on the ground.

“He understands why that picture became a metaphor,” said Dana Perino, who was serving as deputy White House spokeswoman at the time.

Trump offered his own sunny assessment of the response efforts while the rain was still pouring down on Houston and other Texas towns. He cited the “great co-ordination between agencies at all levels of government” and declared, “We have an all out effort going, and going well!”

Texas Gov. Greg Abbott has so far praised the federal response to Hurricane Harvey, which has been blamed for at least two confirmed deaths. But with nearly 2 more feet of rain expected, authorities worried whether the worst was yet to come.

On its own, a successful federal response to Hurricane Harvey is unlikely to reshape Trump’s presidency. But with his approval rating perilously low, it could help Trump convince some Americans that he has the capability to lead the nation through difficult moments.

Trump’s predecessors have also benefited from the political opportunities that can arise after natural disasters.

When Superstorm Sandy barrelled across the East Coast days before the 2012 election, Obama paused his campaign to monitor the federal response from Washington. He travelled to hard-hit New Jersey, where Republican Gov. Chris Christie, a strong supporter of the president’s rival, lavished praise on the president.

Obama advisers said at the time that while they didn’t believe the president’s Sandy efforts were a deciding factor in the election, the praise he received from Republicans was helpful in the midst of a highly partisan campaign.