If you only read one book about Trump over the holidays, make it this one

We've surveyed the many books on the U.S. president so you don't have to 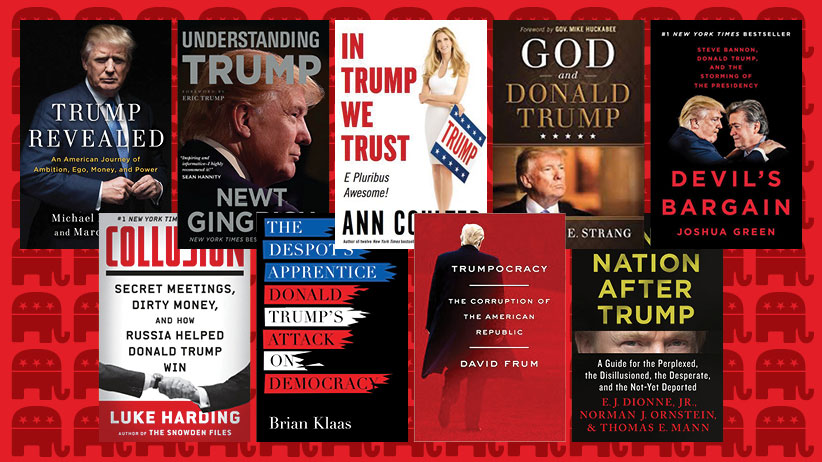 There have been books about Donald J. Trump for more than 30 years now, although for most of that time they were written by him too, or at least had his name as author on the cover. But that all changed after June 16, 2015, when Trump came down the escalator at Trump Tower, neatly sorted Mexicans into four types (drug smugglers, generic criminals, rapists, good people) and started on the road to becoming U.S. president. In a little over a year, there were a solid dozen takes on Trump in bookshops, most—like Trump Revealed: An American Journey of Ambition, Ego, Money, and Power by Michael Kranish and Mark Fisher—bearing the sort of subtitle that makes an author’s point of view quite clear.

Those books were, on the whole, rushed into print, meant to capitalize on a moment—Trump’s candidacy—that was not expected to last or to have serious consequences. After the Republican candidate exceeded expectations and actually won election 13 months ago, the flood of titles became a tidal wave: a search for “Trump” on Amazon’s Kindle Store currently yields almost 6,000 items. So what is a poor reader to do? What is the Trump title tutti titles for those whose Christmas wish is a one-shot explanation of a convulsive political phenomenon?

Depends, of course. Are you friend or foe? For the former, Newt Gingrich, one-time Speaker of the U.S. House of Representatives, has Understanding Trump, complete with introduction by presidential son Eric Trump and blurb (“inspiring”) by Fox TV’s chief Trump cheerleader, Sean Hannity. The book is all about the great things Trump will do, including a permanent Mars base, should he be wise enough to pay heed to Gingrich. But the author is more concerned with his own deep thoughts than with the president himself, and the book has little to justify its title, even among friends. That’s not the case with Ann Coulter’s 2016 book, In Trump We Trust. Despite one-per-page bursts of gibberish—“New Hampshire’s heroin epidemic is entirely a result of Mexican drug cartels streaming over our non-existent border”— Coulter, precisely because she is a true believer, is very illuminating about the crude xenophobia that helped propel Trump into the White House and which continues to motivate his most intensely loyal supporters.

Perhaps not all of them, though. One of the more eye-popping pro-Trump books is evangelical journalist Stephen Strang’s November release God and Donald Trump. It argues both that it was divine providence which raised Trump to the highest office in the land and, even more improbably for Trump opponents, that the president’s Christian faith has grown and strengthened in office. Strang’s book may not fully explain why white evangelical Americans flocked to Trump, but it lays out the narrative that allows them to maintain that embrace.

For those who loathe Trump

But in truth Trump has nowhere near widespread support in America and even fewer admirers in Canada, and most Trump titles are aimed at that audience. If there was anything supernatural about Trump’s victory, journalist Joshua Green finds its origins in a direction opposite to Strang’s. Devil’s Bargain lays out the case for seeing former campaign manager Steve Bannon’s hard right hand and genius for channeling racial and economic grievances behind Trump’s victory. Collusion, by former Guardian Moscow bureau chief Luke Harding, points the finger elsewhere. It connects Trump-Russia dots—from Paul Manafort and Michael Flynn to sketchy real estate deals and the Miss Universe pageant—like no other book. For readers who want to know what Special Prosecutor Robert Mueller is grappling with, and what may come of his investigation, this is the volume.

For other writers, how Trump came to office pales in importance with the destruction he is wreaking while there. In behaviour as much or more as in policy, Trump has brushed aside generations of presidential norms. Brian Klaas’s The Despot’s Apprentice: Donald Trump’s Attack on Democracy portrays a president admiring of dictators and all too ready to adopt their tactics, from attacking the media to staffing the White House via nepotism. In January, David Frum’s Trumpocracy: The Corruption of the American Republic will examine just how permanent that damage may be.

And the best in class of Trump books is…

Russia, Bannon, the hand of God (or Satan), assaults on the media, eroding democracy—what many readers are going to want here is not an explanation, however detailed and convincing, but a survival guide. Perhaps the most optimistic word to appear in a Trump title is “after,” with all its connotations of hope or even a mere return to normality. The best in class, and the best one-stop Trump book (at least for foes) is One Nation After Trump: A Guide for the Perplexed, the Disillusioned, the Desperate and the Not-Yet Deported by scholar-journalists E.J. Dionne, Norman Ornstein and Thomas Mann. Definite as they are about what they see as the harm already done and the dangers looming on the horizon, the authors are also energized by the intense political activism that has arisen in reaction to Trump.

The women’s marches, the angry reaction in public meetings to the proposed repeal of Obamacare, and the widespread protests against the Muslim travel ban are all hopeful signs to the authors—baby steps toward a more equal and democratic society. They stress how Hillary Clinton’s Democratic campaign against Trump failed to connect with Americans’ worries—if the left and centre have no appealing economic agenda they merely open the door to nativist fantasies. What the U.S. needs include a “charter for working families” that would include wage subsidies, life-long skills training and, perhaps most importantly for a gig economy, portable health-care benefits. Beyond that, the authors call for a return to local responsiveness among progressives too inclined to “instinctive” cosmopolitanism, a drive to teach democratic citizenship in public schools, perhaps national service, mandatory voting and steps to combat fake news. It might sound like pie in the sky, but Dionne, Ornstein and Mann see the seeds of it all around them, growing in the Trump resistance. Hope is better than fear, Jack Layton once wrote, and optimism better than despair. Here’s the book to demonstrate it.

WATCH: Trudeau tries not to react while listening to Trump