It was a humbling evening for Donald Trump, who placed third 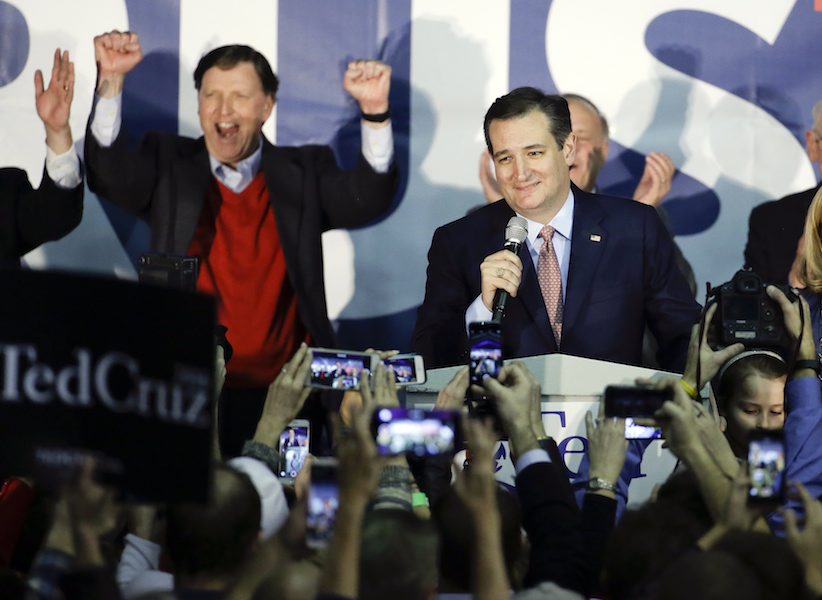 WASHINGTON — A conservative firebrand survived weeks of flame-throwing over his Calgary birth to make history Monday as a Canadian-born winner of a major United States presidential contest.

A dual citizen until recently, Alberta-born Ted Cruz won the first-in-the-country nomination contest, taking the Iowa Republican caucuses despite being bombarded with questions about his eligibility by Donald Trump.

The billionaire’s birtherist broadsides failed against Barack Obama four years ago and they didn’t work in Iowa, either: thanks to a superior organizational-and-turnout effort, Cruz exceeded pollsters’ expectations and won by about four percentage points.

It was a humbling evening for Trump. He almost fell into third place, behind a jubilant Sen. Marco Rubio. As for the normally bombastic Trump, he was gracious in defeat: “I’m just honoured. I’m really honoured, and I want to congratulate Ted… Iowa, we love you… I think I might come back here and buy a farm.”

Trump expressed optimism that he’ll go on to win the nomination. He made sure to mention his bigger leads in the polls in New Hampshire — which votes next week, and which has a very different political makeup from Iowa with far fewer religious voters.

Cruz staked his campaign on the midwestern state’s social conservatives. He launched his bid last year at an evangelical Christian university, and religious voters appeared to reward him Monday.

Styling himself as the staunchest right-winger among the Republican frontrunners, the first-term Texas lawmaker went out of his way to draw attention to his prickly relationship with his Senate colleagues — none of whom have endorsed him.

He has parried Trump’s attacks over his unpopularity with colleagues by branding himself as an outsider, in tune with the insurrectionist spirit rippling through the party.

That anti-establishment mood was potent enough Monday to relegate the fat-walleted campaign of the presumed frontrunner entering the race, Jeb Bush, to an embarrassing sixth-place finish.

On the Democratic side, meanwhile, the establishment favourite was sweating. Hillary Clinton was clinging to a nailbiting lead of less than half a percentage point over the underdog challenging her from the left _ Sen. Bernie Sanders.

Among Republicans, Cruz took about 28 per cent. Trump badly under-performed his poll numbers to finish with 24 per cent. And Rubio finished a strong third with 23 per cent, making him an early contender for the support of the more moderate mainstream as the race shifts to New Hampshire next week, then to southern states.

The state has a dismal track record of predicting the nominee: in contested years, it’s only picked the eventual Republican winner two of the last seven times. Of the more than 1,200 delegates required to win the nomination at this summer’s Republican convention, Iowa confers only confers 30, to be split among the frontrunners.

But the results have mattered in other ways: Every big-party nominee of the modern era has won one of the first two contests, and Iowa has divided the field into contenders and no-hopers. Mike Huckabee, a former Iowa winner, immediately suspended his campaign Monday.

For his part, Rubio emerged as a first-tier player, which will cause nervousness among Democrats: he is perhaps the only candidate in his party to consistently beat Clinton in hypothetical head-to-head polling matchups.

The state has a far better track record of picking the Democratic winner.

And Clinton was seeking to cement her frontrunner status within that party. With votes still being counted late Monday, she was on the verge of snapping a family jinx.

In a state that produced heartbreak for her in 2008, that dealt her husband a withering fourth-place defeat in 1992, she clung to a paper-thin lead of less than one-fifth of a percentage point.

But even a narrow victory could slow her dark-horse challenger. To defeat Clinton, Sanders would have to repeat the momentum-building triumph of Barack Obama in 2008 _ when he closed a huge gap with her in later-voting southern states.

The latest polls show Clinton with a 40-per-cent lead in South Carolina. Sanders leads in New Hampshire, and had been hoping a two-for-two sweep might reverse the trend in the south.