In The Netherlands, a Pyrrhic victory against nationalism 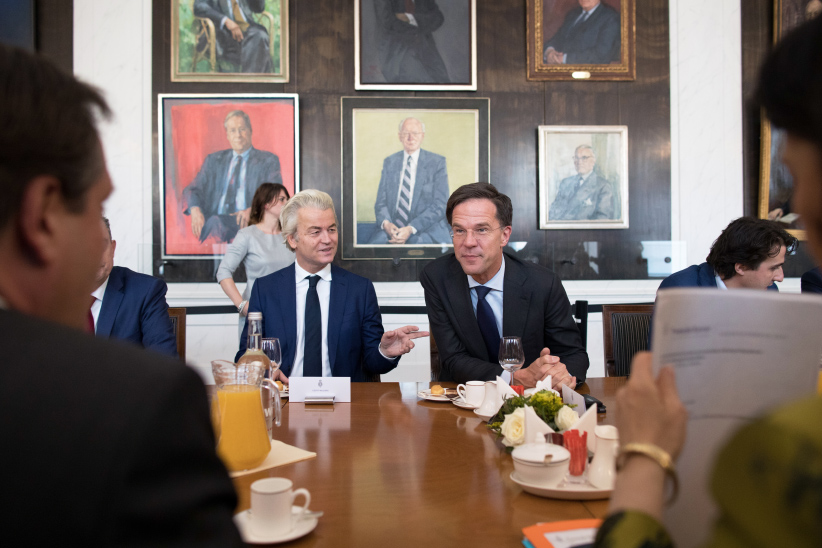 Geert Wilders, leader of the Dutch Freedom Party (PVV), left, and Mark Rutte, Dutch prime minister and leader of the Liberal Party (VVD), speak during a meeting at the House of Representatives at the Dutch Parliament following the national elections in The Hague, Netherlands, on Thursday, March 16, 2017. (Jasper Juinen/Bloomberg/Getty Images)

No one really wins a Dutch election, so the popular wisdom goes—and this week’s vote was no exception.

While Prime Minister Mark Rutte of the centre-right VVD party is positioned to stay the course, Wednesday’s vote left the political landscape of the Netherlands much-changed. The far-right populist movement of Geert Wilders’s Freedom Party ultimately stumbled, though it did gain five seats, coming in second place with 20 seats behind Rutte’s 33 (a loss of 8 seats from the last election).

But the Dutch parliamentary system requires that the winner—in this case Mark Rutte—achieve an outright majority in order to form a government, and in the absence of a clear winner, a coalition must be formed. Of the 150 seats in Dutch parliament, Mr. Rutte’s coalition must account for at least 76. It won’t be easy, since the PM has sworn he will not collaborate with Wilders, his anti-immigrant, Islamophobic opponent.

Because the Netherlands lacks multiple electoral ridings, seats are allocated roughly in proportion to each party’s share of the national vote. This makes it easy for small, often single-issue parties, such as Freedom or the Greens, to enter parliament. It also means the Dutch parliament is a patchwork of competing political platforms and interests, ranging from the far left to the deeply Christian and conservative. Mr. Rutte will have his work cut out for him negotiating a coalition in the coming weeks.

Luckily, there is historical precedent. No single Dutch party has won a clear majority in modern history, so Mr. Rutte—who has already served two terms as PM—and his Dutch political colleagues are well-versed in the art of negotiating political compromise.

But despite this increasingly fragmented political landscape, Mr. Rutte and his supporters celebrated his victory as one that saved the Netherlands from “the wrong kind of populism.” He promised his party would “hold our course, and keep this country safe, stable and prosperous.”

In fact, Mr. Rutte’s victory was in many ways down to timing and luck. He was polling neck-and-neck with his far-right opponent until late last week when a diplomatic spat with Turkey provided political manna from heaven. After the Dutch government refused to allow a Turkish minister to land her plane in Rotterdam on the grounds it would exacerbate religious tensions in the country, Turkish President Recep Tayyip Erdogan accused the Dutch government of “nazism.” Mr. Rutte’s firm-yet-even-handed response was widely praised.

The Dutch election was closely watched within the Eurozone, too. With France and Germany also heading to the polls later this year, the hope is that Mr. Rutte’s victory signals stability for the EU (like most far right populists, Wilders is also vehemently anti-Europe). The victory of centrism is a slightly hollow one, however; Mr. Rutte did, after all, lose nearly a quarter of his seats. And Wilders—who campaigned on a platform of banning immigration and asylum-seekers, the public wearing of hijab, all mosques and Muslim schools as well as the Quran, a process he described as the “de-Islamification” of the Netherlands—showed no signs of being cowed by the result. Like a villain in a 19th-century melodrama, Wilders warned Mr. Rutte that he “has not seen the last of me,” and told his supporters the so-called “patriotic spring” was yet to come.

That Wilders managed to increase his party’s seats by a quarter despite being convicted of spreading hate crimes against Dutch-Moroccans—whom he openly referred to as “scum” in his speeches—shows that there has been a significant political shift in the Netherlands. Once considered a bastion of openness and tolerance, this tiny, socially-liberal country must now reconcile itself to the fact that it strengthened the standing of an Islamophobe in opposition. For the rest of Europe, it looks like the new normal.