The visit highlights warming ties between the rising Asian powers despite their continuing rivalry and contrasting political systems. 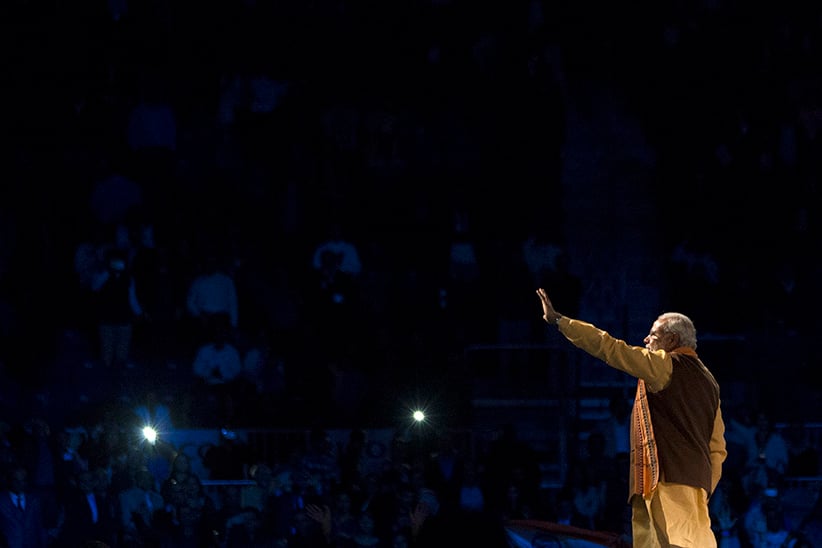 XI’AN, China – Lion dancers and flower-bearing children welcomed Indian Prime Minister Narendra Modi on Thursday to central China where President Xi Jinping planned to show him a touch of personal diplomacy that is rare for a Chinese leader.

Modi arrived at the airport in Xi’an clad in a traditional Indian costume. He then visited the museum with China’s famed Terra Cotta Warriors and a Buddhist temple housing works translated from Sanskrit. In the afternoon, he was scheduled to hold a lengthy meeting with Xi, whose family hails from the region.

Amid heavy security, large crowds turned out to greet Modi’s motorcade, prompting the prime minister to tweet: “Am very glad to see the enthusiasm among the people of China. People-to-people ties are always special.”

By hosting Modi in his home province of Shaanxi, Xi is reciprocating the Indian leader’s invitation to Xi to his own hometown of Ahmedabad last year. Chinese leaders almost never receive their foreign counterparts in anything other than formal settings in Beijing.

The visit highlights warming ties between the rising Asian powers – the world’s most populous nations with a combined 2.6 billion people – despite their continuing rivalry and contrasting political systems. That trend has been given added impetus by the personal authority enjoyed by the two men, who are widely seen as their countries’ strongest leaders in years.

China is looking to India as a market for its increasingly high-tech goods, from high-speed trains to nuclear power plants, while India is keen to attract Chinese investment in manufacturing and infrastructure. With a slowing economy, excess production capacity and nearly $4 trillion in foreign currency reserves, China is ready to satisfy India’s estimated $1 trillion in demand for infrastructure projects such as airports, roads, ports and railways.

Modi’s top priority in China is finding ways to reduce India’s $48 billion trade deficit with its neighbour through greater market access for Indian goods and services and by convincing Chinese companies to manufacture in India.

Indian and Chinese officials have said the sides plan to sign investment deals and trade agreements during Modi’s visit worth about $10 billion, the official China Daily newspaper reported Thursday.

Xi and Modi are also expected to discuss efforts to end a border dispute that sparked a bloody monthlong conflict in 1962. No resolution is expected soon, although the sides have been in close contact to avoid flare-ups.

India has also grown increasingly concerned about forays by Chinese naval vessels, including submarines, into what New Delhi considers its strategic backyard. China’s navy is active in the Gulf of Aden as part of anti-piracy patrols, and Beijing has heavy invests in port facilities in Sri Lanka and Pakistan.

Another divisive issue is China’s deep ties with Pakistan, India’s archrival, where Xi received a lavish reception last month. China has committed to invest up to $46 billion in Pakistani power generation and other projects.

Meanwhile, the presence of Tibetan spiritual leader the Dalai Lama in India rankles Beijing, although New Delhi has avoided using him as a diplomatic foil. China reviles the Buddhist cleric, who fled to India in 1959, as a separatist.

Modi will talk with officials including Premier Li Keqiang in Beijing on Friday before going to Shanghai for activities focusing on trade relations.