Inside Scotland’s quiet fight for itself

What Scots really want is better government. Why did it take the U.K. so long to catch on? 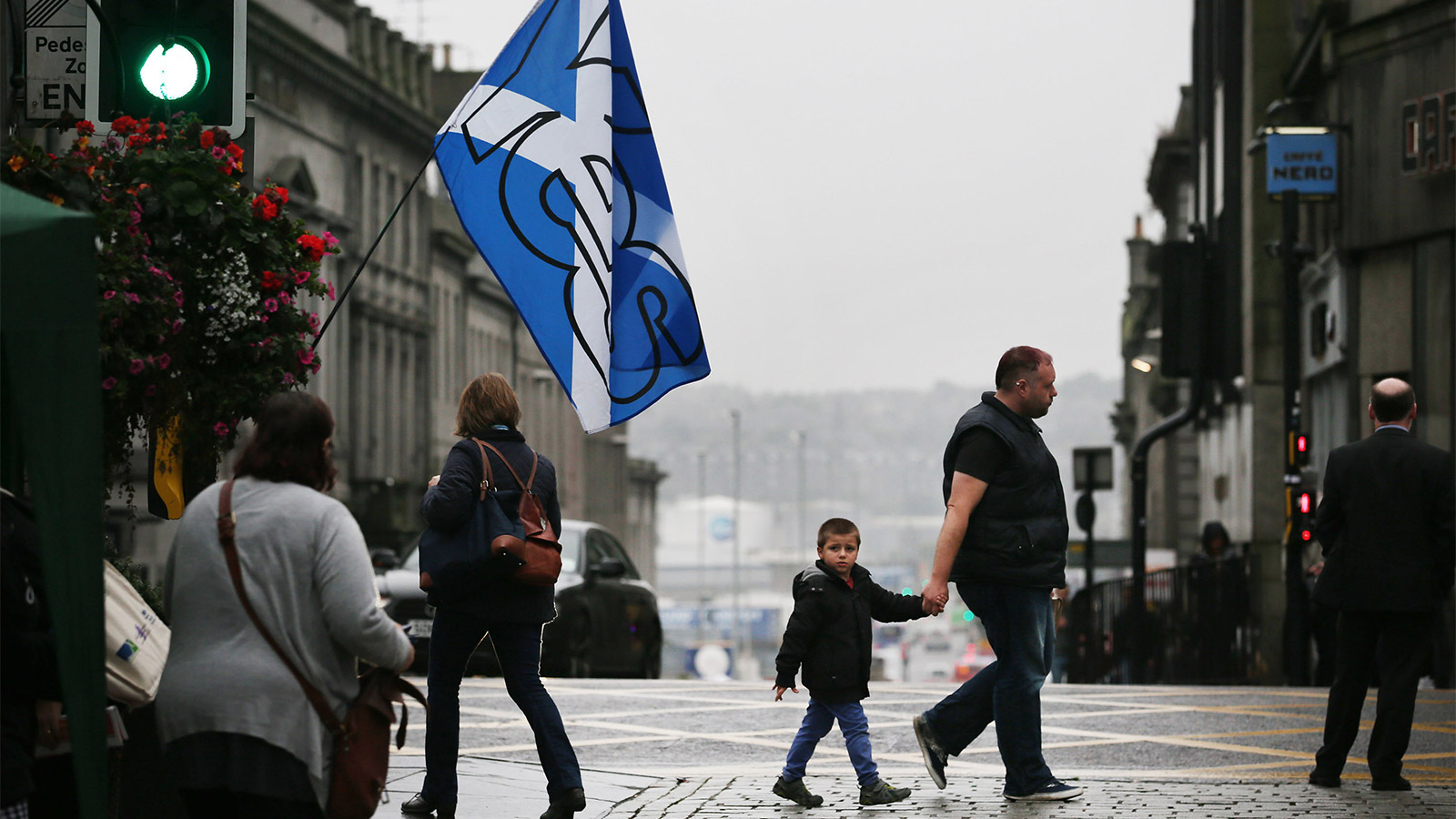 Scotland votes on its independence today. (The Associated Press)

What was striking about Scotland in the week before its independence referendum was how quiet it all was. You could go for days, as I did in Edinburgh, without hearing voices raised in anger in public. And apart from the odd Yes or No lapel pin, there was hardly any visual evidence of a society grappling with existential questions.

What little campaign paraphernalia there was, however, overwhelmingly supported the Yes side. As a Saturday-morning train pulled into the east-coast town of Kirkcaldy, the only signs visible in people’s windows supported the Yes. This state of affairs must have been particularly preoccupying to the man who has been Kirkcaldy’s member of Parliament for 31 years, Gordon Brown.

Brown was the unofficial voice of Scotland in Tony Blair’s cabinet long before he replaced Blair as Britain’s prime minister in 2007, and one of Scotland’s leading voices in the Labour Party long before he and Blair formed government in 1997. He has been of little use to Labour since he narrowly lost the 2010 election and was enjoying semi-retirement. But the Labour leader who replaced him, Ed Miliband, is a barely lifelike Londoner, and the Tory Prime Minister, David Cameron, is an Eton and Oxford man who needs Google Maps to find Scotch in Glasgow.

So late in the referendum campaign, after support for the Yes surged beyond anyone’s expectations, Brown was pressed into service to speak to Scots in a language they can understand. Not just the hard and flinty accent, but the notion that British government could once again reflect Scottish priorities, if only Scotland would reject the adventure of secession.

On this particular morning, Brown was addressing 120 constituents in a spartan community hall. Almost all were No supporters; a dozen Yes supporters waiting outside would heckle them later with no real enthusiasm. Three other local politicians spoke, haltingly, before Brown. When his turn came, Brown stepped away from the lectern they had used and its stationary microphone. He had tiny battery-powered microphones clipped to his lapel and necktie. The ease with which he spoke from memory showed why he was worth pressing into service. The only mystery, which remains, is why it took so long: why the campaign to preserve the United Kingdom waited until everything was almost lost before it finally decided to start taking this fight seriously.

Brown has been advocating a measure of devolution, the exercise of some lawmaking powers by a Scottish assembly, all his career. Now he was promising more, while warning that independence was a radical solution that would ruin all the gains Scotland has won. The No camp, he said, now offered “a stronger Scottish Parliament with more powers, delivered quickly, as part of the United Kingdom—with powers over welfare, over taxation and over jobs, in addition to the powers that Parliament has already had.” This was, he insisted, “a safer, better, faster, fairer, friendlier option than the irreversible separation” that Alex Salmond, the independence-seeking leader of the Scottish National Party and first minister in the Scottish Parliament, was seeking.

It was classic No rhetoric for any referendum on any subject: The status quo was fine and, indeed, would only get better, as long as nobody did anything rash. “Rash” here meant voting Yes. “Never before have I seen so many warnings in such a short time about so much damage that would be caused by the irresponsible policies of the Scottish National Party,” Brown growled.

The Yes protesters milling outside the hall offered insight into why Brown’s intervention was even necessary. Many were lifelong members of his own party, now disillusioned. “I’ve been Labour for 30 years,” Eleine Seefeldt told me. “I was blinded. I didn’t read anything; I just trusted Labour.”

What lost her for Labour wasn’t the 2010 election, when David Cameron managed to put together a government despite having only one Conservative MP from all of Scotland. Scotland has been thinly represented in Conservative governments before. It was the sight of Brown’s replacement, the pasty and unsteady Labour Leader Ed Miliband, that did it for Seefeldt.

“Here I was, just listening to a man who was talking from a script,” she said. “I didn’t feel he was interested in Scotland, except in our votes.” 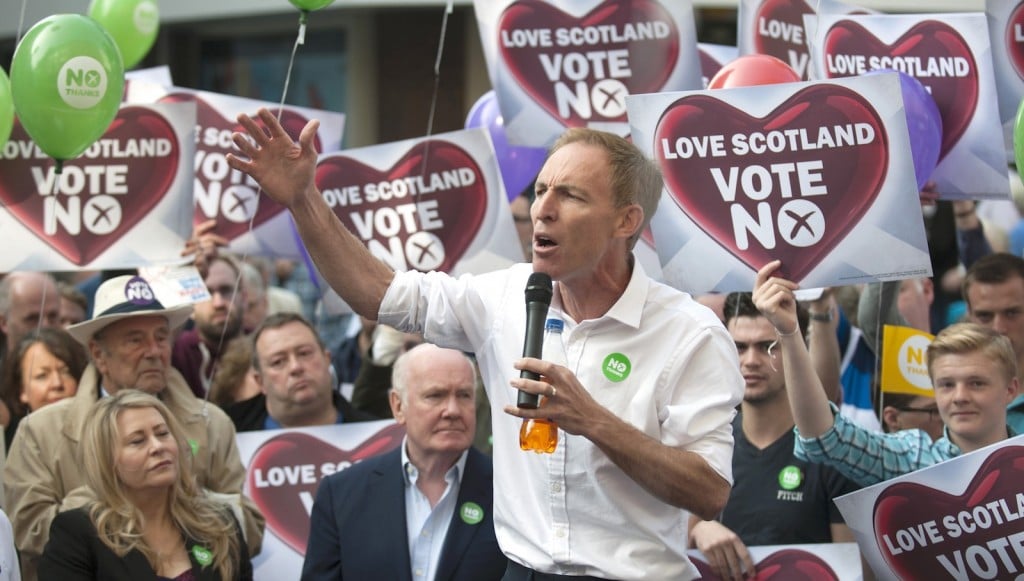 Member of Parliament and Shadow Secretary of State for International Development Jim Murphy speaks from a soapbox in support of the Union on the final day of his 100 Streets in 100 Days Better Together tour, on Sauchiehall Street, Glasgow, Scotland on Saturday. (Jane Barlow/The Associated Press)

It was this pervasive sense of dissatisfaction with the current generation of politicians in London that led Brown to insert another line into his speech. It was important to take the long view, he said. “We can’t just think of ourselves. And we can’t even just think of this year. We can’t reject one policy of someone, somewhere else. We can’t just make it a matter of which government we don’t like, or which politician we don’t like. We’ve got to think of the big, big issues.”

In other words: Never mind that it’s been a long time since Scotland enjoyed so little clout at Westminster. Remember the good old days. It was the same sentiment that led John Reid, another silverbacked Blairite Labour Scot, to remind an Edinburgh audience of the influence of two 18th-century Scots, Adam Smith and David Hume, on British economic and political thinking. This suggests a rule of thumb for British politics: If you’re stuck citing Smith and Hume on a campaign’s last weekend, you’re in trouble.

What Salmond was doing, meanwhile, was promising a kind of utopia: a nuclear-free Scotland entering NATO on its own terms while enjoying lower taxes, higher benefits and improved BBC service. If anyone disagrees, he suggested, they are biased, or knuckling under to intimidation from David Cameron. Salmond’s glibness can be frustrating. When the BBC’s political editor, Nick Robinson, hectored Salmond at a news conference because he believed Salmond hadn’t answered a question properly, video of the confrontation went viral on the Internet. To Yes supporters, it confirmed the belief that big, shadowy institutions were out to get them. A large crowd descended on BBC headquarters demanding “balanced” coverage more like what they could find on a number of highly popular pro-Yes blogs.

Yes supporters, in a movement that was far more decentralized and grassroots-driven than the “Better Together” organization that ran the No campaign, filled in any blanks in Salmond’s discourse with whatever struck their fancy. A sign on a fence near the Scottish National Gallery in Edinburgh invited passersby to suggest what they’d like to see in the constitution of an independent Scotland. “No palm oil,” one person wrote in response. “Stop Zionists messing up U.K. politics,” said another. Others said London has failed for generations to properly exploit Scotland’s offshore petroleum reserves.

What’s little short of astonishing for a visiting Canadian who has watched the Parti Québécois slowly self-immolate in an orgy of nativist identity politics is the extent to which Salmond and the Yes campaign are eager to distance themselves from appeals to any narrow notion of Scottishness. “Scotland is not oppressed and we have no need to be liberated,” Salmond wrote in a consultation document laying the ground for this referendum two years ago. The problem was simply one of administrative efficiency. “Independence matters, because we do not have the powers to reach our potential.” Yes campaign spokesmen have repeatedly told reporters that this vote “has nothing to do with identity.”

Obviously, this is at least mildly disingenuous. If this wasn’t about identity, the Yes campaign wouldn’t bother to feature the blue-and-white Scottish flag, the saltire, in all its literature. But the Yes has mostly avoided the kind of leaden, football-thug patriotism that characterized so much of Pauline Marois’s tenure as Parti Québécois leader. On Tuesday, I went to the Edinburgh airport to watch Salmond in a photo op with business leaders. He held the event at the international arrivals gate, to emphasize that everyone would be welcome in a sovereign Scotland. One of the capitalists on hand to smile and wave with him was Mohammed Ramzan, chair of United Wholesalers, who moved to Scotland from Pakistan in 1974 and now employs 160 people. “I think we will welcome people from all over the world, no problem,” Ramzan, who has donated $1.8 million to the Yes campaign, told me. How did he expect the vote to go? “I think we’ll win,” he said with a cheerful fist bump that Pierre Karl Péladeau would recognize in an instant.

It was a surreal week. The advocates of unity were promising radical change; the lead cheerleader for independence was promising nothing would change. On the scale of the conflicts racking the world, on the scale of Syria and Iraq and Ukraine, what Salmond was advocating was mild stuff. Scotland, already recognized as a nation within a United Kingdom within the European Union and NATO, would seek to become a nation outside the U.K. and inside the EU and NATO. But, of course, this was a fight over the way Scots would think of themselves and the world. There is no way to go that deep into any nation’s psyche without changing something forever.