Iraq pushes into town near Mosul after IS assault on Kirkuk 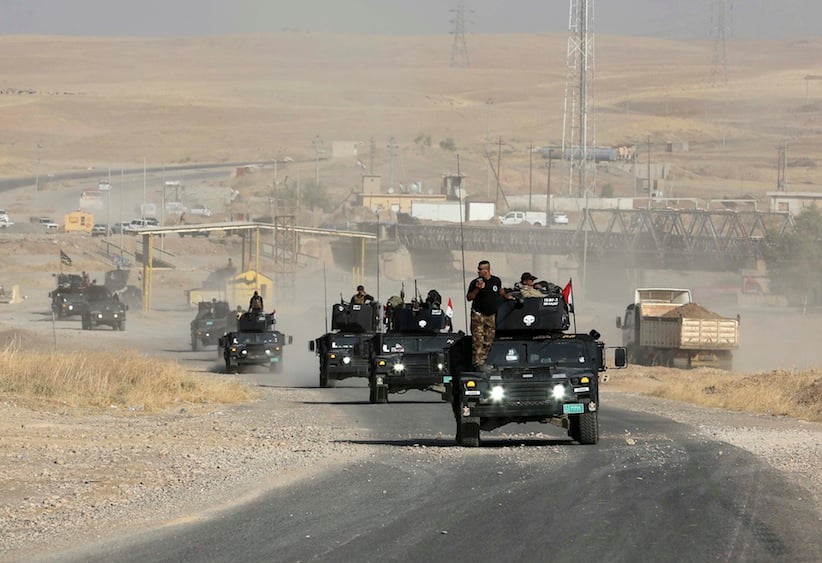 BARTELLA, Iraq — Iraqi forces pushed into a town near the Islamic State-held city of Mosul on Saturday after a wave of militant attacks in and around the northern city of Kirkuk set off more than 24 hours of heavy clashes, with ongoing skirmishes in some areas.

U.S. Defence Secretary Ash Carter meanwhile arrived in Baghdad on an unannounced visit to meet with Iraqi commanders to discuss the offensive to retake Mosul, which the U.S. is supporting with airstrikes and advisers on the ground.

The Iraqi army said the 9th Division has pushed into the town of Hamdaniyah, also known as Qaraqosh and Bakhdida, and raised the flag over its central government compound, but the troops were likely still facing resistance in and around the town. Similar past announcements have often proved premature.

Two officers from the 9th Division confirmed troops had captured the government compound and raised the flag over it. They spoke on condition of anonymity because they were not authorized to release the information.

The town is around 20 kilometres (12 miles) from Mosul. Iraqi forces launched a wide-scale offensive earlier this week aimed at retaking Mosul, the country’s second largest city, which fell to IS in 2014.

Hamdaniyah is believed to be largely uninhabited. IS has heavily mined the approaches to Mosul, and Iraqi forces have had to contend with roadside bombs, snipers and suicide truck bombs as they move closer to the city.

Iraqi forces retook the town of Bartella, around 15 kilometres (nine miles) east of Mosul, earlier this week, but are still facing pockets of resistance in the area.

Islamic State militants launched a rocket and opened fire on an Iraqi convoy near the town on Saturday, and the Iraqi special forces in the convoy returned fire. No one was wounded in the exchange, but it highlighted the dangers Iraqi forces face in areas that have recently been retaken from the militants.

Inside Bartella, a road extending more than 100 metres (yards) was completely demolished, with all the homes on either side reduced to rubble. IS graffiti was scrawled across the walls, and the militants appeared to have renamed streets and neighbourhoods after famous fighters during the more than two years they controlled the area.

In Kirkuk, meanwhile, some fighting continued a day after IS launched a massive attack in and around the city, some 170 kilometres (100 miles) southeast of Mosul. The assault appeared to be an attempt to divert attention from Mosul.

The area around the provincial headquarters, where the fighting was heaviest on Friday, was quiet. But witnesses said there were ongoing clashes in the Asra wa Mafkudin neighbourhood, where at least two IS fighters were killed Saturday. They spoke on condition of anonymity out of security concerns.

Col. Redah Sheikh Latif of the Kurdish peshmerga forces in Kirkuk confirmed there were ongoing skirmishes between IS snipers and security forces in the neighbourhood, but said the situation was contained. He said there was also some ongoing fighting in the suburb of Wara Tappa.

On Friday the militants killed 13 workers, including four Iranians, at a power plant north of Kirkuk, and a local TV reporter was killed by a sniper in the city. It was not clear if there were other casualties among civilians or the Kurdish security forces who control Kirkuk.

Iraq launched a long-awaited operation on Monday aimed at retaking Mosul, its second largest city, which fell to IS in 2014. It is the largest operation undertaken by Iraqi forces since the 2003 U.S.-led invasion and is expected to take weeks, if not months.

Carter’s visit comes two days after a U.S. service member was killed outside Mosul, underscoring the risk that American troops are taking as they advise Iraqi forces in the fight.

The U.S. service member killed earlier this week was the fourth U.S. combat death in Iraq since the U.S. began military operations against the Islamic State in August 2014, and the first since the Mosul operation began. The service member was working with Iraqi special forces northeast of Mosul and serving as an explosive ordnance disposal specialist.

More than 4,800 U.S. troops are in Iraq and there are more than 100 U.S. special operations forces operating with Iraqi units. Hundreds more American troops are playing a support role in staging bases farther from the front lines.

U.S. military officials say that a fire at a sulfur plant in northern Iraq set by Islamic State militants on Thursday is creating a potential breathing hazard for American forces and other troops at a logistical base south of Mosul.

Two officials said that while the fire was set two days ago in Mishraq, the winds shifted earlier Saturday, sending the smoke south toward Qayara West air field, a staging area for the Mosul offensive. The officials spoke on condition of anonymity because they were not authorized to discuss the matter publicly.

They said troops at the base were wearing protective masks because of the breathing concerns, and estimated it could take two to three days to put the fire out.