Itinerary for the Trump-designed Republican convention

Highlights from the forthcoming Republican convention in Cleveland, as imagined by Scott Feschuk 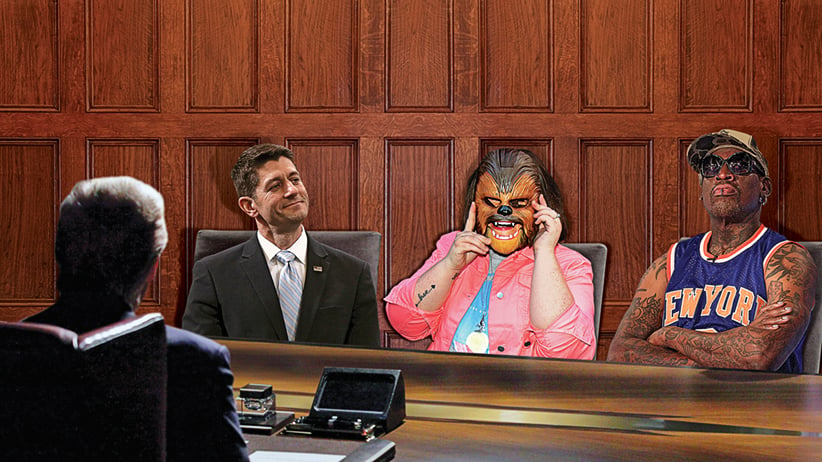 Republican organizers have started working with Donald Trump to coordinate the itinerary for the party’s July convention in Cleveland. Let’s look at some of the likely highlights:

8 p.m. Trump unveils his minority outreach strategy, which builds on a recent tweet in which he was pictured eating a taco bowl and expressing his “love” of Hispanics. Expanding on this, Trump plans to announce the concessions at the convention:

Wednesday: A calzone inside a Baconator inside a second calzone (American Americans)

9:30 Convention roll call! The delegations will cast their votes after touting some of the geographic and cultural highlights of their states (Oregon: land of pinot noir and syphilis!) At the nominee’s insistence, each delegation must also include a tally of the number of “fashion models or better” that Trump has “you know, wink, conquered” within state borders. Spoiler: Delaware’s claim of five will likely be subject to a recount.

10:45 Customer of the Year award presented to Trump by the Spray Tan Association of America.

9:00 New Jersey Gov. Chris Christie is given this prestigious prime-time opportunity to stand expressionless behind various people and objects.

9:30 Premiere of the traditional video meant to “humanize” the nominee. In an effort to help Trump connect with the average American, the film will feature shots of him making eye contact with his butler and having his pants put on one leg at a time.

10:00 Melania Trump’s speech. It is a ritual that the spouse of the nominee is granted a moment in the spotlight to give formal remarks. In a departure, Donald Trump will speak in place of (and about) his wife, delivering an address entitled: They’re Real and They’re Spectacular.

8 p.m. The entire prime-time block shall be set aside for Political Apprentice, a three-hour reality show in which Trump will choose his vice-presidential nominee. Candidates will be judged based on a range of factors:

— the ability to mostly remember which countries are where;

Odds makers predict that Paul Ryan will ultimately edge out Dennis Rodman and that Internet lady in the Chewbacca mask.

9:00 A bored Trump leans against the podium and uses the onstage video screen to flip through TV shows airing up against the Republican convention. “Scandal? Dumb. Not realistic. A black lady in charge? I don’t know if you can see me in the back—I’m rolling my eyes. And what’s this: 2 Broke Girls? From what I see on that one woman, it’s more like two huge giant [CNN abruptly puts up its Technical Difficulties graphic].

9:45 This is the slot in which a big-name American typically introduces the nominee. There are plenty of options: For example, four years later, Clint Eastwood is still talking to that empty chair. But in the end there’s only one person with the profile and reputation to do the job right: Donald Trump. The good news? This increases the probability that Trump will become the first politician to successfully speak in the fifth person. “Trump wants to thank the me who’s myself for that accurate introduction of ourselves . . . ”

10:00 The acceptance speech. Ronald Reagan spoke of his country as “a shining city on a hill.” George Bush described Americans as “a thousand points of light” in a dark world. Trump will employ a metaphor in which the exceptionalism of the United States is embodied in the timeless quality of Trump steaks.

10:55 Time for the traditional pageantry: As at every convention, 100,000 balloons fall from the rafters. This time, each balloon has been tastefully accented with Trump-logoed gold plating. There are no survivors.