Terry Glavin: The former army captain makes Donald Trump seem like a perfect gentleman. Here was his path to power 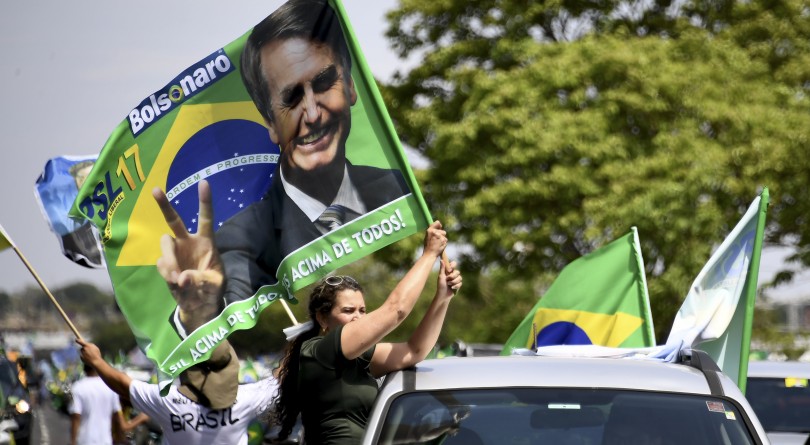 The October election in Brazil that put hard-right populist Jair Bolsonaro in the president’s office doesn’t just mark another European-type milestone in the crisis of liberal democracy—like the Euroskeptic anti-migrant Lega party securing a key place for itself in Italy’s coalition government, or the avowedly “illiberal” autocrat Viktor Orbán cementing his grip on the government of Hungary.

Brazil is the largest country in South America, with a population of nearly 210 million. Racked by economic turmoil and political chaos, its sudden backwards lurch toward a caudillo-style regime is the latest and most dramatic event in a democratic unravelling across Latin America that began with Venezuela’s Hugo Chávez and continued under Nicolás Maduro, who is now driving Venezuela to the brink of failed-state status.

Like U.S. President Donald Trump, Bolsonaro is given to vulgar shock-value harangues about minority groups, refugees, women and journalists. Like Trump’s unlikely nomination campaign, Bolsonaro’s candidacy wasn’t taken seriously until just a few weeks before Brazilians went to the polls in an Oct. 28 presidential runoff vote. But the more apt comparison would be with Filipino strongman Rodrigo Duterte, whose drug-war death squads have murdered at least 7,000 people. Bolsonaro has vowed to arm farmers tearing up the Amazon rainforest. He has spoken favourably about torture and extrajudicial killings.

So how did a marginal sideshow of a politician from Rio de Janeiro—who admits to a nostalgia for the days when Brazil was governed by a military dictatorship from 1964 to 1985—end up president of Brazil?

Brazil’s worst-ever recession began in 2014, throwing millions of Brazilians out of work, gutting the country’s middle class and precipitating a breakdown in order that caused the murder rate to soar—nearly 64,000 Brazilians were killed last year. Meanwhile, government bureaucrats were retiring early, often with full salary, their pension costs soaking up more than 50 per cent of public spending.

Brazilians wanted change, but when they looked for a way out of their predicament, they didn’t see much of a role model in, say, the centrist government of neighbouring Argentina, which was barely solvent. In June, Argentina was reduced to paying its bills with a $50-billion credit line from the International Monetary Fund, the largest in the IMF’s history. In August, the Argentine peso lost half its value, and the central bank raised interest rates to 60 per cent.

Left-wing populism didn’t hold much appeal, either. Bolivarian Chavismo had reduced Venezuela to penury. Once Latin America’s richest country, Venezuela still possesses the world’s largest oil reserves, but production has fallen to its lowest point in 70 years owing to collapsing infrastructure and the absence of investment. Nine out of 10 Venezuelans can no longer feed themselves sufficiently. Hunger, malnutrition and infectious diseases are on the rise. Hyperinflation reached 52,000 per cent in 2017. The schools are closing for lack of electricity. The hospitals are closing for lack of medicine and staff.

More than 2.6 million people have fled Venezuela over the past three years. Every day another 5,000 people stream out of the country into Colombia, Peru, Brazil and Ecuador. There have been anti-migrant riots on the Brazil-Venezuela border.

Nicaragua’s Sandinista government, once the lodestar of Latin American revolutionary ferment, has turned the country into a brutal police state. According to Amnesty International, President Daniel Ortega and his wife, Vice-President Rosario Murillo, have resorted to using weapons of war to slaughter anti-government protesters—at least 322 have been killed and 2,000 injured since protests began in April. Protesters are routinely rounded up, tortured and imprisoned on “terrorism” charges.

So when it came to voting for a new president and a new Congress in October, Brazilians faced a dire choice. They could have voted for the mild-mannered former São Paulo mayor Fernando Haddad, but he was a Workers’ Party holdover. In the initial round on Oct. 7, among a field of several also-rans, Haddad won only 31,342,051 votes to Bolsonaro’s 49,227,010.

On Oct. 28, the runoff vote put Bolsonaro over the top of the required 50 per cent, with 57,797,847 votes. Bolsonaro’s absurdly named and hitherto marginal Social Liberal Party ended up on top in the votes for Congress, too, with less than 12 per cent of the vote, owing to the vast jumble of Brazil’s political parties.

And that’s how a thuggish former army captain who has vowed to tear up the laws protecting the Amazon’s Aboriginal peoples, and who has threatened to make civil-society activism a crime, and who makes Donald Trump seem like a perfect gentleman by comparison, ended up taking control of South America’s largest country.