Joe Biden: 'For those that have been knocked down, counted out, left behind, this is your campaign'

Jaime Weinman on Super Tuesday: Biden won Virginia, where he had one field office. He won Oklahoma, where he never appeared at a rally. He won Massachusetts, never buying a TV ad. 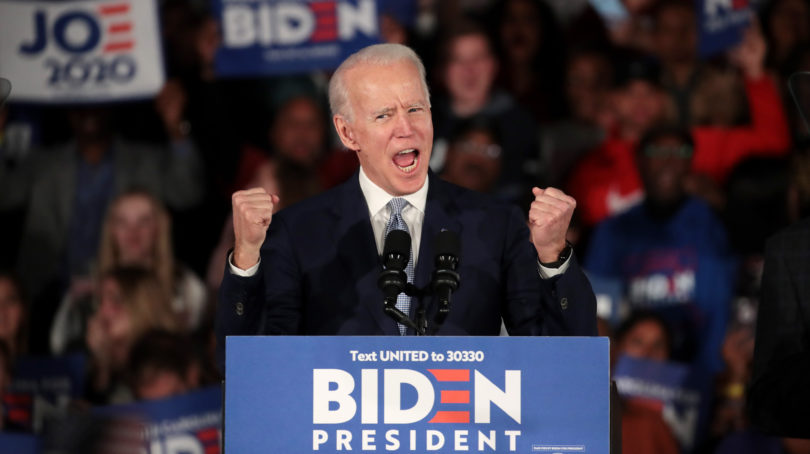 Biden speaks at his primary night event at the University of South Carolina on Feb. 29 (Scott Olson/Getty Images)

Joe Biden won at least 9 out of 14 state primaries on Super Tuesday. Until a few days ago, that seemed inconceivable. Consider this: Biden first ran for the Democratic presidential nomination in 1988. He ran again in 2008. When he won the South Carolina primary on February 29, 2020, it was the first time he had ever won a presidential primary in his life. No wonder people were slow to believe that he was actually the frontrunner for the nomination, despite months of polling that said he was exactly that. Apart from the two previous failed campaigns, he was incoherent and gaffe-prone even when younger; touched and kissed people like he was a 1970s game show host; bragged about working with segregationists. No wonder the Bernie Sanders campaign was caught off-guard in the last few days when the entire Democratic party establishment started closing ranks around Biden in a frantic effort to put him over the top on Super Tuesday. Everyone had sort of assumed that his support was a mirage, based on the name recognition he had gained in eight years as Barack Obama’s vice president.

But no, it was real. Biden won approximately two-thirds of the states holding primaries on Super Tuesday, as voters came home to Joe: in Texas, Sanders was briefly in the lead last month when it seemed, based on his poor performance in Iowa and New Hampshire, as though Biden might not be a viable candidate. As soon as South Carolina demonstrated his viability, Sanders’s lead evaporated and Biden took the state. Sometimes Biden managed to win without any of the campaign infrastructure and organizing that we hear endlessly about. Biden won Virginia, where he had one field office. He won Oklahoma, where he never appeared at a rally, and where his total campaign spending amounted to $60,000. Despite not buying any TV ads in Massachusetts, he won that state, too, currently represented in the Senate by Elizabeth Warren. Warren, remember, was once seen as the real frontrunner who would top the polls once Biden’s support collapsed. “For those that have been knocked down, counted out, left behind, this is your campaign,” Biden told a crowd last night. “Just a few days ago the press and the pundits declared the campaign dead!”

He wasn’t wrong. Biden didn’t knock Sanders out of the race, because California held its primary on Super Tuesday this year (it didn’t in 2016). While the reporting took a long time, Sanders managed a very solid win in that huge state, thanks in part to the strong Latino support he worked to build up since his last campaign. California was by far the state with the most delegates to offer, so Biden wound up ahead of Sanders in delegates, but not far ahead. The result is roughly what it was in 2016: an establishment Democrat in the lead, and Sanders within striking distance. Still, before South Carolina it looked like this was going to be the night Sanders became unstoppable, and now he’s back to being an insurgent candidate.

Obviously Biden’s big night didn’t happen just because the party threw its weight behind him (though the last-minute endorsement from Minnesota Senator Amy Klobuchar undoubtedly helped Biden win that state). They threw their weight behind him because his South Carolina victory proved that he was a more formidable candidate than they realized. What South Carolina proved most of all was confirmed by Super Tuesday’s results: Biden has a lot of African American support. Sanders does too — that’s why he’s still in the race, unlike Elizabeth Warren — but he always does better with younger voters; he couldn’t come close to Biden in Southern states with a lot of older black voters. Since many of these states are in Eastern time zones, several of them were called for Biden right after the polls closed: Alabama, North Carolina, even Virginia, where Sanders had spent a lot of time and effort and had once led the polls. In Tennessee, according to Trip Gabriel of the New York Times, 26 percent of Democratic primary voters were African American, and they broke 3 to 1 for Biden.

A key fact about the modern Democratic party is that white Democrats are increasingly liberal, while the party’s non-white base is much more politically diverse — if only because white conservatives have mostly become Republicans, while conservative African Americans and Latinos don’t feel the Republican party cares about them. It’s easy to look at overwhelming African American support for the Democratic party as overwhelming support for progressive policies, and overlook the many moderates, conservatives, and pragmatists.

One of the things that helped Biden, then, is that people complacently assumed that his black support would dry up once more voters found out about his past positions. In particular, they hoped to call attention to Biden’s authorship of a crime bill in the 1990s that has been accused of contributing to mass incarceration of African Americans, and his support for so-called “tough on crime” policies more generally. But this overlooked the fact that the crime bill had substantial black support, both in Congress and out (including the Democrats’ current Majority Whip, Jim Clyburn, whose endorsement helped Biden win South Carolina). People who considered it disqualifying probably weren’t going to vote for Biden anyway; many of Biden’s voters probably considered it an honest mistake at worst. Over and over again, we saw opponents trying to take Biden out by revealing that he’s not progressive, but they failed because actually a lot of Democrats aren’t progressive.

Many people have also noted that Biden is running as the restoration candidate who wants to turn back the clock to the good old days of 2009: not only has he based much of his campaign around the fact that he used to work for Obama, he’s repeatedly insisted that once Trump is gone, he’ll be able to cut deals with Republicans again. This, again, is probably more appealing to old Democrats than young ones, who are more likely to think that America needs some serious repair work. A lot of people are just tired of hearing about the president every single day, on every single channel and every newspaper’s front page. Biden’s lack of charisma and lack of a coherent narrative for his campaign — the things that sank his campaigns in 1988 and 2008 — may be helping him now with an important and very wide-ranging demographic: people who vote, but don’t enjoy hearing or thinking about politics all the time.

Now that this is undeniably a two-person race, with Sanders mostly appealing to young people and Biden to old people, who wins may depend on which one can successfully reach out to the other person’s core age group. Biden may start out with one obvious advantage: old people usually outvote young people, so it may be hard for Sanders to win if he doesn’t manage to get more old supporters, and fast. Sanders likely knew that he was going to have to run against an establishment candidate who would try to unify older voters into an anti-Sanders, anti-socialism coalition. He may have been preparing for that candidate to be Warren, or Harris, or Cory Booker or Amy Klobuchar or even Pete Buttigieg or Michael Bloomberg. But Biden?

RELATED: One side of this road is Republican, the other Democrat. Now it’s a battle line.