Justin Trudeau, Melania Trump and the air-kiss heard round the world

Image of the Week: This was decidedly one moment in front of the camera that Donald Trump did not own 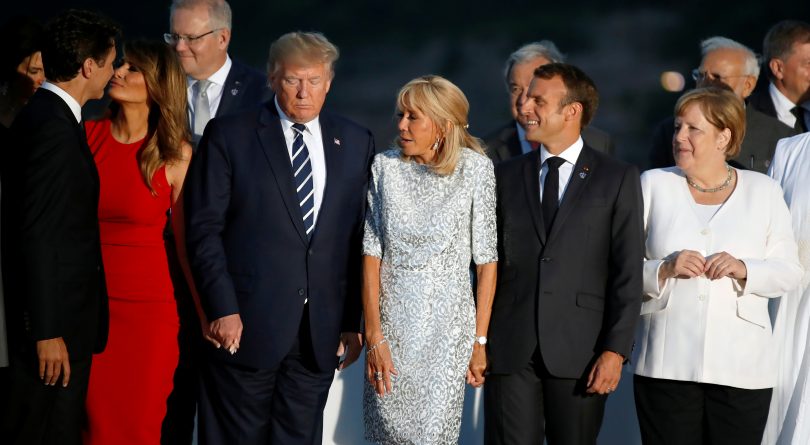 When in France: the much-discussed photo-op at the G7 summit (Christian Hartmann/Reuters)

The intimacy of the two-cheek kiss—the continental style, one may say—does not lie in the fact that it’s double the grazing contact of the more discreet one-kiss greeting. As with so much in life, the wonder is in the journey, the transition, from one side to the next. Two faces gracefully (ideally, they move gracefully, otherwise it spells social disaster) swivel past each other, affectionate eyes and lips lining up for a fractional moment before the polite gesture is complete.

This is when Reuters lensman Christian Hartmann managed to freeze history unfolding. Ostensibly, U.S. first lady Melania Trump’s destination was to the other cheek of Canada’s Prime Minister, though the deft closeness of their gesture makes one—especially the ones on social media—wonder where Melania’s mind was at this point, as world leaders arrived for a family photo at the G7 Summit in Biarritz, France. While her hand remains in Donald Trump’s clutches, the most powerful man in the world casts his eyes downward as his wife makes nice with the neighbour.

Video of the scene reveals that the U.S. president had just leaned in to let Brigitte Macron a peck his cheek while he kissed the coastal air. At 66, she’s a quarter-century older than her husband, French President Emmanuel Macron, and just a few years Donald Trump’s junior—though the thrice-married Trump has yet to remain married to somebody past the age of 50. Melania, at 49, is 24 years—a whole generation—younger than her presidential partner, and just 18 months older than Trudeau. Time is slipping past the septuagenarian Trump, who is more than halfway through his presidential term. A man whose fame was built as much on owning the spectacle as on the concrete foundations of his self-branded towers lost control of this moment, like so many other ones over the past couple years.