U.N. court convicted Radovan Karadzic of genocide and nine other charges — sentencing him to 40 years in prison 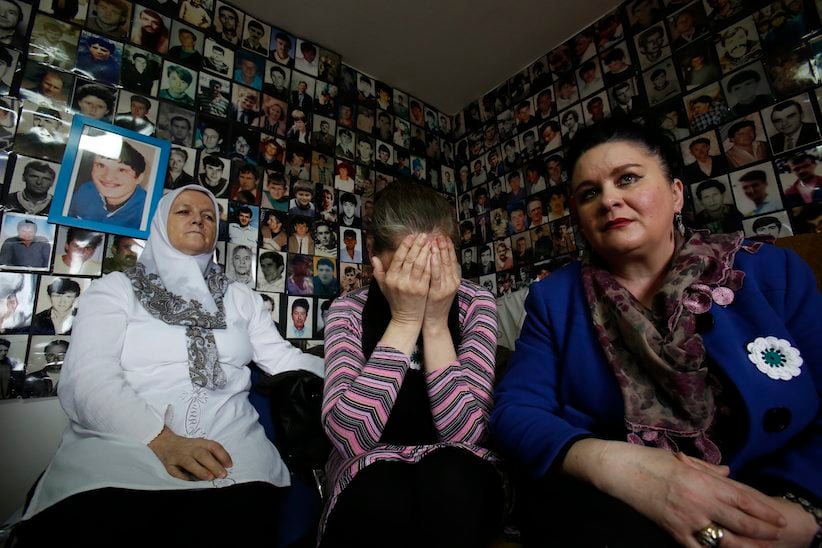 Bosnian Muslim woman who lost their family members in Srebrenica Fatima Mujic, Vasvija Kadic and Mirsada Kahriman, from left to right, react as they watch a TV broadcast of the sentencing of Radovan Karadzic. (Amel Emric, AP)

THE HAGUE, Netherlands — A U.N. court convicted former Bosnian Serb leader Radovan Karadzic of genocide and nine other charges Thursday and sentenced him to 40 years in prison for orchestrating Serb atrocities throughout Bosnia’s 1992-95 war that left 100,000 people dead.

As he sat down after hearing his sentence, Karadzic slumped slightly in his chair, but showed little emotion.

The U.N. court found Karadzic guilty of genocide in the 1995 Srebrenica massacre in which 8,000 Muslim men and boys were slaughtered in Europe’s worst mass murder since the Holocaust.

Presiding Judge O-Gon Kwon said Karadzic was the only person in the Bosnian Serb leadership with the power to halt the genocide.

In a carefully planned operation, Serb forces transported Muslim men to sites around the Srebrenica enclave in eastern Bosnia and gunned them down before dumping their bodies into mass graves.

Karadzic was also held criminally responsible for murder, attacking civilians and terror for overseeing the deadly 44-month siege of the Bosnian capital, Sarajevo, during the war and for taking hostage U.N. peacekeepers.

However, the court acquitted Karadzic in a second genocide charge, for a campaign to drive Bosnian Muslims and Croats out of villages claimed by Serb forces.

Karadzic had faced a total of 11 charges and a maximum life sentence, but was given 40 years imprisonment. Karadzic can appeal the ruling.

Prosecutors held Karadzic responsible as a political leader and commander-in-chief of Serb forces in Bosnia, which are blamed for the worst atrocities of the war. The 70-year-old Karadzic had insisted he was innocent and says his wartime actions were intended to protect Serbs.

The trial is hugely significant for the U.N. tribunal and the development of international law. Karadzic is the most senior Bosnian Serb leader to face prosecution at the court housed in a former insurance company headquarters in The Hague.

Karadzic’s conviction will most likely strengthen international jurisprudence on the criminal responsibility of political leaders for atrocities committed by forces under their control. 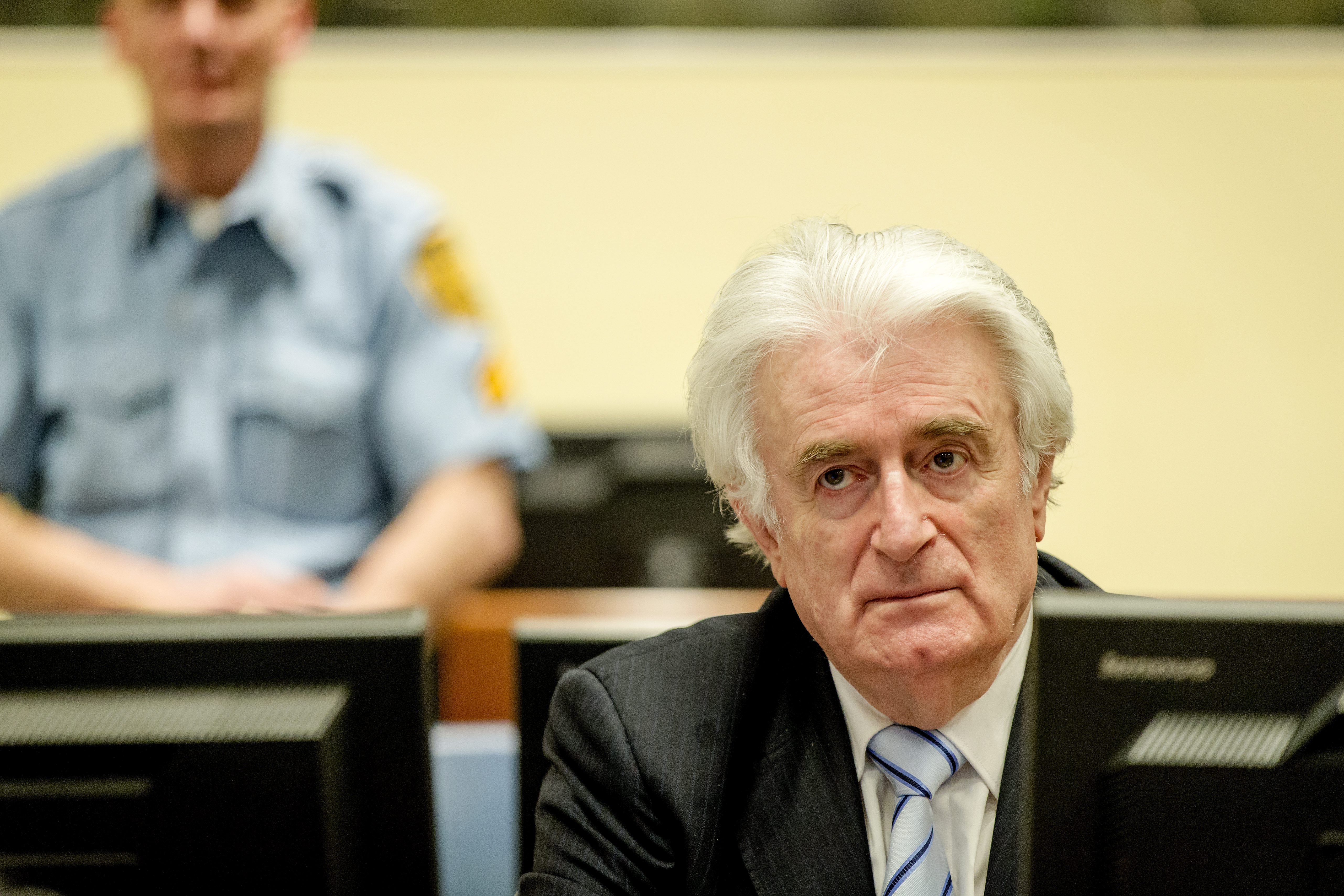 Radovan Karadzic in the courtroom for the reading of his verdict in The Hague. (Robin van Lonkhuijsen, Pool via AP)

“Victims and their families have waited for over two decades to see Karadzic’s day of reckoning,” Param-Preet Singh, senior international justice counsel at Human Rights Watch, said in a statement.

“The Karadzic verdict sends a powerful signal that those who order atrocities cannot simply wait out justice,” Singh said.

In Bosnia, which has remained divided since the war, posters displaying Karadzic’s photo and saying “We are all Radovan” were plastered on walls in several towns in the Serb part of the country. Dozens of people gathered in a park in the Bosnian Serb town of Doboj to offer support to Karadzic.

In Sarajevo, Amra Misic, 49, said “I took a day off to watch the verdict as I was waiting for this for 20 years. I wish him a long life,” she said, referring to the fact that Karadzic is 70 years old and sentenced to 40 years.

Serbian President Slobodan Milosevic, accused of fomenting deadly conflicts across the Balkans as Yugoslavia crumbled in the 1990s, died in his cell in The Hague in 2006 before judges could deliver verdicts in his trial.

Karadzic’s trial was one of the final acts at the Yugoslav war crimes tribunal. The court, set up in 1993, indicted 161 suspects. Of them, 80 were convicted and sentenced, 18 acquitted, 13 sent back to local courts and 36 had the indictments withdrawn or died.

Apart from Karadzic, three suspects remain on trial, including his military chief, Gen. Ratko Mladic, and Serb ultranationalist Vojislav Seselj. Eight cases are being appealed and two defendants are to face retrials. The judgment in Seselj’s case is scheduled for next Thursday.

Karadzic was indicted along with Mladic in 1995, but evaded arrest until he was captured in Belgrade, Serbia, in 2008. At the time, he was posing as a New Age healer, Dr. Dragan Dabic, and was disguised by a thick beard and shaggy hair.

More than 20 years after the guns fell silent in Bosnia, Karadzic is still considered a hero in Serb-controlled parts of the divided country.

Speaking at the opening, Dodik called the trial “humiliating” and said those who fail to understand why Karadzic is hailed this way are “shallow-minded.” His words were followed by resounding applause.