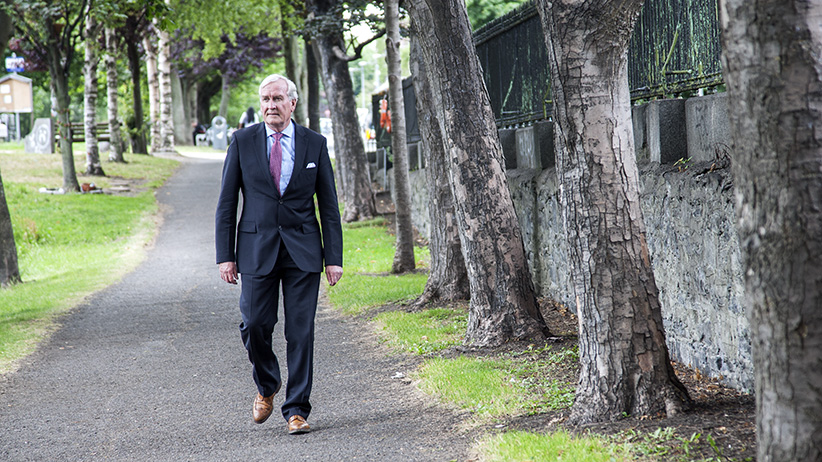 It started with neighbourhood folklore, with half-remembered stories about Patrick Pearse himself, the martyred poet-revolutionary of the 1916 Easter Rising in Ireland. Could it be true that Glanmire House, the official residence of Canada’s ambassador to Ireland in Dublin, was once home to the eccentric Irish nationalist who brought the British Empire to its knees all those years ago?

“There had always been talk,” says ambassador Kevin Vickers, the career RCMP officer who went on to become the House of Commons’s most famous sergeant-at-arms. “I’d kept hearing that Patrick Pearse had lived here, so I put the old Mountie hat on, and I went to the embassy’s lawyer, and I said I wanted to see every file on the residence.”

Vickers got to the bottom of the story all right, and just as it is with the legacy of the Easter Rising of 1916 being nationally celebrated and officially re-evaluated and wondered about so joyfully and mournfully in this centennial year, what Vickers discovered doesn’t quite fit with the legends that had whirled around the stately home on Oakley Road, in Dublin’s posh Ranelagh district. It wasn’t especially glamorous after all. But it was strangely moving, nonetheless.

Vickers, 60, grew up in the proudly Irish Catholic communities of New Brunswick’s Miramichi River, where the 1916 Rising was the stuff of bedtime stories. The Vickers family emigrated to the Miramichi from Arklow, County Wicklow, in the 1820s, and it could just as well have been last year. Patrick Pearse — who set the events of 1916 in motion when he read the Proclamation of the Irish Republic from the steps of the General Post Office in Dublin — is not exactly an unfamiliar name to the Miramichi Irish.

As a contribution to Ireland’s centenary observances the Canadian embassy earlier this year co-sponsored a performance of Odhrán Ó Casaide’s Requiem 1916, an elaborate meditation of the insurrection, in song and story, in English and in Irish. Recorded March 4 at the Church of the Holy Name in Ranelagh and broadcast across Ireland on TG4 — the Irish-language channel — Vickers took on a performing role, reading Pearse’s last letter to his mother, written on the eve of his execution.

It was everything Vickers could do to get through it without his voice cracking.

St. Enda’s, the radical school Pearse had founded in 1908, was located at Cullenswood House, just next door to Glanmire House. But by the time of the 1916 Rising, St. Enda’s had moved to more spacious accommodations at Rathfarnham, south of the city. What was Pearse’s connection with Glanmire House?

“At the lawyer’s, they gave me a room and five cardboard boxes and a pot of coffee,” Vickers explained. “And what did I find in those cardboard boxes? Two beautifully handwritten, in calligraphy, original leases between the owner of this house, guy by the name of Armstrong, and signed with a wax seal, original signature, Patrick Henry Pearse.”

Pearse had leased the grounds around Glanmire House and put them to use as playing fields for his students (Glanmire House itself also appears to have come into the possession of Pearse’s mother, Margaret, no later than 1918). Vickers arranged to have a framed laser copy of the 1910 surrender of the lease, with Pearse’s signature, placed prominently in an entrance hallway, with a view of the grounds. “I’ve had people come in here and start crying when they see it,” he said.

A great deal of raw emotion does tend to be conjured in Ireland whenever the subject of 1916 comes up, but this year’s centennial commemorations have let out a panoply of complicated and nuanced tellings of history that would have been barely tolerable only a few years ago.

The austere Catholicism that stunted Ireland’s “official” culture has given way almost entirely, not least because of the abuse scandals that have rocked the church in recent years. The sectarian warfare that pitted loyalists against republicans in Ulster until the 1998 Good Friday agreement is only a dim memory: Ireland is the most “youthful” country in the European Union, with four in 10 citizens under the age of 30. Last year, Ireland became the first country in the world to legalize same-sex marriage by popular vote.

Five years ago, Queen Elizabeth II became the first British monarch to visit Ireland since King George V toured in 1911, and she was warmly received everywhere she went. Two years ago, President Michael Higgins became the first Irish president to make a state visit to the United Kingdom, and was as happily received.

At the March 4 performance of Requiem 1916, the British ambassador, Dominick Chilcott, was in the pews. He was given a standing ovation, just for being there. “I think that gives you a good sense of how things are and where people’s heads are at,” Vickers said.

The dreary old rebel songs just don’t cut it anymore, and there has been a consensus across Ireland’s political mainstream that the 1916 commemorations should acknowledge everyone’s wounds, admit that there was death and sacrifice on all sides and that Ireland should mourn all the dead equally. This brings us to Thursday, May 26, at a solemn graveside ceremony at Grangegorman Cemetery in Dublin, arranged by the Irish government to honour the scores of men in British uniforms who were killed in the Easter Rising.

When a dissident republican protester appeared out of nowhere shouting about the “insult” the ceremony was giving to 1916’s dead freedom fighters, a startled Vickers, who stands six feet five, tackled the man and frogmarched him away from the dignitaries and Irish cabinet ministers in attendance. This caused an unholy row back in Canada, though notably less so in Ireland.

It was only 18 months earlier that Vickers made international headlines for his coolness under fire in the House of Commons, when he retrieved a handgun from his desk drawer and helped bring down Michael Zehaf-Bibeau, a jihad-inspired loner who had only moments earlier murdered Cpl. Nathan Cirillo at the National War Memorial. “It was the loneliest moment of my life,” Vickers would later recall.

Vickers wouldn’t talk about what happened at Grangegorman — the public disturbance charges against Brian Murphy, the protester Vickers hauled off by the scruff of his neck, are still before the courts. But Vickers did gently raise one minor objection to the way the Canadian media handled the event. It was widely reported as though the incident occurred at a ceremony honouring the British side in the 1916 Rising.

As if things were as simple as the lyrics of a pub ballad.

The Glasnevin Trust has established that 485 people died during the week of the 1916 Easter Rising, or were executed by the British in the aftermath, as was Patrick Pearse. Just over half the dead were civilians. Rebel deaths account for 16 per cent of the total. The “British” dead account for about a third of the total mortalities — but a third of these were Irishmen. They were members of the Dublin Metropolitan Police, the Royal Irish Constabulary, the Royal Irish Regiment, the Royal Dublin Fusiliers and the Royal Irish Rifles. There was a Canadian, too. Neville Fryday was with Toronto’s 75th battalion. An Irish-Canadian, Fryday was visiting an aunt in Dublin, on his way to the First World War front in France, when the Easter Rising began.

“There were so very many Irish boys in British uniforms that day,” Vickers said, “so to tag the thing [at Grangegorman Cemetery] as it was portrayed, as some sort of thing just for British soldiers, that was a bit off.” A minor objection, then, but a fair one.

Vickers wasn’t one of them.