Immigrants from countries the president doesn't like are much higher skilled, on average, than Canadians who have been here for generations 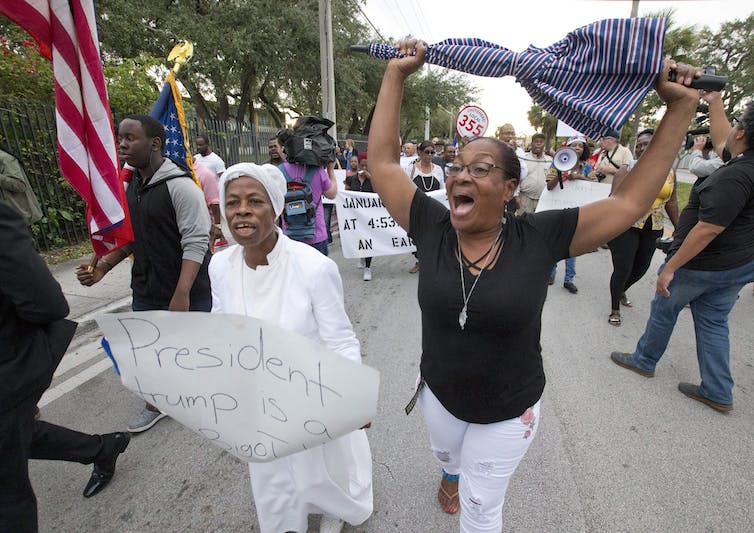 Haitian-Americans protest Donald Trump’s “shithole countries” remarks as they march in Miami on Jan. 12 to commemorate the eighth anniversary of the Haitian earthquake. (AP Photo/Wilfredo Lee)

Arvind Magesan is associate professor of economics at University of Calgary.

Defenders of Donald Trump say his “shithole countries” remark regarding people from Africa, Haiti and other nations was just Trump being Trump — the president may have used salty language, but it’s really just his way of saying the United States should have a merit-based immigration system like Canada’s.

A generous interpretation of Trump’s comments are that immigrants from certain so-called “shithole” countries—African nations, Haiti and El Salvador—are not typically highly skilled or economically self-reliant, and if admitted would need to depend on the state.

In fact, Trump apologists—and the president himself—might be surprised by what the economic data says about immigrants who come to Canada from the “shithole” countries.

John Fredericks, who was Trump’s campaign chair in Virginia, told CNN that immigrants from those countries “come into the United States and they do nothing to increase the prosperity of the American worker. They lower wages or go on welfare and extend our entitlement system …. Australia and Canada have a merit-based system. You know why they do that? Because they want to bring people into their country who are going to enhance the prosperity of their citizens.”

Trump himself tweeted a similar sentiment.

Canada offers an opportunity to take a look at this hypothesis because our points-based immigration system screens immigrants on merit to a large degree. So when we screen immigrants on merit, who do we let in and how do they do?

The first thing to note is that Canada admits many immigrants from the “shithole” countries.

Data from the 2016 census shows over the last five years there have been more than twice as many immigrants from Central America and the Caribbean (which includes Haiti and El Salvador) than there were from the U.S. There were also more immigrants from the African continent than from the U.S. and North and Western Europe combined.

Clearly a merit-based system does not mean we only admit people from the “Norways” of the world—and in fact, the census data shows only 230 people immigrated from Norway over the five-year period.

The next question is how do these immigrants fare?

To look more closely at this, I used individual 2011 Canadian census data (detailed 2016 data isn’t yet available) to look at three groups: Canadians whose families have been here for three generations or longer; immigrants from the “Norways” of the world (Northern and Western Europe, including the U.K., Germany, and Scandinavia) and immigrants from Trump’s “shithole” countries (Central America, the Caribbean, Africa).

I looked at the skill levels of the different groups, as measured by their education level, and then at their economic self-sufficiency: employment, wages and how much they receive in transfers and employment benefits from the government.

Forty per cent of Canadians who have been here for three generations or longer have at least some post-secondary education, and 18 per cent have a bachelor’s degree. By comparison, a much larger percentage of immigrants of either type (53 per cent) have some post-secondary, and 27 per cent of immigrants from “Shitholes” have a bachelor’s degree. So by this standard measure of skill, immigrants from “Shitholes” have a slightly higher skill level than do immigrants from “Norways,” and a much higher skill level on average than Canadians who have been here for generations.

It is commonly argued that immigrants, particularly from poorer countries, are “expensive” because they receive a disproportionate amount of government transfers and unemployment benefits. The truth is, though Canadians who have been here for generations are more likely to be employed and earn (slightly) more on average than either immigrant group, immigrants from the “Shitholes” are far more likely to be employed than immigrants from the “Norways.”

Perhaps more interestingly, immigrants from the “Shitholes” receive fewer transfer payments from all levels of government than “Norwegian” immigrants.

Finally, looking at employment insurance benefits alone, Canadians who have been here for generations receive more than either group.

What can we say about these numbers?

Firstly, immigrants from the “Shithole” countries are not typically low skill and in principle, should not be putting pressure on employment or wages of blue-collar workers in Canada. Then why is this such a common perception?

It’s likely due to a different issue, that high-skilled immigrants are unable to get high-skill jobs for other reasons (discrimination in the labour market, an inability of employers to recognize or evaluate credentials, or even language issues) and then do end up competing with lower-skilled Canadian workers.

Secondly, immigrants from the “Shithole” countries are generally no more dependent on the state than other Canadians. Though they earn less than those from the “Norway” countries, they are more likely to be employed and they receive less total government transfer payments.

As an economist, it’s important to state that we shouldn’t interpret these relationships between country of origin and economic outcomes as causal—workers from different countries are different for many reasons (demographics like age, as well as occupation, etc).

But that doesn’t at all affect the main point—Trump’s perception of the differences in the average immigrant from countries like Haiti and Norway is at the very least a consequence ignorance, or as many have suggested, racism.

One thing that can’t be rationalized by the raw numbers here: The course of history and the current plight of many of the “shithole” countries is at least partly a consequence of U.S. foreign policies, that the position of relative economic superiority of the U.S. is partly an outcome of these policies, and that this above all might imply a moral obligation on the part of the U.S. when deciding who to let in and from where.