Mexicans get ready to take on Donald Trump

Fearful of Trump and his ongoing attacks, Mexico’s political class struggles with how to fight back 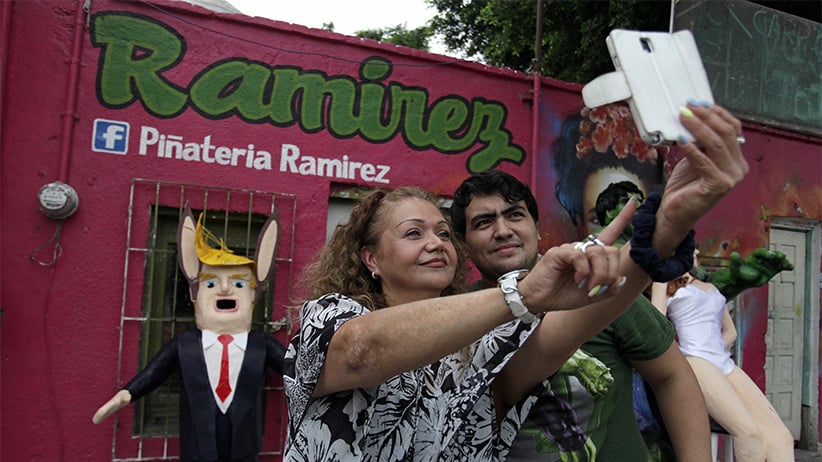 Mexican artisan Dalton Ramirez and a customer pose for a selfie in front of a pinata depicting U.S. Republican presidential candidate Donald Trump outside his workshop in Reynosa, Mexico, June 23, 2015. (Daniel Becerril/Reuters)

Dalton Javier Ávalos Ramírez makes mischief in the form of piñatas resembling prominent personalities. He’s made piñatas of presidents, including the increasingly unpopular Enrique Peña Nieto; criminals such as cartel kingpin Joaquín “El Chapo” Guzmán; and sports stars, like the Dutch soccer player whose dive at the last World Cup led to an early exit for Mexico. He even fashioned a Fifty Shades of Grey piñata, earning a censorship visit from municipal officials. His most mischievous creation, however, made worldwide headlines: Donald Trump, complete with red tie, trademark hairdo and a big mouth.

His motives for mocking the property mogul-turned-Republican frontrunner are clear to anyone in Mexico—and especially obvious to those like Ávalos Ramírez, who lives and works a stone’s throw from the Texas border, where Trump wants to build a “big, beautiful wall.” “When he declared his candidacy, he said these stupid things about Mexicans,” he says of his inspiration for the Trump piñata, displayed during a recent visit on the sidewalk outside his store in the border city of Reynosa. “It was a way of answering him, of giving people upset with what he said a chance to take a whack at him.”

Trump has angered millions of Mexicans by calling migrants “rapists” and robbers and promising to build a wall paid for with remittances seized from Mexicans working in the United States. He also last week attacked the North American Free Trade Agreement (NAFTA,) a pillar of Mexican economic policy for the past quarter-century. Many Mexicans have responded with humour, making fun of Trump on social media and bashing piñatas of him at birthday parties. During the annual “Burning of Judas” over Easter weekend, effigies of Trump were stuffed with fireworks and exploded in town squares—an indignity normally reserved for Mexico’s most reviled figures. Some politicians have taken to attacking Trump to score cheap points—and turn talk away from the country’s record on human rights and a botched investigation into the forced abduction of 43 teacher trainees in September 2014. But for many políticos, confronting Trump is proving harder than whacking a piñata.

The image-conscious Peña Nieto initially stayed mum on Trump, making only vague pronouncements on populism and its dangers—interpreted at home as attacks on left-wing politician Andrés Manuel López Obrador, the two-time presidential runner-up and current poll leader for the 2018 election. The president, not known for straying from scripts and protocol, eventually compared Trump’s rhetoric to the rise of fascist leaders in Italy and Germany prior to the Second World War. Ex-president Vicente Fox has stood out as a more outspoken critic, attacking Trump via Twitter. He sent out a series of mushy messages while celebrating his wife’s birthday, assailing Trump and asking, “What do you know about love? Or you just know about hating. How sad!” (Mexicans responded with snark and allegations of drunk tweeting.) Fox famously ended one-party rule in 2000 with a campaign that mocked political opponents, used salty language and a simple slogan, “¡Ya! (“Now,” or, “Enough” in Spanish.) It attracted the masses, but drew derision from the intellectual classes and many in the media. “He was our very own Trump,” says Federico Estévez, a political science professor at the Autonomous Technological Institute of Mexico.

But such characters are uncommon in Mexico, as the political party bosses control ballot access, rig the rules against independents and seldom hold primaries, making it all but impossible for upstarts like Trump to gain traction—and especially difficult for the Mexican political class to comprehend “what this craziness is about up north,” Estévez says. “American presidential politics [is] too bottom-up. We’ve never tasted such a thing.”

Trump’s rise is causing enough concern that the Mexican Senate recently held a seminar, “Myths and realities of the Donald Trump candidacy.” It produced plenty of analysis and also some irony—showing, for instance, that the governing Institutional Revolution Party (PRI) and Trump draw similar demographics in their respective countries: mostly male, lower income and poorly educated. The seminar also found Mexicans are increasingly abandoning anti-Americanism, even as negative attitudes toward Mexico and nativism surges in the United States. Some 44 per cent of Mexicans in 2014 said they “trust” the United States, up from 20 per cent in 2004, according to a survey by the Foreign Relations Secretariat and Centre for Research and Teachings in Economics (CIDE.)

The Senate seminar, however, offered no answers. Some Mexicans suggest sticking with silence. Trump “turns these things in his favour,” says Gabriel Guerra Castellanos, founder of a prominent public relations firm and former Mexican consul in Toronto. “If he sees an active, dynamic campaign orchestrated against him by the Mexican political class, he will use it to say, ‘We’re touching their interests. This is the proof that they’re taking advantage of us.’”

For all the talk of migrants, though, most analysts see trade at the heart of the Mexican elite’s preoccupation with Trump. More than US$1 million in merchandise moves every minute across the border and manufacturing, especially in the automotive sector, is expanding rapidly. “When Trump says, ‘wall,’ they think, ‘business and trade,’ ” says Carlos Bravo Regidor, a professor of public affairs at CIDE.

With NAFTA, the country and its elites bet big on closer ties with the United States, only to find a backlash 20 years later in the form of anti-NAFTA attitudes and Trump’s attacks. “We hitched our wagon to these guys 25 years ago and we don’t want it unhitched,” Estévez says. “Trump is promising to instead send us down some side rail line to end up God knows where, but not the station.”

Estévez sees another reason the elites worry about the border: “It closes the escape valve,” which in past years allowed Mexicans unhappy with their economic prospects to pursue el sueño americano, the American dream. Politicians have been happy to see potential opposition supporters depart for America, easing the urgency to clean up corruption or provide opportunities in impoverished pockets of Mexico.

Organizations working with the families of Mexicans whose migrant relatives reside in the United States say the escape valve has already all but closed. Smugglers’ fees have skyrocketed and the migrant smuggling business has been taken over by organized crime. The border also has become increasingly impossible to cross without some sort of paid assistance. Smugglers, known as polleros, control the cross-border flow of people and are finding ways to sneak migrants through, even with increased enforcement, barriers and cameras, says Ellen Calmus, director of the Corner Institute, which supports migrant families in Malinalco, a municipality southwest of Mexico City.

Some in Mexico also can’t miss the hypocrisy of taking issue with Trump over the treatment of Mexicans in the United States, while doing little to discourage emigration in the first place. “They show concern for [poor Mexicans] when they’re living in the United States,” but not at home, says Marcial García, manager of a piñata store near the U.S. Embassy in Mexico City, who sees a steady demand for Trump piñatas from foreigners.

Ávalos Ramírez sells plenty of Trump piñatas to foreigners braving the border, too. “I could sell all of the [Trump] piñatas I make,” he says. He suspects U.S. voters will lose their enthusiasm for Trump—or at least he’s hoping. “I think Americans are very intelligent people. They’re not going to support this person for president,” Ávalos Ramírez says. “I saw Trump arrive and thought, ‘What the heck happened?’ ”