Indonesian President Joko Widodo thanked 'many parties' who co-operated to secure the release of the hostages. 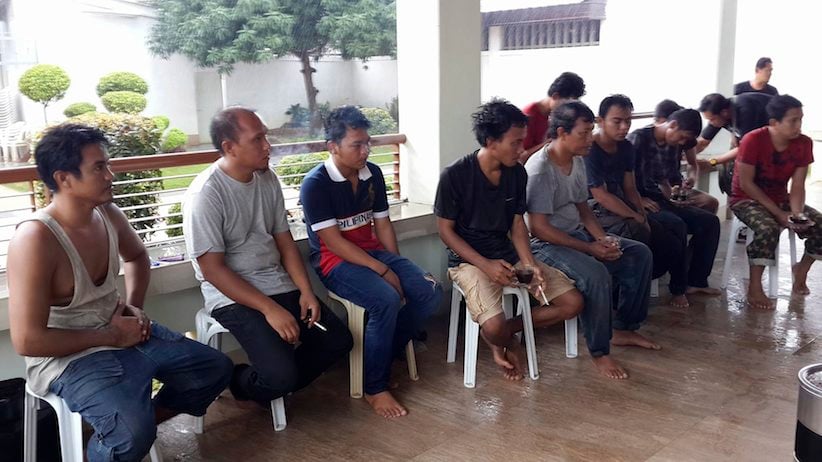 Freed Indonesian tugboat crewmen sit inside a house in Jolo, Sulu province, southern Philippines on Sunday May 1, 2016.  (Office of the Sulu Governor via AP)

MANILA, Philippines — Abu Sayyaf militants have freed 10 Indonesian crewmen who were seized at sea in March in the first of three attacks on tugboats that have sparked a regional maritime security alarm, officials said Sunday.

The Indonesians appeared to be in good health when they were dropped off Sunday afternoon in front of the house of Sulu province’s governor in the town of Jolo, said the town’s police chief, Junpikar Sitin. The 10 men were then brought to a Philippine military camp and arrangements were underway to turn them over to Indonesian officials.

A photo seen by The Associated Press shows the sunburned men in fresh shirts eating rice and chicken with Sulu’s governor on a veranda beside a Japanese-style garden in his house. In another photo, some of the men are puffing cigarettes and enjoying coffee while resting on chairs.

Jolo’s mayor, Hussin Amin, welcomed the release of the Indonesians, but said he did not know whether a ransom had been paid.

“If this big release came in exchange for money, those who paid are supporting the Abu Sayyaf,” he said. “This money will be used to buy more firearms and will be utilized as mobilization funds by these criminals.”

Indonesian President Joko “Jokowi” Widodo thanked the Philippines and the “many parties” in Indonesia who co-operated to secure the release of the hostages.

At a televised news conference at a presidential palace in the West Java province city of Bogor, Jokowi said the government was continuing to work for the release of four other Indonesians who were taken hostage by suspected Abu Sayyaf militants in a separate incident last month.

A Philippine army officer who has been helping to deal with kidnappings by the Abu Sayyaf said a rebel commander from the Moro National Liberation Front, which has signed a peace deal with the Philippine government, helped negotiate with the Abu Sayyaf for the release of the 10 Indonesians.

The hostages were escorted down from a jungle encampment in Sulu and left outside the home of the governor, Abdusakur Tan II, the army officer said by phone on condition of anonymity because he was not authorized to talk to reporters.

After the Indonesians were kidnapped at sea in March, suspected Abu Sayyaf militants separately attacked two other tugboats and snatched four Indonesians and four Malaysians who are believed to have also been brought by speedboats to the militants’ jungle bases in Sulu, a predominantly Muslim province about 950 kilometres (590 miles) south of Manila.

Alarmed by the successive attacks, Indonesia’s Jokowi said last week that his government would host talks with Malaysia and the Philippines to boost security in waters bordering the three countries.

He said the meeting of foreign ministers and military chiefs would discuss joint patrols to protect shipping. A Malaysian diplomat said one proposal is to harness satellite technology to keep an eye on the vast stretch of water and allow faster reaction by naval and maritime police forces.

When asked whether ransom was paid for the Indonesians’ release, the army officer said he was unaware of any payment, but noted that the Abu Sayyaf traditionally has released captives only after money has been paid.

Abu Sayyaf gunmen beheaded a Canadian hostage in Sulu last Monday after they failed to receive a huge ransom by a deadline they had set.

Philippine troops launched an offensive against the Abu Sayyaf after the beheading, and Canadian Prime Minister Justin Trudeau has vowed to help the Philippines bring the killers to justice.

More than a dozen foreign and local hostages remain in the hands of the Abu Sayyaf, including another Canadian and a Norwegian who were kidnapped last September, and a Dutch bird watcher who was kidnapped more than three years ago.

An unusual surge in kidnappings, including the tugboat attacks, along with recent beheadings by the Abu Sayyaf and a few small extremist groups that have emerged in the southern Philippines may be an effort by the militants to show off their capability and brutality and associate themselves with the Islamic State group in the Middle East, terrorism analysts say.

The Abu Sayyaf emerged as an extremist offshoot of the decades-long Muslim secessionist conflict in the southern Philippines and has carved its name in blood, carrying out mass kidnappings, beheadings and bombings.

The brutal group, which is estimated to have about 400 armed fighters split into a few factions, has been blacklisted by the United States and the Philippines as a terrorist organization.