Reported missing at sea for 66 days, man is found 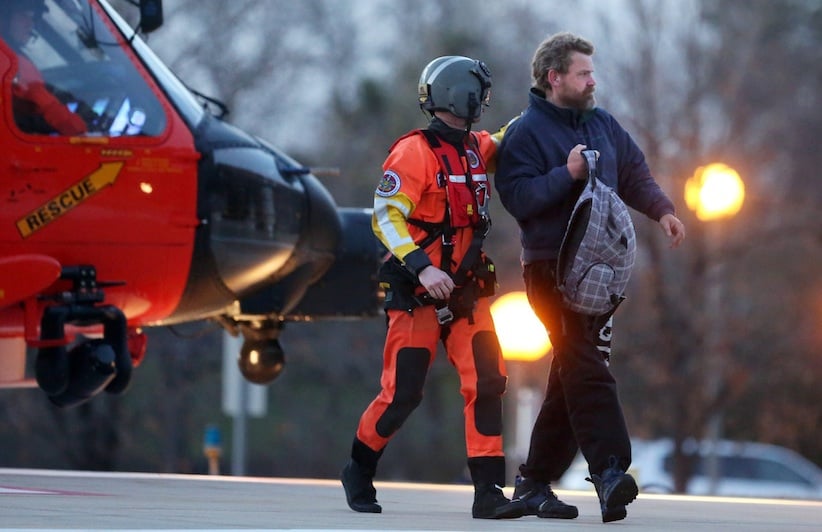 PORTSMOUTH, Va. — In good condition with no signs of sunburn, dehydration or other ailments, a man reported missing at sea two months ago was rescued on the overturned hull of his sailboat off North Carolina’s coast and walked away from a hospital just hours later.

Louis Jordan, 37, said Friday he got by rationing his water and energy and praying for help.

The crew of a German-flagged container ship found Jordan on his single-masted 35-foot (11-meter) boat on Thursday afternoon.

Neither he nor the Coast Guard said exactly when Jordan’s vessel capsized. Jordan managed to catch and eat fish during his ordeal, according to the Coast Guard, and despite reports of a shoulder injury and dehydration, he arrived at a hospital in good condition and refused treatment, a facility spokesman said.

A four-man Coast Guard helicopter crew hoisted Jordan off the German vessel. In interviews Friday at Coast Guard headquarters in Portsmouth, they said they did not see Jordan’s boat and did not know any details about his time at sea. By the time they picked him up — about 5 p.m. Thursday — Jordan had been on the German vessel for a few hours and had been able to take a shower and speak to his family, the guardsmen said.

“He walked over to me as soon as I landed on deck and had a small smile on his face,” said Petty Officer 3rd Class Kyle McCollum, who had the first contact with Jordan. “My initial impression of him was he was in pretty good health. … We were expecting worse with blisters and severe sunburn and dehydration.”

“He was in a fairly good condition for a guy that you would normally expect to see after 60-plus days offshore,” added Lt. Jack Shadwick, the helicopter’s co-pilot.

Jordan said he initially did not believe the container ship was real when he saw it. He said the ship’s crew did not see him until he began waving his arms.

“I waved my hands real slowly, and that’s the signal ‘I’m in distress. Help me,”’ he told WAVY. “I blew my whistles. I had three whistles. They never heard them. I turned my American flag upside down and put that up. That says, ‘Rescue me.'”

Jordan had been living on his 1950s-era boat at a marina in South Carolina, until January, when he told his family he was going into open water to sail and fish, said his mother, Norma Davis. He set out Jan. 23, Coast Guard officials said, and hadn’t been heard from since.

Jordan told WAVY that he was travelling north when his boat hit bad weather. He said he saw a wave crash into his window, and the boat eventually filled with water.

He said he rationed his water to about a pint a day, but “for such a long a time I was so thirsty.”

Jordan said that at one point he was flying through the air, and he thinks he broke his shoulder.

McCollum, of the Coast Guard helicopter crew, said Jordan had slight bruising on his right clavicle when he was found, but it did not appear serious: “He was moving that arm so fluidly, without any skip and there wasn’t any sign of pain in his face as he was moving.”

On Jan. 29, the Coast Guard in Miami was notified by his father, Frank Jordan, that he hadn’t seen or heard from his son in a week, agency spokeswoman Marilyn Fajardo said.

A search began Feb. 8, but Fajardo said the Coast Guard abandoned it after 10 days.