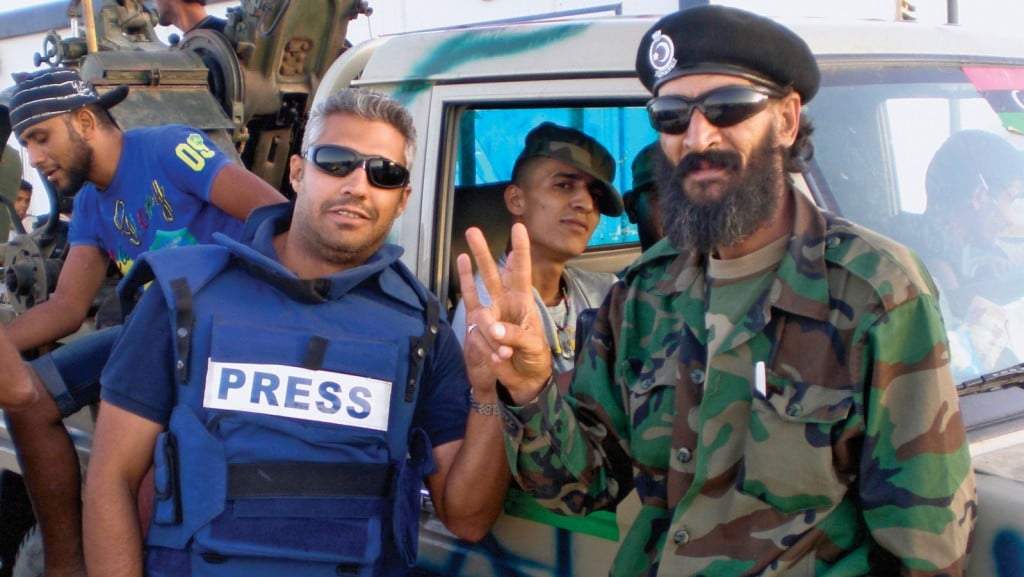 Mohamed Fahmy (left), the Egyptian-Canadian journalist who was released on bail. (THE CANADIAN PRESS/HANDOUT)

CAIRO _ Canadian journalist Mohamed Fahmy was released on bail from a Cairo prison early Friday, marking the first time he has been able to go home to his family in more than a year.

The development moved the 40-year-old one step closer to freedom and prompted an expression of joy from his family.

“My brother bMFFahmy11 has been released from the police station!! I am going on vacation before they arrest him again! Thank-you all!” his brother Adel Fahmy tweeted.

Photos on Facebook and video aired by Al Jazeera English, which employed the two men, showed Mohamed hugging and playing with his children — one of whom was born during his detention — and wearing clothes with the tag, “Free Press.”

“I will continue fighting for the freedom of expression, and I will not back off,” he said in the video.

Both Fahmy and Mohamed were ordered released on bail by an Egyptian court on Thursday, about an hour into the start of their retrial on terror-related charges their families have called ridiculous.

The surprise development prompted expressions of jubilation from Fahmy’s family, although the journalist’s legal battles continue.

The retrial was put over to Feb. 23, and until then, lawyers said Fahmy and Mohammed will have to report to a local police station every day.

Fahmy, Mohamed and a third colleague — Australian Peter Greste — were arrested while working for Al Jazeera English in December 2013.

They were convicted last summer after a trial that was internationally denounced as a sham. A retrial was ordered after a successful appeal in early January.

Greste, however, was abruptly freed at the beginning of the month before a date for the retrial was announced last Sunday.

He left Egypt under a new law that lets the country’s president deport foreigners convicted or accused of crimes, and Fahmy had hoped to follow, giving up his dual Egyptian citizenship on the advice of local authorities in order for the law to apply to him.

“Mr. Fahmy is eligible for transfer under this same law — and the retrial process … does not change that,” she said in a statement. “There is no impediment to his immediate transfer to Canada and Prime Minister Harper should personally intervene to ensure that the promise that was made by the Egyptian government to his government, and to its citizen, is now honoured.”

When asked about Canada’s efforts on Fahmy’s case, Prime Minister Stephen Harper said Thursday that his government had “been in contact with Egyptian authorities at all levels, including my level.”

“We will continue to press for his release. And we do remain optimistic that this case will be resolved,” Harper said.

Fahmy’s family, while welcoming news of his bail, emphasized that Canada still needed to push to bring its citizen home.

“We still want full exoneration, if not, then deportation, and we still want Canada to pressure hard,” Fahmy’s brother said.

Fahmy was the only defendant who was ordered to pay an amount equivalent to about $41,000 for his release on bail, as he was considered a flight risk.