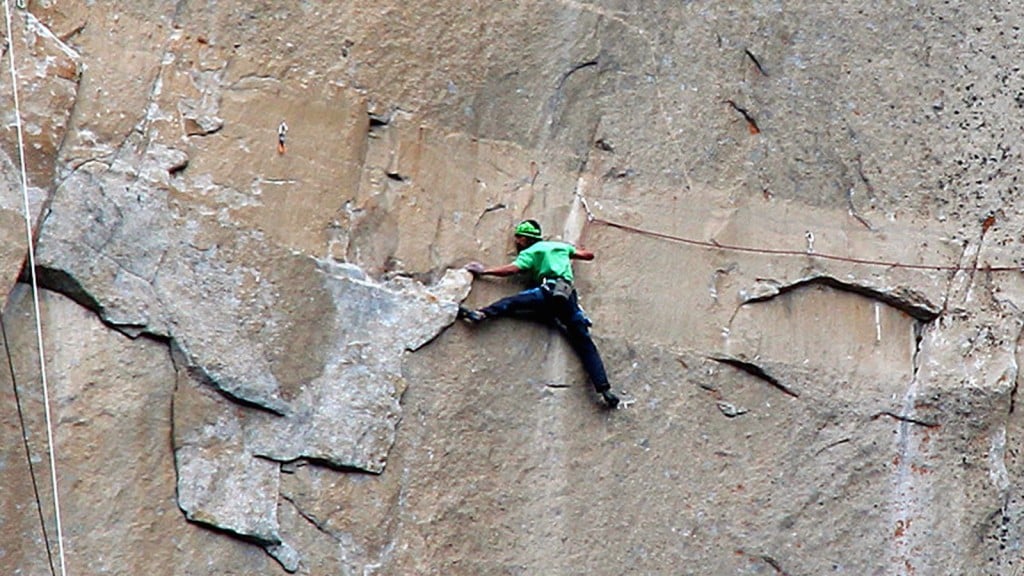 Update and a spoiler alert, 6:24 p.m.: Dreams do so come true. Just a few minutes ago, two Americans completed a history-making ascent. Earlier today, Nick Taylor-Vaisey profiled the climbers and their mission:

Think about everything that’s preoccupied you for the past three weeks, and all the to-do lists you were probably too busy to put on paper. Now, consider the case of Tommy Caldwell and Kevin Jorgeson. They’ve thought about just one thing since Dec. 27: successfully climbing the world’s most challenging rock face, the Dawn Wall of El Capitan, aided only by an uncommon strength of will and their own bloodied hands. Today, they might live out their dreams.

Caldwell, 36, and Jorgeson, 30, spent several years plotting the headline-grabbing, 914-m free climb in the middle of California’s Yosemite National Park. Free climbs involve no equipment to nudge climbers forward—only ropes for safety, in case of a fall. Another of the world’s most capable climbers, 29-year-old Alex Honnold, admitted the feat would outdo anything he’s accomplished. Scaling the Dawn Wall is, Honnold says, “almost not possible.”

Indeed, the southeastern face of El Capitan is bathed by light at sunrise and treacherous for all manner of reasons: unrelenting heat that often rules out climbing at midday; smooth rockface that offers few holds to free climbers who desperately need something to grab; and even a point at which the pair was forced to make a horizontal leap. No one has ever free-climbed the Dawn Wall.

Caldwell and Jorgeson finally set off just after Christmas, posing for a photo at the end of their first day on the wall. Caldwell eventually leaped ahead of Jorgeson, whose battered hands prevented him from completing the 15th pitch—a term that describes the distance between two rest stops—without failing a few times. Caldwell cheered him on via Facebook. On Jan. 10, after 11 attempts, Jorgeson bested the pitch. “Pure joy,” he tweeted.

The pair may be camping on the side of a mountain and physically separated from most of the world, but they haven’t ignored everyone else. They’re both tweeting avidly. Before his battle with Pitch 15, Jorgeson even hosted a Twitter chat—#askdawnwall—from his perch.

Have a question about the Dawn Wall? Today @ 4pm PST, I’m hosting a live Q&A from El Cap! Tag your ?’s #AskDawnWall pic.twitter.com/gp5azwUFDN

Photographers have trailed the climbers, capturing stunning images as the pair ascends. The New York Times assembled a stunning composite of the entire rock face that puts the challenge in perspective.

If today is the pair’s last day on the Dawn Wall, they can count on friends and family meeting them at the top. The welcoming committee’s route to El Capitan’s summit will be much more conventional—but that’s kind of the point, isn’t it?