'The referendum is a matter for the British people to decide,' Buckingham Palace said in a statement 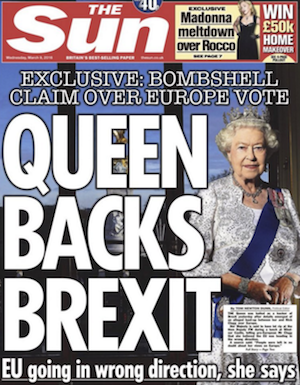 Under the headline “Queen Backs Brexit” — a British EU exit — The Sun quoted anonymous sources as saying the Queen had told then-Deputy Prime Minister Nick Clegg in 2011 that the EU was heading in the wrong direction. The story said the Queen “left no room for doubt about her passionate feelings over Europe.”

The palace said it had written to the Independent Press Standards Organization to complain that the story had breached a prohibition in the Editors’ Code of Practice against “inaccurate, misleading or distorted information or images, including headlines not supported by the text.”

The Queen is prohibited from taking sides in political debates and rarely makes her personal views public.

British politicians are immersed in a heated debate about Britain’s place in Europe ahead of a June 23 referendum on whether to remain in the 28-nation European Union.

The palace earlier declined to comment on “spurious, anonymously sourced claims” and insisted “the Queen remains politically neutral, as she has for 63 years.”

“The referendum is a matter for the British people to decide,” it said in a statement.

“I’ve no recollection of this happening (and) it’s not the sort of thing I would forget,” he tweeted.

The Sun didn’t immediately respond to the complaint.