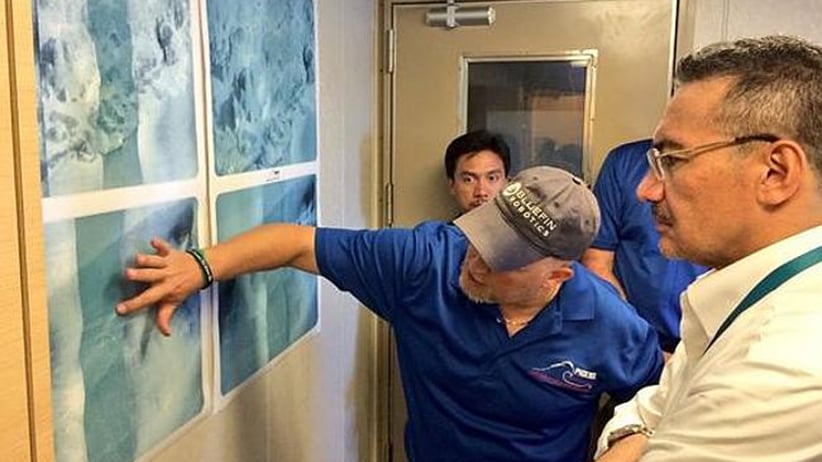 The search for MH370 goes on. Comms H2O being briefed in the Data Operation Room onboard the GO Phoenix. Hishammudin Hussein/Twitter

Transport Minister Liow Tiong Lai said a part found recently by an American in Mozambique is now in Malaysia for safekeeping.

He said a Malaysian team is expected to return this week from South Africa with another part found by a family holidaying in Mozambique. The family took the piece with them when they returned home to South Africa.

Liow said both pieces will be sent to Australia to be examined by an international investigation team. The plane vanished March 8, 2014, with 239 people on board while flying from Kuala Lumpur to Beijing.

“We want to be transparent and accountable in our investigation as much as possible … that is why we want (the parts) to be verified in Australia,” Liow said. He said a Malaysian team will be sent to Mozambique to comb its beaches for more possible debris.

He said another piece of plane debris recently recovered from Reunion Island will be sent to France, and French and Malaysian teams will work to verify its origin.

“At this juncture, it has not been confirmed whether any of the recovered debris came from MH370,” he said, urging the public to avoid speculation.

Liow said if the Flight 370 links were confirmed, the locations where the pieces were found would be consistent with ocean drift models done by Australia. Those models were used to determine the search area in the southern Indian Ocean.

The search is expected to end by June. A wing part found in Reunion last July is the only part so far confirmed from Flight 370.