Pope Francis in Armenia: 'Memory should never be watered-down' 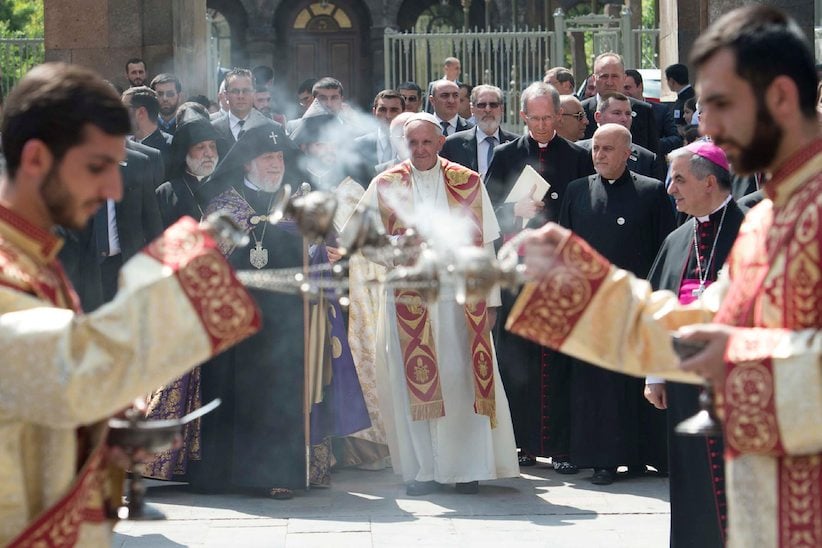 GYUMRI, Armenia — Pope Francis demanded Saturday that the world never forget or minimize the Ottoman-era slaughter of Armenians as he paid his respects at the country’s imposing genocide memorial after declaring the slaughter a planned “genocide” to annihilate an entire people.

Francis presented a wreath at the memorial and stood, head bowed, in silent prayer before an eternal flame as priests blessed him with incense and a choir sang haunting hymns.

“Here I pray with sorrow in my heart so that a tragedy like this never again occurs, so that humanity will never forget and will know how to defeat evil with good,” Francis wrote in the memorial’s guest book. “May God protect the memory of the Armenian people. Memory should never be watered-down or forgotten. Memory is the source of peace and the future.”

Related reading: The opening act of a genocidal century

Francis returned to the theme of memory during a Mass in Gyumri, where several thousand people gathered in a central square for his only public Catholic Mass of his three-day visit to Armenia. Gyumri, nestled in the rolling hills and wildflower fields of northwestern Armenia, has long been a cradle of Christianity, and Francis came here to pay homage to its faith even in times of trial.

“Peoples, like individuals, have a memory,” he told the crowd from the makeshift altar. “Your own people’s memory is ancient and precious.”

The Vatican has long held the Armenian cause dear, holding up the poor nation of 3 million mostly Orthodox Christians as a bastion of faith and martyrdom in largely Muslim region and the first nation in the world to adopt Christianity as a state religion in 301. 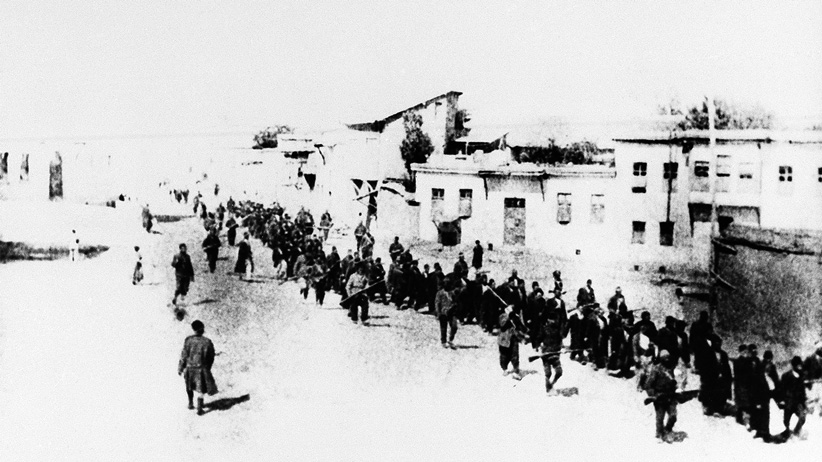 “Armenia is the first Christian country and we appreciate that the leader of the Catholic Church appreciates that,” said Yeranuhi Antonyan, a 20-year-old university student who was working as a volunteer at the Gyumri Mass. She and her classmate, Armine Karapetyan, said Francis’ genocide declaration wasn’t surprising, given he had said it before, but that it was a welcome sign that the world was increasingly coming to accept it as fact.

“We are glad everyone has started to understand what has happened. It happened,” Antonyan said.

In the most carefully watched speech of the trip, Francis on Friday ad-libbed the politically charged word “genocide” to his prepared text, listing the 1915 Armenian genocide alongside the Holocaust and Stalinism as the three great mass slaughters of the 20th century.

There was no immediate reaction from Turkey, which withdrew its ambassador last year and accused Francis of spreading lies when he first termed the slaughter a genocide. Turkey rejects the term, saying the 1.5 million death figure cited by historians is inflated and that people died on both sides as the Ottoman Empire collapsed amid World War I.

“Sadly that tragedy, that genocide, was the first of the deplorable series of catastrophes of the past century, made possible by twisted racial, ideological or religious aims that darkened the minds of the tormentors even to the point of planning the annihilation of entire peoples,” Francis said.

In the run-up to the visit, the Vatican had refrained from using the term “genocide,” mindful of Turkish opposition to the political and financial implications of the word given Armenian claims for reparations.

But Francis, never one to shy from speaking his mind, added the word at the last minute. President Serzh Sargsyan, Armenian political and religious leaders and the diplomatic corps in attendance gave him a standing ovation.

At the genocide memorial on Saturday, Francis greeted Verzhine Svazlyan, an Armenian historian widely known for her genocide research. Also approaching Francis was Sosi Habeschyan, 68, and her sister whose mother was a genocide orphan adopted and raised by Danish missionary Maria Jacobsen, who worked in the Ottoman Empire in 1915 and reported the massacre.

The Vatican spokesman, the Rev. Federico Lombardi, said Francis’ declaration of a genocide must be taken in the context of recognizing a past horror to then move on in friendship and reconciliation. He said the Vatican’s diplomatic speechwriters wanted to leave it up to the pope to decide what to say.

In a largely Orthodox land where Catholics are a minority, Armenians have seemed genuinely honoured to welcome a pope who has long championed the Armenian cause from his time as an archbishop in Argentina and now as leader of the 1.2-billion strong Catholic Church. His 2015 declaration that the massacres were considered a “genocide” sealed their affection for him.

“I shook the pope’s hand but didn’t have the time to kiss it,” 42-year-old Yerevan resident Nazik Sargsyan said Friday as Francis arrived. “I’m sure God’s blessing has come down on me with that handshake.”