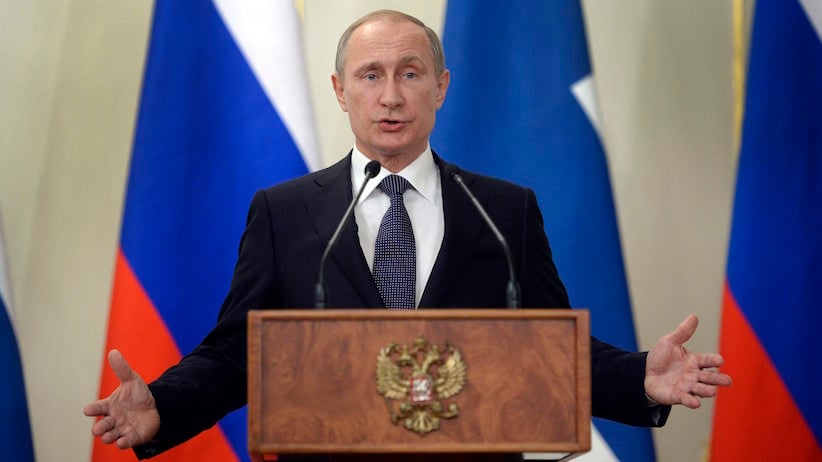 Russia appears to be angling to make it the G8 once again and President Vladimir Putin suggests it’s something Prime Minister Stephen Harper will just have to accept.

“I don’t want to offend anyone, but if the United States says Russia should be returned to the G8, the prime minister will change his opinion,” Putin told The Canadian Press during a meeting with the heads of world news agencies at the St. Petersburg International Economic Forum.

Russian officials dropped hints all day Friday that a deal might be the works for Putin to attend the next summit after missing two consecutive meetings.

Following the last gathering of leaders in Germany at the beginning of June, Harper made it clear he didn’t want Putin back at the table because he doesn’t share the values of the group.

“I came of the view, some time before the invasion of Ukraine, that his presence at the table of the G7 was not productive—in fact was inhibiting the kinds of discussions, the kinds of co-operation we could be having on a broad range of international issues,” Harper said at the conclusion of the summit in Schloss Elmau, Germany.

As late as a month ago, Russian Foreign Minister Sergei Lavrov downplayed the importance of the Group of Eight economic powers as an “informal club.” However speaking at his signature economic forum on Friday, Putin went on at length about how respect on the international stage was important to Russia.

Washington’s position is unclear, but having Russia resume its seat would mark an important thaw in international relations after months of Cold War-like rhetoric over Ukraine.

It would also represent a small personal embarrassment for Harper, who has been among Putin’s most vocal critics.

It came at the same time as Putin moved to drive a wedge among European countries as he called on the West to lean on Ukraine to honour all of the internal political reforms in the peace accord signed in Minsk.

The economic wooing of Greece—significant for the solidarity of the European Union—became an open courtship with an appearance and speech by Greek Prime Minister Alexis Tsipras at the forum.

Putin’s remarks about Ukraine came against the backdrop of fresh fighting in eastern regions and the impending renewal of international sanctions, which have dealt a body blow to the Russian economy.

He brushed off the dismal economy, telling the economic forum that the situation for Russia has “stabilized,” but he later added that sanctions hit Europe as hard as Moscow and the loss of tens of billions in economic growth hurts the entire world economy.

Instead of publicly signalling conciliation, Putin demanded Washington and other western nations, including Canada, pressure the government in Kyiv to “fully implement” the accord signed last winter.

In particular, he wants to see the promised constitutional overhaul that would give rebellious regions more autonomy.

Ukrainian President Petro Poroshenko has made it clear there will be no reforms as long as Russia keeps troops in his country.

His comments were echoed in a telephone conversation with Harper on Friday.

“Both leaders agreed that the Putin regime’s aggression and ongoing violation of the Minsk agreements must be met with continued resolve, including through the application of economic sanctions,” said Stephen Lecce, a spokesman for Harper.

Canada, along with the U.S. and Britain, is preparing to deliver combat training to the Ukrainian army, but the western allies have stopped short of providing weapons to the embattled country.

It became clear that European solidarity—the key to maintaining sanctions—was showing signs of cracking under the weight of a possible Greek default.

Tsipras delivered a clear signal in front of the international business audience that his country is prepared to embrace Russia—something that will increase concern his financially-strapped country is laying the groundwork for an exit from the EU.

A renewal of European sanctions is expected in late June. In the past, Greece has described the sanctions policy “economic warfare.”

No single country is allowed to break the sanctions regime,

The remarks were made in advance of an emergency meeting called by the EU for next week, where attempts will be made to reach a bailout deal for Greece.

Russia has signalled over the last few days that it’s prepared to provide some form of financial support to Greece, Officials said Friday no such request was made when Putin met with Tsipras.