Why do so few Syrians get out through any official refugee process? Michael Petrou and John Geddes consult experts for answers to this urgent question 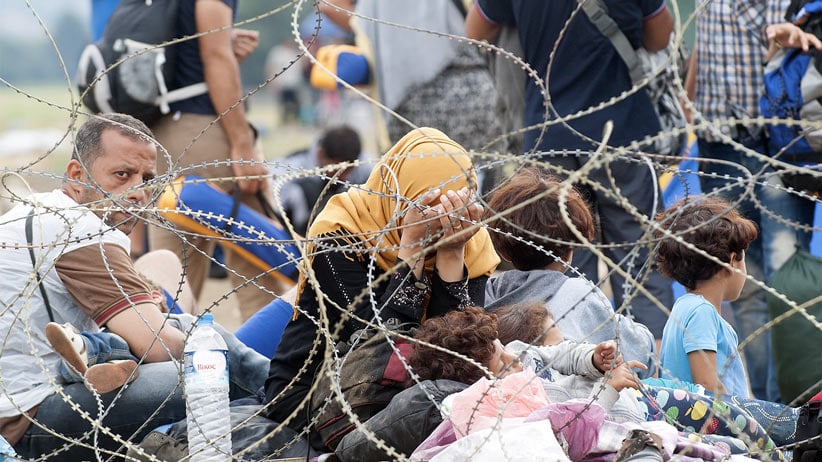 More than 1.5 million Syrians have fled their homes for neighbouring Turkey since 2011, but few Canadians were focused on their plight before this week. In this week’s sudden outpouring of concern, prompted by that deeply disturbing photograph of a drowned Syrian boy on a Turkish beach, the question of why so few Syrians get out through any official refugee process has emerged as an urgent question.

Turkey is providing sanctuary to more Syrian refugees from that country’s bloody civil war than any other, and should logically be a rich source of new Canadians who have private sponsors willing to support them in Canada. But few, if any, privately sponsored Syrian refugees have come to Canada from Turkey so far.

The project, which has been extended to this year, will apply to up to 100 persons and encompasses refugees in Turkey from Syria, but also Afghanistan, Iran and Iraq. But Faisal Alazem, a spokesman for the Syrian Canadian Council, is unaware of any Syrians who have arrived in Canada through the pilot project. (CIC did not respond to a Maclean’s request for information by the time this article was published.)

Related reading: A Maclean’s primer on the Syrian migrant crisis

One of the reasons slowing or stopping the influx of privately sponsored refugees from Turkey may be the documentation required. Paul Clarke, director of Action Réfugiés Montréal, says his understanding is Syrian refugees in Turkey must have entered the country legally on a valid passport to qualify for the program. They must also have a passport that will continue to be valid for three months beyond their application date, he adds, and have registered with local Turkish authorities and obtained one of four identification cards, such as a work permit.

“It’s not impossible, but it’s very difficult,” he says. Many Syrians in Turkey would struggle to meet even the first requirement because, fleeing war, they entered Turkey illegally. Many also lack valid passports.

Don Smith, chair of the Anglican Diocese of Ottawa’s refugee working group, says Turkey’s rules making it hard for refugees to leave the country date back many years before the Syrian migrant crisis. “Turkey was afraid that they would become the gateway into Europe,” he said. “So to discourage Middle Easterners trying to get into Europe through Turkey, they made it extremely difficult for them to get an exit visa to get out of Turkey.”

As Syria’s civil war began sending waves of refugees into neighbouring countries starting in 2011, Turkey was generous in opening its borders, but perhaps slow in adapting those old restrictions on letting refugees move on. “You can quibble with some of the details, but by and large [Turkey] allowed people to come and [gave] them assistance to the degree that they are able,” said Elizabeth Ferris, a senior fellow at the Washington-based Brookings Institution, who has travelled regularly to Turkey over the past few years to assess the refugee situation.

Related reading: A refugee crisis is only half the story in Syria

Although Ferris praises the Turkish government’s willingness to accept so many refugees, she says the country has not let the United Nations High Commissioner on Refugees take the lead on handling the massive problem. “The Turkish government is running the show with respect to the refugees in Turkey,” she says. “In other countries, the UNHCR basically runs the camps, as in Jordan. But in Turkey, the UNHCR has had to be very deferential and careful.” That limited UNHCR role matters, because Canada, like other countries that accept refugees identified overseas, almost always chooses individuals from the UNHCR’s lists of those vetted for resettlement.

Syrian refugees in Turkey might also be sponsored through something known as the “group of five” process—which involves five or more Canadian citizens who have agreed to sponsor and support a refugee coming to Canada. Tima Kurdi, the aunt of Alan and Galib, the two boys who drowned trying to cross the ocean from Turkey to Greece, was trying to follow this path in her attempt to bring over another brother, Mohammed, and his family.

According to Peter Showler, an expert on refugee law at the University of Ottawa, a G5 process typically takes between four and five years between when an application is made and when a sponsored refugee arrives in Canada. The red tape is no less onerous. Showler says about half of all G5 applications are rejected in what he describes as a “bureaucratic obstructive process.”

The result, he says, by intention or not, is to discourage people from attempting the G5 option. “Is it a matter of incompetence, or is it deliberately complicating the process?”

The application for Tima Kurdi’s brother Mohammed was rejected because it lacked proof of refugee status recognition, according to a statement from CIC. But Syrians in Turkey cannot register as refugees with UNHCR, because they are not considered legal refugees by Turkey—but are rather designated as being under Ankara’s “temporary protection.”

This policy dates to Turkey signing the 1951 Refugee Convention during the the Cold War, says Selcuk Unal, Turkey’s ambassador to Canada, when Ankara granted refugee status to migrants fleeing the Soviet Bloc but not from those crossing its borders from the south and east.

But the fact that Syrians aren’t considered legal refugees in Turkey shouldn’t prevent a migrant from obtaining a travel permit from the Canadian embassy in Turkey, Unal said in an interview. “It’s more of a bilateral process between a person and embassy staff,” he said.

In practice, however, most countries are reluctant to accept refugees abroad for permanent settlement who have not gone through a UNHCR screening process.

Unal rejects the allegation that Turkey intentionally frustrates the private sponsorship of refugees from its soil because it doesn’t want to become even more of a magnet for migrants hoping to obtain private sponsorship from countries in the West. Hundreds of thousands are coming anyway, he says.

“It’s not our intention to keep people in Turkey—on the contrary. Why would we do that? Because it is also a burden for us.”

Smith says Turkey seems to want to speed things up. “The Turks want to come up with a solution,’ he says. “They don’t want those people staying there.” As for Canada’s response, he praised the quality of the Canadian visa offices in Ankara, Amman and Beirut in coping with the enormous workload generated by the Syrian crisis, but said more visa officers would help.

But Showler says Syria’s refugee crisis demands a unique response from Canada. As Canada did when thousands of Vietnamese so-called “boat people” were resettled in 1979 and 1980, he says Canada should create an emergency program that would allow Syrians to be quickly granted temporary asylum here. They could then apply for permanent residency from Canada.

Syrians who believe they may be accepted to Canada without struggling through a years-long application procedure with seemingly little chance of success may be less likely to risk death trying to reach the West in small and leaking boats.