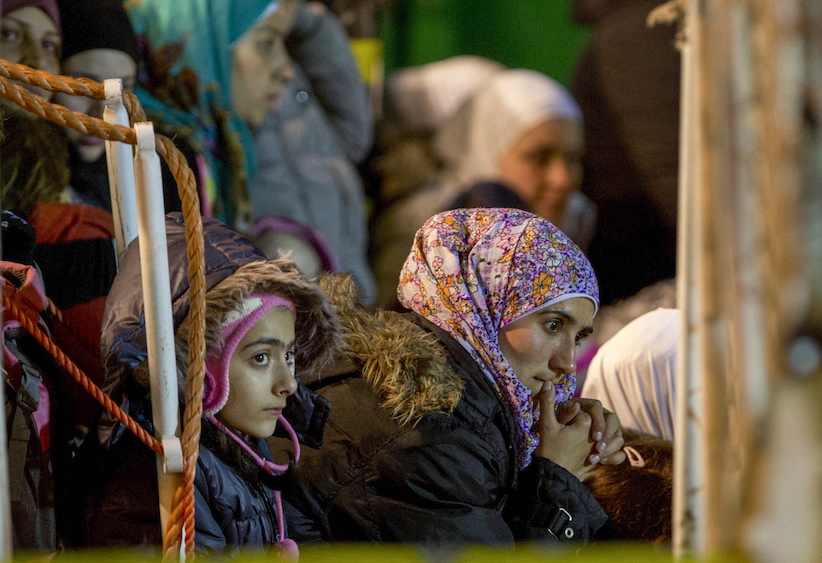 Migrants wait to disembark in the Sicilian harbor of Pozzallo. About 100 migrants were rescued on Sunday by a merchant vessel in the Sicilian Strait. Another smuggler’s boat crammed with hundreds of people overturned off Libya’s coast on Saturday. (AP Photo/Alessandra Tarantino)

ROME — A smuggler’s boat crammed with hundreds of people overturned off Libya’s coast as rescuers approached, causing what could be the Mediterranean’s deadliest known migrant tragedy and intensifying pressure on the European Union Sunday to finally meet demands for decisive action.

Survivor accounts of the number aboard varied, with the Italian Coast Guard saying that the capsized boat had a capacity for “hundreds” of people. Italian prosecutors said a Bangladeshi survivor flown to Sicily for treatment told them 950 people were aboard, including hundreds who had been locked in the hold by smugglers. Earlier, authorities said a survivor told them 700 migrants were on board.

It was not immediately clear if they were referring to the same survivor, and Premier Matteo Renzi said Italian authorities were “not in a position to confirm or verify” how many were on board when the boat set out from Libya.

Eighteen ships joined the rescue effort, but only 28 survivors and 24 bodies had been pulled from the water by nightfall, Renzi said.

These small numbers make more sense if hundreds of people were locked in the hold, because with so much weight down below, “surely the boat would have sunk,” said Gen. Antonino Iraso, of the Italian Border Police, which has deployed boats in the operation.

Prosecutor Giovanni Salvi told The Associated Press by phone from the city of Catania that a survivor from Bangladesh described the situation on the fishing boat to prosecutors who interviewed him in a hospital. The man said about 300 people were in the hold, locked in their by the smugglers, when the vessel set out. He said that of the 950 who set out aboard the doomed boat, some 200 were women and several dozen were children.

Salvi stressed that there was no confirmation yet of the man’s account and that the investigation was ongoing.

Iraso said the sea in the area is too deep for divers, suggesting that the final toll may never be known. The sea off Libya runs as deep as 3 miles (5 kilometres) or more.

“How can it be that we daily are witnessing a tragedy?” asked Renzi, who strategized with his top ministers ahead of Monday’s European Union meeting in Luxembourg, where foreign ministers scrambled to add stopping the smugglers to their agenda.

Resurgent right-wing political parties have made a rallying cry out of a rising tide of illegal migration. So far this year, 35,000 asylum seekers and migrants have reached Europe and more than 900 are known to have died trying.

With Sunday’s tragedy, demands for decisive action were going mainstream, as authorities from France, Spain, Germany and Britain joined calls for a unified response.

“Europe can do more and Europe must do more,” said Martin Schulz, president of the European Parliament. “It is a shame and a confession of failure how many countries run away from responsibility and how little money we provide for rescue missions.”

Renzi said he too wants action, but he rejected calls by some Italian lawmakers for a naval blockade. That would only “wind up helping the smugglers” since military ships would be there to rescue any migrants, and they wouldn’t be able to return passengers to chaos and violence in Libya.

Meanwhile Sunday, rescuers were “checking who is alive and who is dead” in an area littered with debris and oil from the capsized ship. Maltese Prime Minister Joseph Muscat, whose island nation joined the effort, said only 50 survived, and called it the “biggest human tragedy of the last few years.”

The 20-meter (66-foot) vessel may have overturned because migrants rushed to one side of the craft late Saturday night when they saw an approaching Portuguese-flagged container ship, the King Jacob, which was sent to the area by Italy’s Coast Guard. The ship’s crew “immediately deployed rescue boats, gangway, nets and life rings,” a spokesman for its owner said.

Asked whether migrants rushed to one side as the Portuguese vessel pulled close, Iraso told Sky TG24 TV that “the dynamics aren’t clear. But this is not the first time that has happened.”

Renzi praised the container ship for quickly responding on what would become its fifth recent rescue operation.

“Since the waters of the Mediterranean Sea are not too cold at the moment, authorities hope to find more survivors,” said International Organization for Migration spokesman Joel Millman.

United Nations refugee agency spokeswoman Carlotta Sami tweeted that according to one survivor, the boat had set out with 700 migrants aboard. When it overturned, “the people ended up in the water, with the boat on top of them,” Sami told Italian state TV.

“There are fears there could be hundreds of dead,” Pope Francis said in St. Peter’s Square, lending his moral authority to the political calls for action by urging “the international community to act decisively and promptly, to prevent similar tragedies from occurring again.”

Desperate migrants fleeing war, persecution and conflict in Africa, the Middle East and Asia have long tried to reach Europe. Libya has increasingly become a more frequent point of departure in the years since rival militias, tribal factions and other political forces destabilized the country following the bloody end of Moammar Gadhafi’s dictatorship.

Malta and Italy are closest to the Libyan coast, and have received the brunt of a migrant tide that carried 219,000 people from Africa to Europe last year. Some 3,500 are known to have died along the way, the U.N. High Commissioner for Refugees Antonio Guterres said in a statement Sunday.