How Keystone could still happen 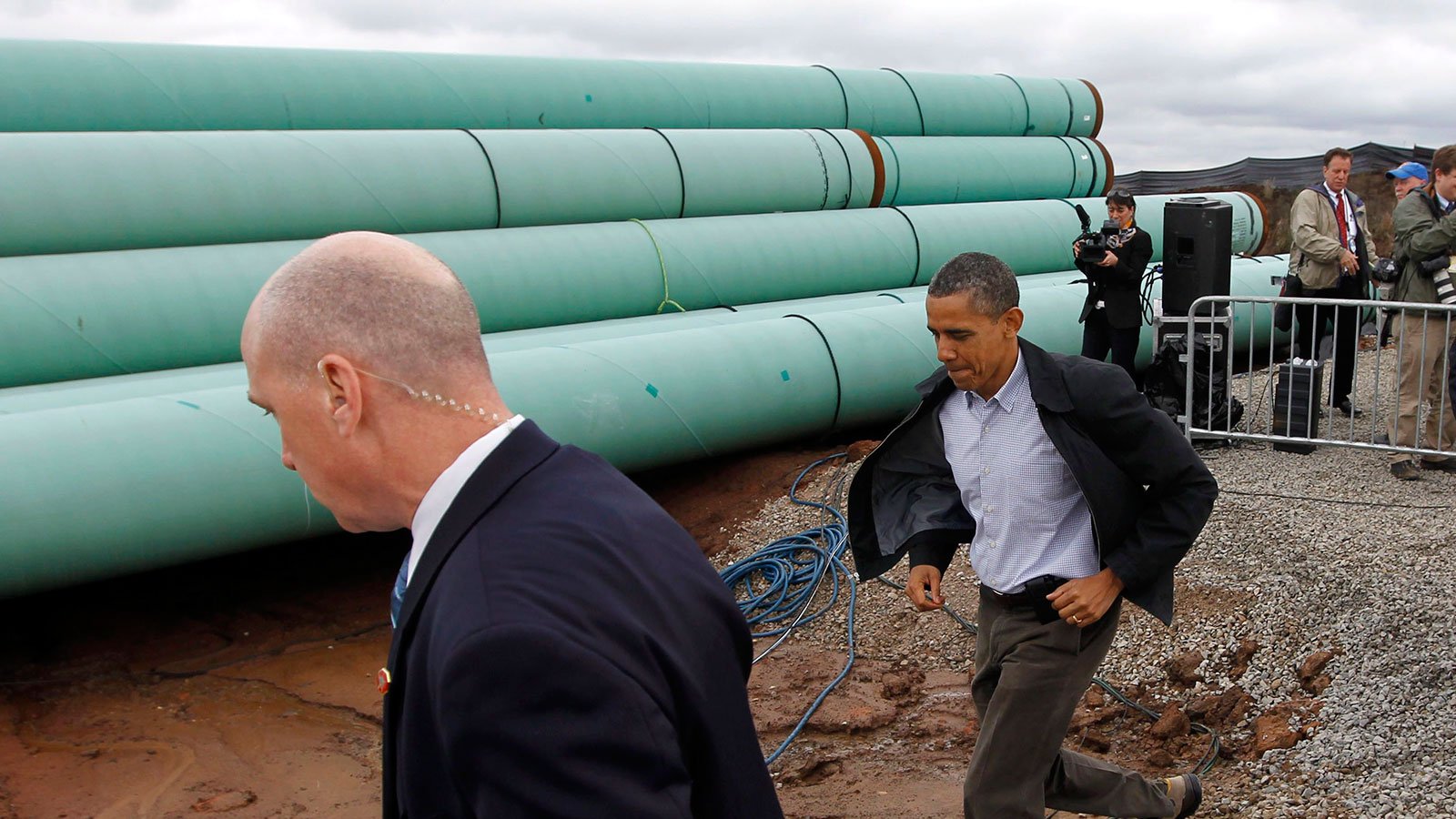 With a legal tussle in the Nebraska state courts and new delays at the U.S. State Department, the fate of the Keystone XL pipeline could now be in the hands of a handful of Democrats in the U.S. Senate. That is, if John Hoeven gets his way. Hoeven, a mustachioed Republican senator from North Dakota, a state undergoing a massive oil boom courtesy of the Bakken Shale formation, is one of the biggest boosters of the proposed Keystone XL project. The pipeline would carry some 100,000 barrels per day of light, sweet crude oil from the Bakken—along with heavy diluted bitumen from Alberta’s oil sands—to refineries in the southern U.S.

Frustrated by the Barack Obama administration’s review process for the pipeline, now in its sixth year (“It’s past time!” he says), Hoeven has long aspired to end-run the presidential-permit process by authorizing the pipeline through congressional legislation. But Republicans hold only 45 out of 100 Senate seats, and the chamber’s agenda is controlled by the Democratic majority leader, Harry Reid of Nevada, an outspoken critic of the project who has said the pipeline would increase “our dependency on unsustainable supplies of dirty and polluting oil that could easily be exported.”

This opposition, however, can be overcome. On paper, there is majority support in both chambers for approving the pipeline. The Republican-controlled House of Representatives passed legislation authorizing the pipeline in 2012. And, just over a year ago, 62 senators, including 17 Democrats, voted in favour of a non-binding resolution that expressed support for the pipeline. But Democratic backers of the pipeline have been reluctant to force the President’s hand—until now. With a new delay announced by the Obama administration, Hoeven tells Maclean’s that he sees his best chance yet to push an approval of the pipeline through the Senate.

Pro-pipeline lawmakers are emboldened by the latest delay. On April 18, the State Department put the review process on hold for an unspecified amount of time, citing an ongoing court battle over the proposed route in the state of Nebraska. (A state court struck down the route approved by the state’s governor and the decision has been appealed.) The latest delay is expected to push a decision on the project—a simmering issue and fundraising opportunity for both sides—past the November mid-term elections.

While environmentalists were heartened by the delay, pipeline supporters in Congress are hardening their resolve. Hoeven thinks the latest delay is the push needed to persuade lawmakers to take the pipeline approval into their own hands. “I think, right now, we have a strong chance to force a vote. I hope to pass the measure and approve it,” he says.

Hoeven acknowledges he will need a super-majority of 60 votes (out of 100 senators) to force a vote on his Keystone approval —which could be brought up as a Republican amendment to a different bill—and to fend off procedural hurdles, such as a potential filibuster by opponents. Hoeven says he’s only four votes away from that goal. “We are at 56 that would stand up and say, ‘Yes, we want a vote,’ ” says Hoeven. Another seven or eight Democrats “are undecided, or say they may vote for it.”

The Democrats willing to buck their President tend to be those from conservative or energy-industry states where Obama is unpopular, especially those up for re-election. (One-third of Senate seats are in play in November.)

Hoeven’s pitch to them is that the latest delay shows Obama is unwilling to make any decision at all, even though the State Department has repeatedly found that the pipeline would have no significant environmental impact. “The President has demonstrated that he is trying to defeat the project through endless delays, so that there will never be a decision,” he says, adding that a permit need not wait for Nebraska courts to resolve the legality of the proposed route. “If you say we won’t approve the project until all litigation is fully exhausted, you would never, ever, approve the project, because there would just be continuous lawsuits on various issues,” he says.

Some, such as Democrat Mary Landrieu, running for re-election in Louisiana, an oil-refining state, have made a point of supporting the pipeline. Landrieu was one of 11 Democratic senators who wrote to Obama in April, asking for him to make a decision by the end of May. They wrote that the review had already “taken much longer than anyone can reasonably justify.”

“You’ll have Democrats up for election in energy-producing states who would love to take a vote on this,” says Norman Ornstein, a congressional analyst at the American Enterprise Institute. But at the same time, Harry Reid has to worry whether the potential passage of pipeline legislation could dampen voter turnout among environmental-minded voters in the President’s party; Democrats traditionally turn out to vote at lower rates in mid-term elections as it is. “The last thing [Democratic leaders] want is to have the pipeline go through and have liberals sit on their hands in November. They’d rather keep this issue up in the air, and they’d rather blame the President than the Senate,” he notes.

But can Congress really step in and big-foot the presidential permit power? It’s true the President does not, in fact, have exclusive power over cross-border pipelines. The presidential permit process traces back to an executive order issued by president Lyndon Johnson in 1968 that instructed the secretary of state to issue permits to cross-border infrastructure projects that the secretary deemed to be in the “national interest.” (Domestic pipeline permits have been left up to the state governments.) Hoeven asked the non-partisan Congressional Research Service to analyze whether Congress had the authority to step in and trump a presidential action—or inaction—in that area.

In January 2012, a team of four legislative attorneys came back with a 29-page report that concluded “Yes.” Although the President has a general power over foreign affairs, the U.S. constitution explicitly authorizes Congress to “regulate commerce with foreign nations.” Because of this “clearly enumerated” power, the lawyers wrote, Congress’s “authority in this field is pre-eminent.” Congressional power is so sweeping that, in 1824, the U.S. Supreme Court declared, “No sort of trade can be carried on between this country and any other, to which this power does not extend.” Reviewing historical precedents, the lawyers found that Congress had in the past “passed several statutes relating specifically to petroleum or pipelines, and some of these require the President to make particular findings.”

Past presidential permits had been issued in the “absence of either a congressional grant or denial of authority.” But if Congress decided to begin to assert authority, it would be acting well within its constitutional authority, the lawyers advised. Congress could overturn a permit denial, set out criteria for approval, “or potentially require the issuance of permits to entities that fulfill such criteria.”

Of course, even if both houses of Congress were to pass the legislation, it would still need to be signed by Obama. Overcoming a presidential veto takes 67 votes in the Senate, so Hoeven and his allies would need to be strategic. In 2011, Congress appended an earlier round of legislation about Keystone XL that Obama signed despite his objections, because it was attached to an overwhelmingly popular extension of a payroll tax cut he did not want to veto. One challenge will be to find another piece of must-pass legislation to attach a Keystone amendment to.

If this push fails, pipeline supporters will have another chance if Republicans win a majority this fall; they need a net gain of six seats to do so. “If the election goes well in November,” says Hoeven, “we’ll be in an even stronger position”

And a longer-term response to the Keystone XL has been proposed in the House of Representatives. Congressman Lee Terry, a Republican from Nebraska, has proposed taking away the presidential permit power in general and putting an independent energy regulatory agency in charge of all future cross-border pipelines. In the Senate, however, Hoeven is not quite ready to embrace the move.

“Based on what has transpired with Keystone XL, I would certainly be willing to consider it, but I would want to think that through carefully before making that change,” he says.