Scotland and the search for home

Paul Wells on identity politics in Scotland and elsewhere 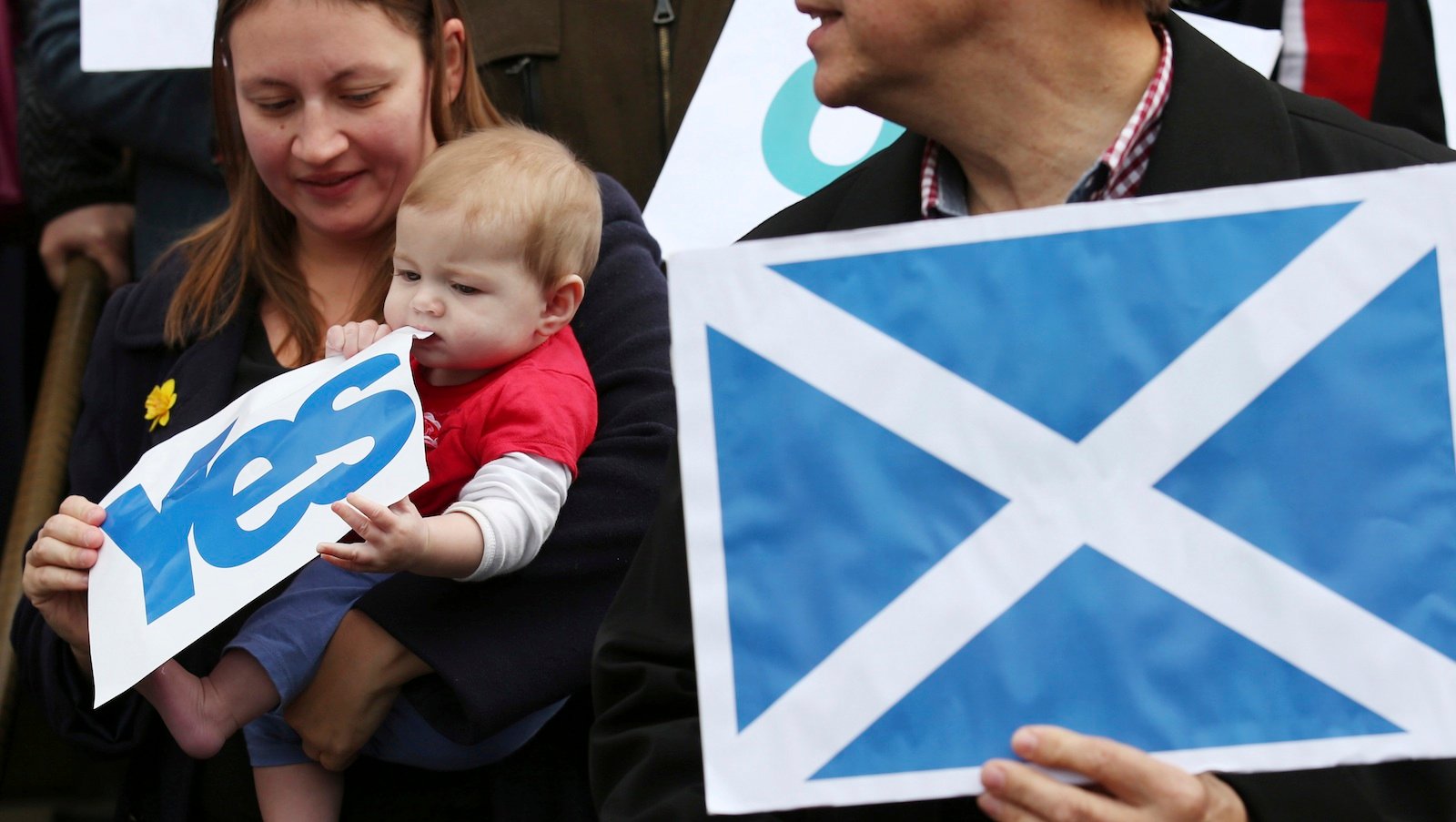 In Our Times, a survey of British history since the end of the Second World War, A.N. Wilson considers the progress in Great Britain since 1945—when “over half the adult population over the age of 30 had no teeth”—and reaches starkly contradictory conclusions. On one hand, thanks to “improvements in living standards, and the enormous increase in national prosperity, and sexual liberty, it would be perverse not to rejoice.” On the other: “It would be a bold person who stood up and said that the reign of Elizabeth had been Britain’s most glorious period. For the reign of Elizabeth is the one in which Britain effectively stopped being British.”

Wilson’s reasons will strike readers as self-evident or as claptrap, depending on their own attitudes toward big questions. He blames “mass immigration,” the “sacrifice” of Britain’s national sovereignty to the European Union, the “virtual dissolution of the Church of England,” and comprehensive education, which “made anyone who could afford to—and many who scarcely can afford it—educate their children privately.” When Elizabeth was crowned in 1952, the world still had Evelyn Waugh and Churchill and Benjamin Britten in it. Britain’s failure to produce anyone comparable since is, to Wilson, “an infallible sign of the death of the culture.”

So one question this week, as anti-independence campaigners pleaded with Scots to make room in their hearts and votes for a larger notion of Britishness, is whether Britishness is particularly a large notion any more. After the U.K.’s Prime Minister David Cameron, Labour Party Leader Ed Miliband and Deputy Prime Minister Nick Clegg visited Scotland last week in a full-court press by the major Westminster parties, the Yes campaign pushed out a sharp little online ad: “Imagine a country where our leaders are here all the time.” Of course, that meant a country where Scots rule Scots. But, also, of course, that amounted to trimming the definition of Scots’ “country” and the notion of who could be “our leaders” with a meat cleaver. A country where our leaders are here all the time? “We have such a country and it is called the United Kingdom,” Alex Massie wrote. But if you need to say it, it can’t be a very powerful notion. The sense that Britishness isn’t what it used to be is an unspoken theme here, or perhaps not that unspoken: The attempts by Cameron and Miliband to intervene in this campaign have been greeted with naked contempt. Former Canadian prime minister Jean Chrétien’s speeches during the 1995 Quebec referendum were much more momentous, partly because, while the Quebec intelligentsia rejected him as a folkloric figure, to a lot of Quebecers, he seemed enough like one of them to have voice in the conversation. That’s been lacking here. And Scottish nationalism has grown to fill that emptiness where a sense of home used to be, even though, truth to be told, to a visitor, Scotland doesn’t seem all that Scottish, either.

Wilson’s book is true or, at least, arguable, as far as it goes, but if national identity can be eroded by immigration, secularization, public education and supra-national association, then who’s immune? The week’s other big vote in Europe was in Sweden, where the only party to make gains was a bunch of Swedish-identity populist anti-immigrants with unusually stylish tailors. Jean-Marie Le Pen’s daughter has led recent polls for the French presidency. This year’s descent by the Parti Québécois into a genteel suspicion of just about anyone who shows evidence of religion or studies at McGill University was, in some ways, a sign of exhaustion: Since 1960, Quebec’s intellectual leadership has been shucking off signs of cultural particularity, especially the dominant role of the Catholic church. Now some are wondering whether there’s any nous left when they talk of nous.

All of this may help explain why, as the Scots independence debate has turned into a crescendo of claims and counter-claims about the economic cost of secession, some large fraction of the Scottish electorate isn’t interested. My own hunch is that an independent Scotland would, in 30 years, be doing fine and maybe better than fine. And that the United Kingdom, whose history is rich in upheaval, could handle this one with little difficulty. There would be transition costs, and they would be borne disproportionately by people whose means are so modest, they have a hard time handling any new cost, but a lot of them will vote Yes tomorrow anyway. That’s only irrational if you assume voters are, or should be, profit maximizers before all else.

One of the bits of writing sunk into the wall of the Scottish Parliament is a short verse by Hugh MacDiarmid:

The rose of all the world is not for me.

I want for my part

Only the little white rose of Scotland

That smells sharp and sweet—and breaks the heart.

There is no calculation of economic advantage there, and it is not a particularly broad, enlightened or cosmopolitan sentiment, either. But people around the world have organized their lives around pangs as vague and hard to explain or justify. Sometimes things like that just happen.