Scotland to allow 16-year-olds to vote on independence

Why everyone is a wee bit nervous 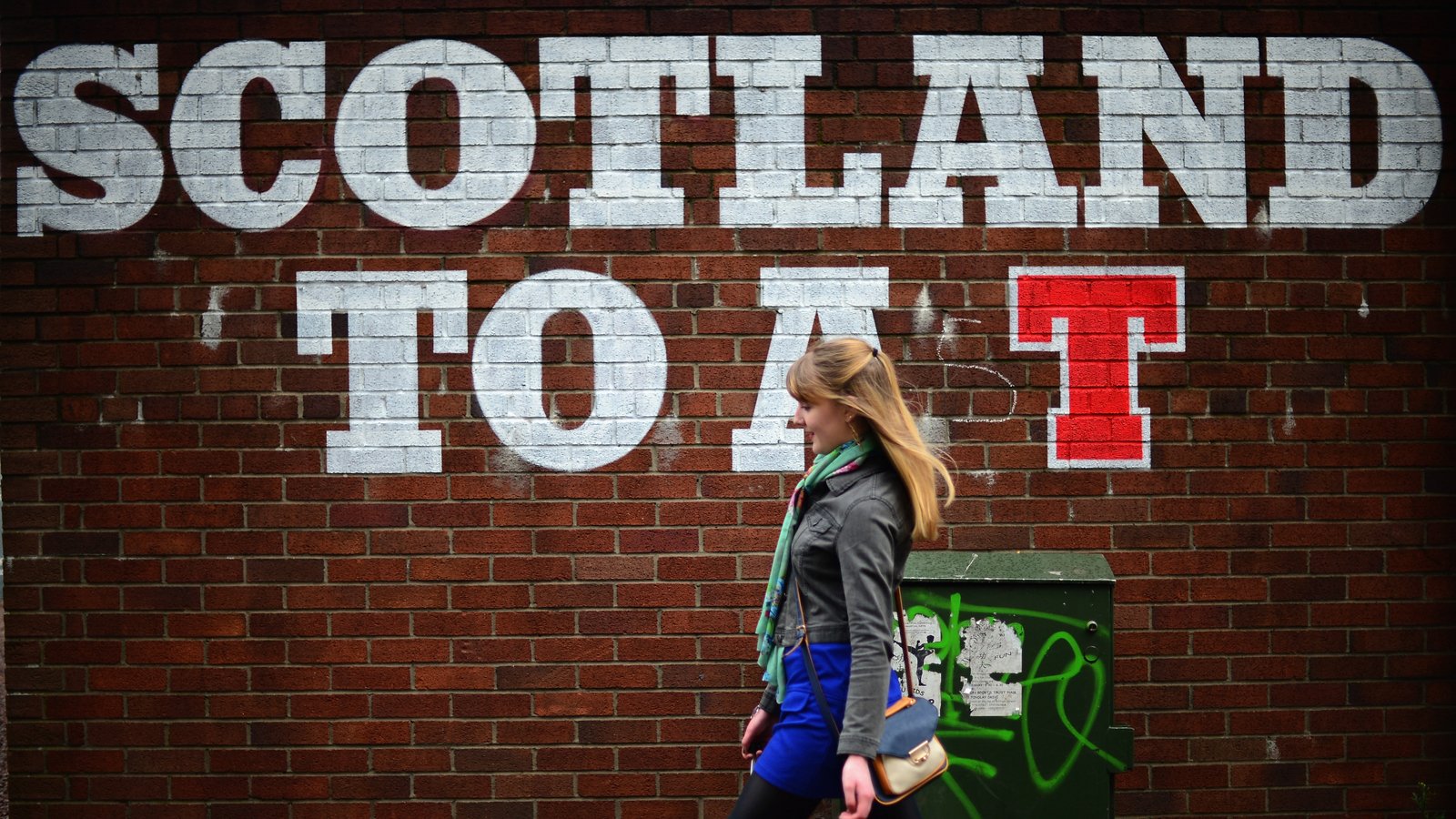 Last September, Saffron Dickson, then 15 years old (now “16 and three-quarters”), attended a televised BBC debate in Glasgow on the subject of the upcoming Scottish referendum. Partway through the show, the host opened the floor to comments—and Dickson shot for the mike. Smiling saucily for the cameras, in bleached-blond hair and a dark leather jacket, she gave the people of Scotland an earful:

“We don’t live in a country where we have equal rights,” she cried, raising a furious hand to the sky. “Westminster bakes the Empire Biscuit and we put the jelly tot on top. And we’re supposed to be completely ecstatic about having that little bit of power. But we won’t be silenced by your ideology!”

Within weeks, Dickson had become “a wee bit” of a political celebrity in Scotland, which is now less than two months away from a historic referendum on independence from Britain. Today, Dickson is on the central board of Generation Yes, a large pro-independence youth movement, and a regular media fixture. Asked whether she hopes to run for office one day, she’s emphatic: “Yes!”

Dickson spoke recently with Maclean’s in the lobby of a swish hotel in central Glasgow, where she sometimes entertains journalists after school. Over the course of an hour, she spoke rapidly (and sometimes almost tearfully) about a range of issues: tuition fees, nuclear weapons, Palestine, Iraq, government “propaganda,” and the need to protect “our grandchildren’s futures.” But Dickson—who describes herself as “from a working-class background in a socially deprived area”—says she backs independence largely because she’s a socialist. On Sept. 18, the day of the vote, she will put her faith in the big-state promises of the pro-independence Scottish National Party (SNP).

Dickson is probably just the girl that SNP Leader Alex Salmond had in mind when he cut a controversial deal with British Prime Minister David Cameron to lower the referendum voting age from 18 to 16. The voting age for regular U.K. elections remains set at 18—and the Conservative government in London had initially resisted lowering it in Scotland for the referendum. Supporters of the move said it would be a win for democracy, but opponents made the arguments one might expect: that teenagers lack sufficient life experience to make complex political choices, and that the referendum was not the time to test out new electoral systems.

Not surprisingly, the battle for Scotland moved into the schools. Last summer, the pro-Union “Better Together” campaign announced plans to send “teacher resource packs” to schools, which would include referendum-themed lesson plans, research material and mock-debate kits. “Yes Scotland,” the leading pro-independence movement, accused Unionists of “seeking to influence schoolchildren,” and urged the No side to seek guidance from the electoral commission first—before announcing it would put together its own school materials. A few months later, the SNP-run Scottish government sent out “independence packs” to teachers, which Labour Party Member of the Scottish Parliament (MSP) Drew Smith dismissed as taxpayer-funded “government propaganda.”

Nevertheless, from this fertile ground, new political stalwarts have begun to emerge: young, slogan-spitting Scots who play active—and often, very senior—roles in the Yes Scotland and Better Together campaigns. Already, around 100,000 teens aged 16 and 17 have registered to vote in the referendum (known in Scotland as “Indy” or #indyref), an impressive feat in a nation that has historically suffered from anemic young-voter turnout.

The SNP’s effort to lower the voting age was perceived by some as a ploy: to capitalize on the fact that young voters typically lean left—in a nation already well-known to lean left. (The ruling SNP is often perceived as left of Labour.) But a recent survey of more than 1,000 teenagers by Carrington Dean shows that many enfranchised Scottish teenagers actually want to stick with England—and that some two-thirds are worried about the economic viability of an independent Scotland.

Ross Greer, 20, isn’t. A leading campaigner, Greer serves as “communities coordinator” for the nation-wide Yes campaign: “facilitating and encouraging all of our grassroots community groups across the country.” On a recent Monday, he greeted Maclean’s in the lobby of Yes headquarters, in central Glasgow. Tall and thin, and with bright red hair, he wore a T-shirt with the words No Pasaráran printed in large letters. “It’s an anti-Fascist slogan,” he explained. “It goes back to the Spanish Civil War.”

Greer, a member of the Scottish Green party, has dropped out of university to campaign full-time for independence. He supports the Yes side because of its pledge to pass more power to the local level, and its vow to remove British nuclear missiles from Scotland. “I was born after the Cold War ended,” Greer explains. “It’s not relevant anymore.”

The Yes side is known for its energized young campaigners. Generation Yes is a self-governing, independent campaign group. Better Together “youth representatives,” by contrast, are selected by campaign headquarters, after applying with a CV and a 300-word essay “explaining why you believe Scotland should remain in the U.K.” But younger voters are active on both fronts.

Hannah Bettsworth, 19, is a second-year student at the University of Edinburgh, where she campaigns for Better Together. Bettsworth is voting No for economic reasons; namely, she’s concerned about graduating the year that independence would go through: “I’m not saying that Scotland wouldn’t be able to establish an independent country in the long run . . . But I don’t want to be the year going into untested water.”

James Reekie is similarly swayed by economic arguments. “What the SNP wants to do is take what is business’s biggest market [the U.K.] and make it business’s biggest competitors, which is an economic disaster,” scoffs Reekie, who, at the ripe age of 22, is the vice-chairman of the Scottish Conservative Party. (He ran for office in a by-election in Dumfernline last year, but lost.) Over coffee at a busy Starbucks in Glasgow, Reekie explained that he is an atypical Conservative supporter. “I’m from a very working-class background: a mining community in Fife,” he says. In that part of the country, joining the Tories (which Reekie did at age 16) is considered “anti-establishment” behaviour.

The fevered fight for Scotland will no doubt get even hotter in the last final weeks before the vote, and it will be fed by this new generation of Scottish politicos. The grown-ups seem to be getting tired. On a recent evening, the Pot Still—a famous whisky bar on Glasgow’s Hope Street—was full of silver-haired Scots, bent over wee drams of drink. By the entrance, near a display of warm meat pies, a chalkboard sign warned patrons: “No indy debates at the bar.”