Both loved and loathed, the 1995 film classic looms large in the battle over Scottish independence 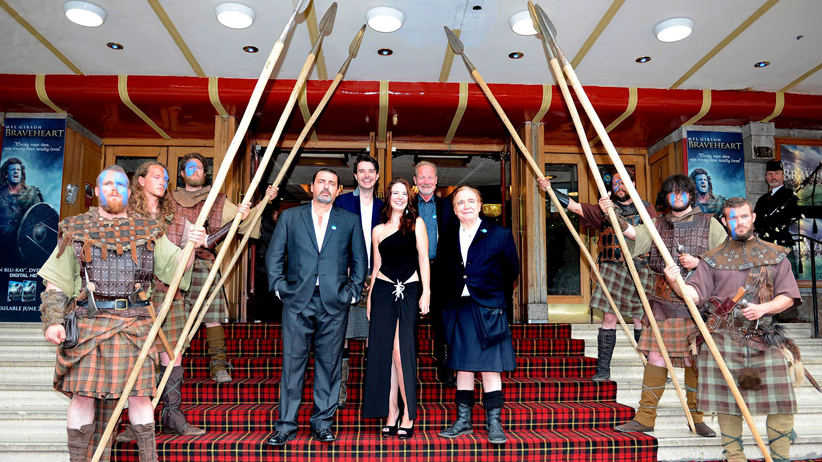 In late June, a bunch of aging Scottish actors gathered in Edinburgh for a screening of Mel Gibson’s 1995 epic Braveheart. The occasion was the 700th anniversary of the Battle of Bannockburn, depicted in the film, in which, after a series of humbling defeats, a contingent of scrappy Scottish warriors routed King Edward II’s army of English invaders. That the screening came during the campaign for Scotland’s Sept. 18 referendum—in which voters will decide whether to break from England and declare independence—escaped no one’s notice, including the cast members.

Stars Peter Mullan, Angus Macfadyen and Brian Cox all turned up at the Dominion cinema with wee blue ‘Yes’ pins on their lapels, indicating their support for Scottish independence. “Braveheart was just a movie, but this referendum is the real deal,” said Cox, who played Argyle Wallace, uncle of the warrior hero William Wallace (played by Gibson).

“I’m for ‘Yes,’ ” echoed Macfadyen, who played the Scots king, Robert the Bruce. (Gibson, in various interviews, has expressed pleasant surprise that this film has resonance so long after it was made, but hasn’t directly commented on the referendum.)

The shadow of Braveheart hangs over the referendum campaign. Supporters of “Better Together” (the pro-union side, alternatively titled “No Thanks”) have accused independence supporters of harping on about long-ago history, in an effort to stoke Scottish nationalism. In turn, ‘Yes Scotland’ champions have worked to distance themselves from tribalism, England-bashing and appeals to historic enmity. They are not interested in discussing Braveheart (described by the Times as one of “the 10 most historically inaccurate movies” of all time). “Every time a journalist brings up Braveheart—the minute they bring it up—I know they have no idea what’s going on,” says Scottish National Party (SNP) MP Angus Robertson. “You don’t win votes about the next 700 years by talking about the last 700 years.”

Things were different when Braveheart first premiered in Scotland: The marginal SNP was angling for support and the film was a welcome hit. SNP activists distributed Gibson-inspired political leaflets outside cinemas. In a major conference speech that year, party leader Alex Salmond declared himself “with Wallace, head and heart”—and borrowed the brawny hero’s famed “Freedom, freedom, freedom” cry. Back then, “the SNP was seen as the so-called tartan fringe of Scottish politics,” acknowledges Graeme Sneddon, a Glasgow-based Yes campaigner. Today, he argues, that legacy leads some unionists to unfairly dismiss Yes Scotland as “all Braveheart and bagpipes.”

Today, allusions to William Wallace are likely to come from the No side. In July, Scottish Labour MP Douglas Alexander, who represents the constituency where Wallace was born, insisted that his constituents have “brave hearts but wise heads”—and so, will vote No in September. In 2013, after several polls suggested that men are more likely than women to back independence, Scottish employment minister Jo Swinson (a No supporter) spoke of “a Braveheart tendency,” whereby men back independence because of their “macho view toward Scotland the brave.”

It is clear, too, that Yes leaders are embarrassed by the SNP’s earlier trumpeting of medieval battle history. They are quick to tout their affection for Merry England—and their hope for a relationship with London post-independence. Even the November 2013 launch of Scotland’s “white paper” on independence was, in the words of Scottish writer Alex Massie, marked by a “lack of drama—the merciful absence of bagpipes-and-Braveheart-bulls–t.” More than anything, the Bannockburn commemoration—which included a choreographed battle re-enactment—put the SNP in a pickle; the event was too important for leader Salmond not to attend, but his presence was subdued.

“The film has influenced politics,” agrees Scottish actress Mhairi Calvey, who played young Murron MacClannough in the movie. Speaking in London, she discusses the defining role that Braveheart has played in her life, from her casting at age six to her ongoing role as a Braveheart representative at Scottish cultural events. As for her politics? In a barely Scottish lilt, she will only say that “Scottish people are passionate [and] will choose to do what’s right in the long run.”

In the meantime, one unlikely person has been left untouched by this Braveheart-tinged wrangling: Queen Elizabeth II. Although the film features Scots rising up against the Crown, Yes supporters have not embraced the theme; they say an independent Scotland will retain the Queen as head of state. Even Salmond—who once eagerly channelled William Wallace—now expresses his “undiminished” affection for “Elizabeth, Queen of Scots.”