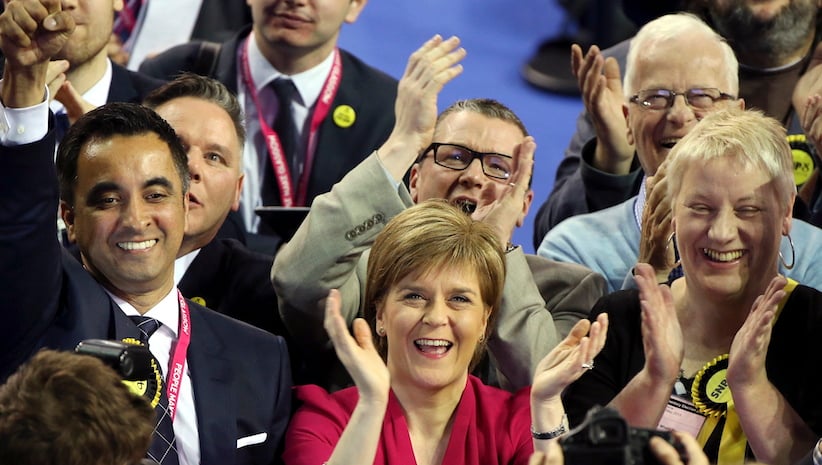 GLASGOW, Scotland – Just seven months after Scotland’s pro-independence movement failed in a referendum to break up the 308-year-old political union with England, the Scottish National Party has overturned decades of Labour Party dominance by securing a record-breaking share of the vote.

The SNP took 56 out of the 59 U.K. parliamentary seats in Scotland. Some of Britain’s most experienced Labour politicians lost their seats, including former Shadow Foreign Secretary Douglas Alexander, who was beaten by a 20-year-old Glasgow University politics student.

Political novice Mhairi Black became the youngest member of the British Parliament since 1667 when she captured the Paisley and Renfrewshire South constituency from the Alexander.

Throughout Scotland, the vote for change – and for a party that favours independence – was overwhelming. The SNP will now become the third largest party in the U.K. parliament – an ironic position for a party that wants to break of from the United Kingdom.

The SNP is also staunchly opposed to the austerity program imposed by the ruling Conservatives, and seeks the removal of the Trident nuclear fleet from Scottish waters.

Jim Murphy, leader of the Labour Party in Scotland, lost the Renfrewshire East seat he had held for 20 years to Kirsten Oswald, a human resources professional who only joined the SNP 11 months ago.

One of the most dramatic results of the election was the loss of the Kirkcaldy and Cowdenbeath constituency which had been under the control of Labour for more than 80 years. Until recently the seat of former Prime Minister Gordon Brown, who enjoyed a majority of 23,000, it was taken by the SNP’s Roger Mullin by a margin of almost 10,000 votes.

SNP leader Nicola Sturgeon said the election had been a great result for the party, which has seen membership numbers rise from 25,000 to more than 105,000 in six months.

“The tectonic plates of Scottish politics have clearly shifted and what we have seen is a historic shift in Scottish political opinion. It hasn’t happened overnight, and not even in the last seven months since the referendum,” she said. “Labour has been losing the trust of the people of Scotland over several years.”

Five years ago, in the 2010 election, the SNP won only six seats and secured just 20 per cent of the vote. Now, with 56 seats and more than a 50 per cent share of votes cast, the party believes it is in a position to push Scottish issues to the forefront of British politics.

“The result of this election has proved that even if Labour had won every single seat in Scotland they would still not have had enough to beat the Conservatives,” said Alan Pollock, 49, an SNP volunteer from the Glasgow area.

“For years they have said that only Labour can stand up to the Tories but if they can’t convince enough English voters to back them it doesn’t matter what we do. This time we have called their bluff and voted for a party that will stick up for Scotland. Now Westminster will have to sit up and take notice of what we have to say.”?

As seat after seat fell to the nationalist advance, supporters who had gathered for an election night party in the local campaign headquarters in Helensburgh near Glasgow clapped and cheered each result.

“We knew we were doing well, especially as none of the other parties even bothered to have representatives outside the polling stations all day,” said Pollock.

“The Tories, who have the campaign office across the road, even shut up shop and went home two hours before the polls closed.”

Among the SNP politicians aiming to shake up the Westminster establishment is former First Minister Alex Salmond. He resigned last September after losing the independence referendum but is now making a political comeback after winning a seat in the British Parliament with a majority of 8,000 votes.

“It’s a very positive vote from an electorate that has been energized and electrified by the referendum process,” Salmond said of the SNP performance. “We are not the same country as we were a year ago.”