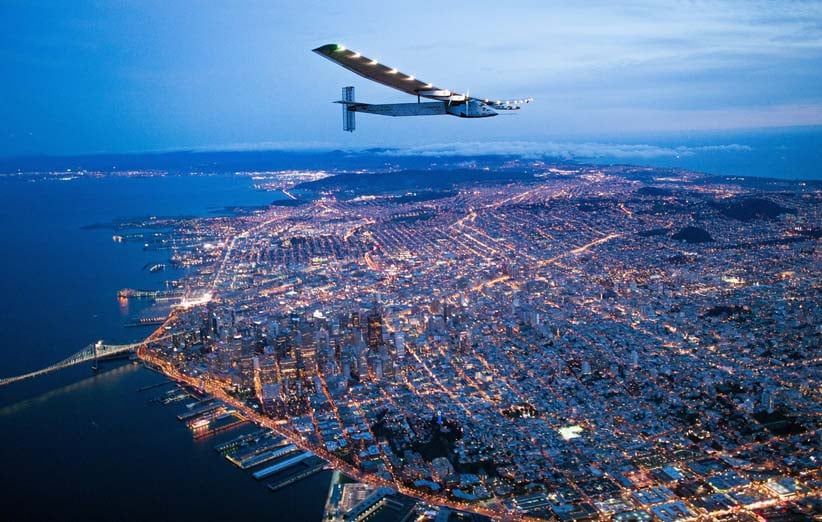 Solar Impulse 2, which is attempting to circumnavigate the globe to promote clean energy and the spirit of innovation, arrived from Hawaii after a three-day journey across the Pacific Ocean. (Noah Berger, AP)

CAIRO — An experimental solar-powered airplane took off from Cairo for Abu Dhabi early Sunday on the last leg of its globe-circling voyage, mission organizers said.

The Mission Control Center tweeted that the Solar Impulse 2 is expected to land in Abu Dhabi after a 48-hour flight. Mission Control said it had identified a weather window that could allow the plane to overcome the challenging high temperatures across Saudi Arabia.

“Just took off from Cairo to achieve the 1st round-the-world solar flight. A dream I have since 1999,” pilot Bertrand Piccard tweeted after Solar Impulse 2 was airborne.

The solar plane had arrived in Cairo on July 13 after a flight from Seville, Spain. The aircraft landed in Seville on June 23 after an unprecedented three-day flight across the Atlantic.

The around-the-world voyage began in March 2015 in Abu Dhabi in the United Arab Emirates.

The wings of Solar Impulse 2, which stretch wider than those of a Boeing 747, are equipped with 17,000 solar cells that power propellers and charge batteries. The plane runs on stored energy at night.

Ideal flight speed is about 45.06 kph (28 mph), although that can double during the day when the sun’s rays are strongest.

The solar project, which is estimated to cost more than $100 million, began in 2002 to highlight the importance of renewable energy and the spirit of innovation.