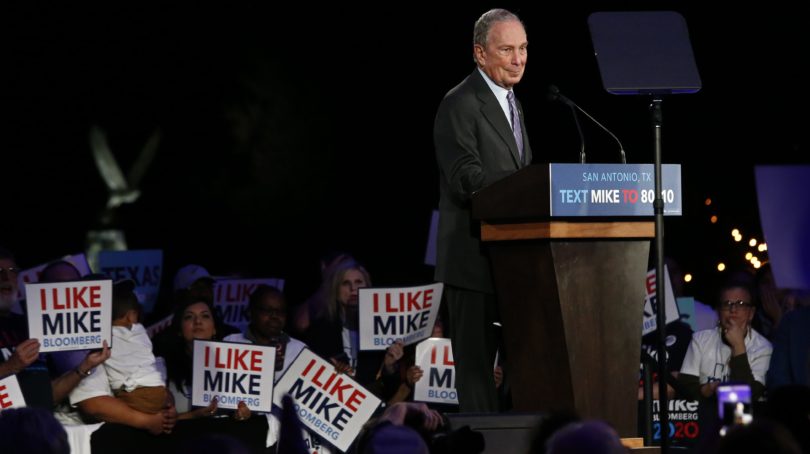 Coca-Cola blew at least $34 million on the famously shambolic launch of new Coke in the mid-1980s. It could have been twice that amount. Mike Bloomberg has plunged more than $500 million into his botched self-product launch. At least the too-sweet soda pop could claim it provided a few million unsatisfied Americans with empty calories.

Bloomberg 2020’s gassy slogan—“Mike will get it done”—proved true on Super Tuesday, but only 7,700 kilometres southwest of the U.S. mainland in American Samoa, his lone victory. To snag four delegates there, on a night when 1,357 were at stake, the multibillionaire hired seven full-time staff in a South Pacific territory normally undisturbed by national campaigners. Those seven staff herded 175 votes their candidate’s way (which was enough Samoans to win handily).

As Bloomberg’s business successes (and bank account) have shown, the $61-billion man knows how to scale up. He rented and staffed six field offices in Minnesota, while Bernie Sanders had one and Joe Biden zero, and dumped $10 million into ads there. The result? Biden won, on the strength of former rival (and newfound endorser) Amy Klobuchar’s volunteer army, while Bloomberg struggled to surpass 10 per cent and may or may not score a single Minnesota delegate.

In most other places, he finished a dismal third behind a resurgent Biden and Sanders. He underperformed expectations and polls in several key states, falling below the 15 per cent threshold for statewide delegates in big states like Virginia and North Carolina. His aides said Bloomberg would “reassess” his campaign on Wednesday. A mogul who made his cash mountain on data-driven decisions presumably knows what to do at the end of a three-month, woebegone investment. [UPDATE: On Wednesday morning, Bloomberg cut his vast losses and endorsed his “friend and a great American, Joe Biden.”]

Bloomberg took out a half-page ad in this country’s newspapers on Tuesday morning (for Democrats Abroad), giving Canadians a mere hint of the TV and radio bombardment he has unleashed south of the border. His regional ad buys in Super Tuesday states alone have passed $200 million, 15 times what Sanders has spent. This has somehow made him more ubiquitous on the airwaves than the Geico gecko. The insurer’s famed ad blitzes have helped it chew into more established insurer’s market share—but the CGI gecko never had to overcome dismal debate performance, a history endorsing disproportionate police enforcement against minorities and a history of misogynistic behaviour.

The Democratic debate in Nevada was one of Bloomberg’s first major experiences with non-paid media, and Elizabeth Warren disembowelled the poor, poor plutocrat, and his own shiftless performance did him few favours. The credible achievements of Bloomberg’s mayoral record were overshadowed by his embrace of stop-and-frisk policing and the African-American community’s long memory of it, as evidenced last weekend by several congregants at a Selma, Ala., church turning their backs to him as he spoke from the pulpit. News reports, meanwhile, exhumed past accusations of sexist remarks and sexual harassment in his corporate life. Had Bloomberg won, America would have spent long months adjudicating how much less severe his misconduct was than rival billionaire Donald Trump’s.

Bloomberg’s events have been well catered—extravagant buffet spreads with offerings like quiche, BBQ sliders and often free booze—but not so well attended. A roving reporter who attended several his California gatherings had trouble finding anybody to talk to who wasn’t paid campaign staff or wary of attaching their name to an interest in Bloomberg.

One of Bloomberg’s key arguments was that this self-funded executive could uniquely boast the resources to defeat Trump. That’s an ahistorical claim. You need the power of a billionaire to defeat a billionaire? In 2016, Hillary Clinton outspent Trump by nearly a two-to-one margin, and behold the last three years of that result.

Bloomberg’s brief window of opportunity, a few weeks ago, came when Biden was faltering in early contests and the ex-mayor had yet to show his weaknesses to the American public. To have a fighting chance, Bloomberg needed to become the top moderate challenger to Sanders’ lefty revolution.

But then the South Carolina victory resuscitated ol’ Joe, and endorsements by Pete Buttigieg, Amy Klobuchar and Beto O’Rourke made him undisputed king of the anti-Sanders vote. Bloomberg’s vote shares melted away as Tuesday night crept into Wednesday morning, because early votes were counted at the start of the night and election-day returns seemingly tilted toward Biden.

Almost any normal candidate would bow out after such a tumble. Bloomberg didn’t have to, since there was no worry his finances drying up after lousy results. He’d committed $7 million for ads in states whose primaries are forthcoming—and that’s just spending for Wednesday and Thursday. Shame and strategy were the brakes on his continued ambition, and strategy may have the edge, as he’d said his overarching goal is to defeat Trump, and was been unsparing in his criticism of Sanders, the candidate who wishes billionaires out of existence. Bloomberg, had he remained in the race, might have offered Sanders the best hope of finding a path to a victory at the Democratic convention. This is clearly a two-way race; Bloomberg could have afforded to stick around, but his party establishment couldn’t afford that.

Before this vanity project of sorts, he’s been renowned for pouring millions of dollars into advocacy on Democrat-friendly issues like gun control and climate change. That may remain a far better use of his largesse, and he’ll undoubtedly redirect much more money into the fight to topple Trump.

At Bloomberg’s first primary-night speech—he skipped the earlier contests like Iowa and New Hampshire to focus everything on Super Tuesday—“Judge Judy” Sheindlin introduced him, because current times are the weirdest times.

“We have to make sure it happens,” she said. “Because if we don’t, the rancour in this country will rip us apart.”

The TV judge wasn’t completely clear what “it” she believed should happen, lest rancour overtake America. After Bloomberg’s Local-TV-Station-Stimulus Tuesday, many Democrats were pretty sure what “it” referred to, and that it needed to happen sooner rather than later.