Adnan R. Khan: The politics of division lost badly in Turkey's biggest city, hinting at a new way forward: "Everything will be beautiful" 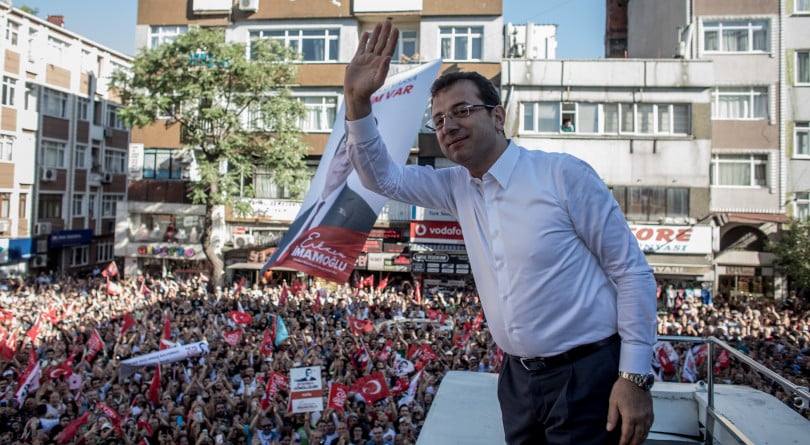 Imamoglu speaks at a rally during campaigning in the re-run of the Istanbul mayoral election on May 29, 2019 in Istanbul, Turkey (Chris McGrath/Getty Images )

In the July 2019 cover story of Maclean’s, Anne Kingston argues forcefully for more empathy in our politics. At first glance, it may sound quintessentially—or for some, painfully—Canadian: Let’s all be nice to each other and make the world a better place. But as Kingston notes, there is solid scientific evidence behind the power of goodness to heal, not only the human body and soul, but its body politic as well. And if the social and political fabric of our societies is being shredded by haters like Donald Trump and his ilk, the threads that will stitch it back to together could very well be love and compassion.

It may not always seem that way. Looking back at the U.S. election in 2016, the one that gave birth to the horrors of the Trump era, and more recently the European Parliamentary elections last month, where equally grotesque populist parties prevailed in places like Italy and Poland, it seems the most effective campaign strategy these days is the one that disparages and divides.

But that is not true everywhere. There are pockets of resistance, sometimes in the most unlikely of places.

READ MORE: The world is broken—and human kindness is the only solution

Last Sunday, voters in Istanbul, gave the world its first taste of what a message of compassion can accomplish. In a stunning reversal of fortune for the ruling AK Party and its polarizing leader, Recep Tayyip Erdogan, the opposition Republican People’s Party candidate, Ekrem Imamoglu, secured the mayoralty of Turkey’s economic powerhouse and largest city. And not just by a slim margin. When the counting was done, the gap between the AK Party candidate, Binali Ylidirim, and Imamoglu was nearly 10 per cent—more than 800,000 votes.

This comes after the first municipal election at the end of March ended in nearly a dead heat, with Imamoglu claiming victory by less than 20,000 votes, leading to a recount and ultimately a controversial decision by Turkey’s Supreme Election Board to redo the election.

After that decision, Imamoglu, at 49 one of the youngest political leaders in Turkey, could have opted for what most Turkish politicians opt for in the face of a perceived injustice: protest. It would have been the easy road. People were angry. Millions in Istanbul felt their votes had been stolen and were ready to take to the streets.

Instead, he opted for something no one else has tried over the 17 years of AK Party rule: compassion.

“It was such refreshing change,” Sezer Koclu, a geologist and LGBTQ rights activist told me. “Instead of angry old men yelling at each other, we had this young guy calmly telling us to love and respect each other.”

Imamoglu’s election campaign boiled down to a single message: Enough with fear and division. His campaign slogan, “Hersey guzel olacak“, meaning “Everything will be beautiful”, may have sounded hokey, but it found its moment at a time when Turkey faces a deepening economic crisis, when its foreign policy has left it isolated and alone and when its leaders cling desperately to the populist notion of external threats angling to destroy the country.

That message of fear worked for years but appears now to have grown old and worn. And ironically, the division it has sown is now infecting the AK Party itself.

The decision to contest the election results in Istanbul at the end of March was not universally accepted by party members. Some feared, rightly, that such a move would alienate voters and give the CHP an edge in a rerun election. Others worried Erdogan’s fear of losing Istanbul was pushing him further along the authoritarian path while his supporters countered that it wasn’t Erdogan who was the problem but the AK Party bureaucracy in Istanbul.

Fissures inside the party are threatening to tear it apart. Analysts in Turkey argue that if it can’t find a more unifying message, the Istanbul election results will only be the beginning of its decline. Indeed, during the nationwide municipal elections in March, the AK Party lost in most major cities. It has also failed to appeal to youth voters. And in a country with a young and rapidly urbanizing population, that does not bode well for the future.

“If the AK Party now tries to play spoiler in Istanbul by blocking the CHP from implementing its political agenda, it will only alienate voters further,” Ilter Turan, Professor Emeritus of Political Science at Istanbul’s Bilgi University, said. “It has to realize that Turks, especially young people, are tired of the politics of division. Imamoglu has bridged the gap between religious conservatives and secularists, something Erdogan has not been able to do. He speaks the language of urban populations where people from a variety of economic, ethnic and ideological backgrounds have no choice but to find a way to live together.”

In that sense, Imamoglu was inevitable. It’s perhaps inevitable too that divisive politics around the world will stoke the flames of a compassionate alternative. As Anne Kingston points out, cruel policies in countries like the U.K. and the U.S. have given rise to movements calling for more empathetic responses to the problems our world faces. And now we’ve seen, in arguably the most unexpected of places, that people are ready to embrace those responses.