Adnan R. Khan: Trump seemed to finally grasp what everyone in Afghanistan already knew: The Taliban can't be trusted and are now intertwined with al Qaeda. 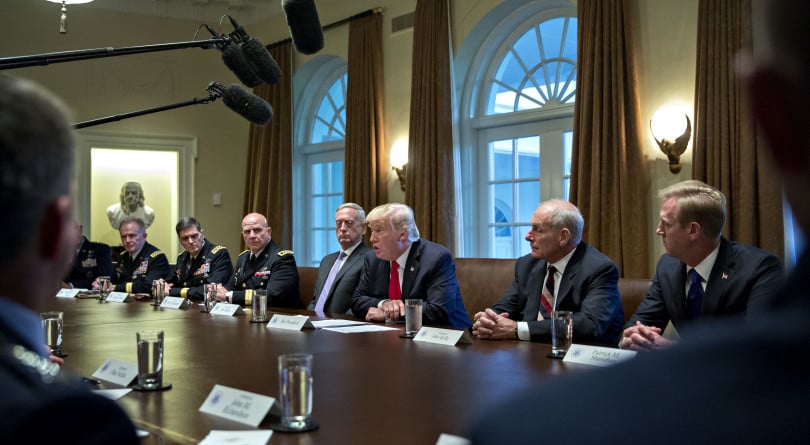 Trump attends a briefing with senior military leaders in the Cabinet Room of the White House on Oct. 5, 2017 (Andrew Harrer-Pool/Getty Images)

Last year, when I met with Ahmad Massoud, the son of Afghanistan’s national hero, Ahmad Shah Massoud, I asked him what he thought about the American-led peace negotiations with the Taliban. His response was telling, and surprisingly perceptive for the then 29-year old political neophyte:

“The Taliban have not stepped down from their demands,” he said. “If they agree to the basic demands of the Afghan people—that my daughter can vote, my mother can vote, that they have rights, that every religion is allowed to be practiced, if they recognize the importance of the parliament and political parties—then why not, come. But they must respect this system. We fought and we sacrificed thousands of lives for this.”

At that time, Massoud, bearing a striking resemblance to a young version of his father, had only recently arrived back in his native country, after years of exile and study in the U.K. Being back was still growing on him. He was, not surprisingly, under immense pressure to take up the mantle of his war-hero father.

Like many exiled Afghans, he was torn between the rhythms of the life he had known in the west, where conflicts are resolved peacefully in the courts and the threat of violence—at least of the martial variety—is virtually non-existent, and the demands of life in Afghanistan, a nation caught in a constant swirl of uncertainty where the recourse to armed conflict is all too often the first, and only, option.

Massoud insisted his role in Afghanistan would not be to fill his father’s military shoes. He was not returning as a Massoud the Commander, he insisted, but Massoud the Unifier.

READ MORE: The next, best hope for Afghanistan

How quickly things can change. Over the year since we last met, unification has evolved from bridging Afghanistan’s political and ethnic divides, “overcoming,” Massoud told me, “the divisions that have the potential to break the spirit of Afghanistan” to uniting against the return of the Taliban.

It’s a rallying cry that has gained currency in Afghanistan over the past year, fuelled by a U.S.-led peace process that excludes Afghans from the negotiating table. But on Sunday, that process imploded after U.S. President Donald Trump appeared to suddenly wake up to what the U.S. was doing, and with whom it was doing it.

“Unbeknownst to almost everyone, the major Taliban leaders and, separately, the President of Afghanistan, were going to secretly meet with me at Camp David on Sunday,” he wrote in a series of Tweets. “They were coming to the United States tonight. Unfortunately, in order to build false leverage, they admitted to an attack in Kabul that killed one of our great great soldiers, and 11 other people. I immediately cancelled the meeting and called off peace negotiations. What kind of people would kill so many in order to seemingly strengthen their bargaining position? They didn’t, they only made it worse! If they cannot agree to a ceasefire during these very important peace talks, and would even kill 12 innocent people, then they probably don’t have the power to negotiate a meaningful agreement. How many more decades are they willing to fight?”

The oddity was not the content of the tweets, except for the revelation of a planned meeting at Camp David, which took everyone by surprise. It was that Afghans had been warning the U.S. for months that negotiating with the Taliban in the absence of a ceasefire was giving the militants too much. The Taliban had stepped up their attacks during the course of the negotiations. The attack on Sept. 5 that had irked Trump so much was only the latest, and not even the most devastating. So why was Trump so affronted now?

Perhaps he had finally read an intelligence briefing on Afghanistan—a longshot admittedly, but one can dream. If he had, he would have learned what my Afghan sources have been telling me for weeks: Afghans are arming themselves for a return to civil war if the Taliban return to power.

Nobody expects the militant group to suddenly transform into democrats and join the political system. That was what Massoud alluded to when I spoke with him again over the telephone last week: He was unifying his people to resist a return of the Taliban.

Why did it take Trump so long to wake up to this fact? The Taliban have shown no signs that they have abandoned their goal of re-establishing their Afghan Emirate. Indeed, throughout the negotiations, they insisted that even after a deal was reached, they would still refer to themselves as the government of the Islamic Emirate of Afghanistan.

Indeed, Shaharzad Akbar, the newly-appointed chairperson of the Afghanistan Independent Human Rights Commission, told me last month that a meeting she attended in July in Doha, Qatar between Taliban officials and members of the Afghan government and civil society left her feeling unsettled.

“It’s not just that the Taliban acted as if they were the winners in the war,” she said, “it was that they seemed even more uncompromising in their interpretation of Islam, more Salafi. I walked away thinking that the international community needs to express their red lines more clearly. Will they continue to send money to Afghanistan if women are being stoned? The Canadian ambassador told me that he would make those lines clear. The EU has expressed the same sentiment. But the U.S. doesn’t care. They say it’s an internal Afghan matter.”

The possibility that the Taliban have gone more Salafi, the austere form of Islam practiced by al Qaeda, undermines the idea that they would completely cut their ties to the group, a key U.S. demand in the negotiations. The process of transformation, from Islamists following the more moderate Hanafi school of Islamic jurisprudence in the 1990s to a group that now regularly carries out suicide attacks (a feature of Salafi-jihadists), was detectable even a decade ago when I gained access to areas in Pakistan that had fallen under the control of the Taliban’s Pakistani affiliate.

“While there may indeed be ‘moderate’ or ‘nationalist’ Taliban,” I wrote at the time, after meeting with militants and their senior commanders, “the movement itself has become deeply, and perhaps irrevocably, intertwined with the al Qaeda-inspired global jihadist movement—and is now better described as Talqaeda.”

The conjunction was admittedly crude in retrospect, but to the point. Since then, the Taliban have fallen under the sway of the al Qaeda-aligned Haqqani network. Sirajuddin Haqqani was elevated to deputy leader of the Afghan Taliban in 2105 but most experts believe he is its de facto leader, at least in terms of military operations.

The question then is: Who exactly were the Americans negotiating with? Was it the Taliban or the Haqqanis?

Ronald Neumann, who served as the American ambassador to Afghanistan from 2005 to 2007, told me last week that his sources identified Haqqani representatives at the peace negotiations throughout the process.

So as it turns out, Afghans—surprise, surprise—were right all along: The Americans, in their rush to the exit their longest war, were on the very cusp of making a deal not only with the Taliban but, for all intents and purposes, with al Qaeda. Afghan leaders like Massoud, well aware of what would happen next, were preparing for the inevitable fallout—civil war.

Did Trump inadvertently dodge a bullet? Too many questions still hang over the now-defunct peace process to conclude that his motivation was an understanding of the complexities on the ground. There is still the possibility that he will re-start the negotiations. But unless they include Afghans, and take a harder line on the Taliban’s continued use of violence as leverage, the outcome will be just as disastrous.