Emmanuel Macron is not exactly popular, but no one will admit to voting for Marine Le Pen in Saint-Pierre and Miquelon 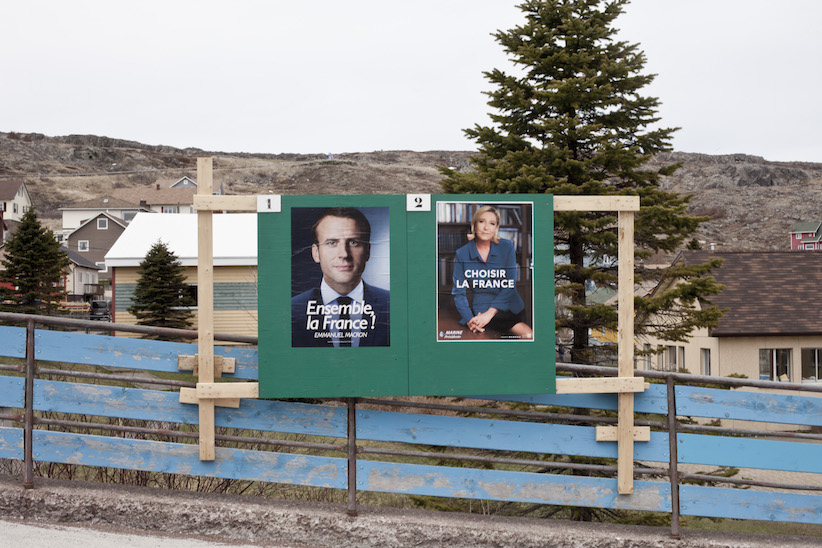 Election signs in Saint-Pierre and Miquelon, a French enclave off the southern coast of Newfoundland (Photograph by Nick Kohler)

Saint-Pierre and Miquelon is a rocky, scrub-covered archipelago of French territory off the southern coast of Newfoundland, the last remnant of French colonialism in North America. It is picturesque yet forbidding and remote, on the precipice of the cold north Atlantic, with a history of shipwrecks and hard living. In the late 1880s, after a night of heavy drinking, a Frenchman by the name of Néel killed and then cut into pieces one of his fellow fishermen. Upon his conviction, the French citizens of Saint-Pierre faced the dilemma of how to carry out the sentence: he was their first murderer, and they did not have the guillotine mandated by French law for capital punishments. Once they got one, nobody could face the prospect of using it, so that authorities are said to have recruited a thief in the village jail, promising him freedom.

Once he’d carried out the deed, no one in town would so much as sell their executioner a baguette, and he was forced to leave the archipelago immediately.

On Sunday afternoon, two men walking down a narrow Saint-Pierre street would not slow down. Had they heard the news, had they heard who’d won the presidential elections?

“We’re too disappointed, we’re not interested in talking about it,” cried one of the men, middle-aged with a lined face, over his shoulder. The younger man, in a hoody and sunglasses—in the steel-grey atmosphere of late afternoon in the north Atlantic—turned to his cohort with a bemused expression. Were they supporters of Marine Le Pen? They both hesitated. “Yes, we’d have liked to have seen Le Pen win,” the older man said. He’d allowed an ironical twinkle to enter his eyes. “But I will give you the news—Macron won, 65 per cent to 35 per cent.” It was as near as any Saint-Pierrais had come to admitting to a Le Pen vote.

Though Emmanuel Macron, the 39-year-old wunderkind founder of France’s centrist En Marche! party, took 63.29 per cent of ballots cast in Saint-Pierre and Miquelon, he was a less-than-popular candidate. Le Pen, leader of the far-right Front National, meanwhile took 36.71 per cent of the vote—even if there are few if any immigrants, as yet no terrorist attacks, and little to no unemployment. On the islands, Le Pen was pretty much a contender.

The cod that once supported this place as a fishing community have all but vanished, but the old circumstances that prevailed at the time of Néel’s execution remain: dependence on the largesse of France combined with the challenges of upholding the mother country’s exacting standards in a ruggedly exotic, intensely quiet place. Today almost half the population of 6,000 works for the government that also manages and services it. A reliance on big government helps explain why so many here voted for Jean-Luc Mélenchon, the far-left candidate, in the first round of voting two weeks ago. More difficult is the question of why so many voted then, and today, for Le Pen.

Sitting on a bench further down toward the sea, a 40-year-old man with greased hair parted on the right and wearing a bomber jacket, nearly spat. “It’s no good—the French really closed their eyes on this one,” he said. “They’re real sheep. Macron will put us in the shit like the others.” He was referring to the two past presidents, the intensely unpopular Francois Hollande, and Nicolas Sarkozy. The man—a baker who makes ends meet by moonlighting as a bouncer at a local bar—would not give his name or say how he had voted. “My vote is my vote, and we don’t talk about that,” he said.

And yet he made his sympathies clear. The French economy has grown rotten—”you’re either rich or poor these days, there’s nothing down the middle”—and Le Pen’s plan would have gone a long way to solving all that by focusing on France and the French to the exclusion of outsiders they cannot afford. “She would have closed the borders, got us out of the Euro, re-launched the economy—she understood how to do that, no one else did.” He shook his head. “If there was ever a time we needed change, it’s now,” he said.

Such Trump-like utterances sound odd in a village where the houses are candy-coloured in the same way as those in the Côte d’Azur, but where they climb up a slope of shattered boulders and the sea is like granite. It seems reasonable to think that France’s far-flung outre-mer jurisdictions (Saint-Pierre and Miquelon, a self-governing “overseas collectivity,” is one of a handful around the world) might be outward-looking places—parts of the globe of globalism, relatively immune from the menace of international terrorism—and so less inclined to identify with Le Pen’s anti-globalization, France-first, safe-borders message. De Gaulle called them the “shards of empire,” and in some ways they embody the waning of French power, a humility-inducing soporific.

Saint-Pierre and Miquelon embraces a kind of mid-Atlantic compromise between Europe and North America. Pétanque, the French lawn bowling game, is played on a Saturday with a cigarette hanging from the mouth—but so is hockey, complete with the gladiatorial goalie’s outfit. French is spoken in a way that sounds European to the Quebecois and Quebecois to Europeans. Imported gens d’armes patrol the streets, the wine is cheap, the electrical outlets take round pegs, but the butter is from Ontario, Labatt Blue is available at the bar and Halifax and St. John’s are considered big cities. More local young people now opt to study in Canada rather than France—and though many do not return, there are more kids playing in the streets here than in towns of similar size in Newfoundland, just an hour away by ferry.

Yet the French firebrand Le Pen did about as well here as a lot of places in mainland France. She also outperformed national polling in other outre-mer jurisdictions, including French Guiana (now undergoing a worrying crime wave linked to illegal immigration from Brazil), Réunion, in the Indian Ocean, and French Polynesia (where she took 41.61 per cent, though more than half of eligible voters abstained). “Diaspora communities are always more nationalist than the homeland,” says Randall Hansen, director of the Centre for European, Russian, and Eurasian Studies at the Munk School of Global Affairs. “While not diasporas, Saint-Pierre and Miquelon are cut off and have to assert their Frenchness in a way that, say, the 16th arrondissement, does not. This leads to nationalism.”

This was not always the case. In France’s 2002 presidential elections, during the first round of voting, when news coverage from Paris began to suggest that Jean-Marie Le Pen—Marine’s father—might very well face off against Jacques Chirac, the incumbent, in a runoff, Saint-Pierrais swamped polling stations, desperate to vote against the Front National.

Episodes like this prompted a change in voting procedure, and France’s overseas jurisdictions, together with French citizens living abroad, now cast their ballots the day before mainland France. That perhaps accounts for a sense of anti-climax in monitoring the outcome of the election in Saint-Pierre. The bartender at the Bar La Chauve Souris, or Bat Bar, said that rather than turn the televisions to the election coverage as results were to roll in on Sunday afternoon, they’d be watching the Marseille-Nice soccer match. (“There are some things that are more important than elections,” he said).

If the prospect of a Le Pen victory got people to the polls in 2002, Saint-Pierre felt empty on Saturday—school was out for the Easter holidays, and many families were travelling (the place was like a Potemkin village with passably good French restaurants). This time there was only disgust. “I’m anti-extreme! We beat them in 1945, the extremists! Hitler was an extremist,” said Gerard Urtizberea, a 68-year-old man who exited the polling station bare-chested under his half-zipped blue training jacket, and who described himself as a retired sailor. His face was as craggy as the rocks down at the shoreline, and when asked what he thought about Macron he shrugged in a way only a Frenchman can, throwing his shoulders up and exhaling lustily. It was enough that Macron was not Le Pen. “Many will choose Macron,” says a 59-year-old woman who called herself Marie-Christine, “because they cannot choose otherwise.”

It was futile work finding anyone who’d confess to voting Le Pen. Yet nearly a quarter of Saint-Pierre and Miquelon residents who’d cast ballots two weeks before did so in support of Le Pen—where were they now? “They live on Miquelon,” said a man wearing a jaunty scarf, referring to the larger, but less-populated, island north of Saint-Pierre: “It’s well known.”

That willingness to scapegoat the will of the people, or at least a good contingent of them—evidenced in the story of Néel’s executioner, forced to flee the islands after carrying out his grisly public work—continues now. And that is nowhere truer than in the local figure of Roger Rode, departmental secretary to the Front National, and among the few—perhaps the only—Saint-Pierrais who is actually eager to admit his support of Le Pen. It’s not that the community of Saint Pierre seeks to banish Rode, a widower whose closely cropped moustache and wry smile suggests an aging, slightly bumbling Errol Flynn. On the contrary, locals tend to speak of him as a well-meaning, if misguided, eccentric.

Those who vote for Le Pen in Saint-Pierre must be only too happy to let Rode take the collective credit for all the ballots here that go to the Front National. In a video available for viewing online, no less than Jean-Marie Le Pen, co-founder of the Front National, can be seen to thank Rode for his part in growing support for the party in Saint-Pierre and Miquelon (which Le Pen describes as “a far away and pretty windy place”).

Arriving at the polling station on Saturday morning, Rode was less enthusiastic about speaking to the press. “I’m suspicious of journalists,” he said, “they distort what I say.” Yet he described Jean-Marie as “charmant,” with a wicked sense of humour, and Marine as “charmante, like her father.” He explained Marine’s growing support: “People have had it with the status quo, that’s it!” He raised the spectre of terrorism, agreeing that there has been none in Saint-Pierre so far—”but we shouldn’t wait for them!”

Then Rode agreed to invite a journalist to watch the results at his home the following day. “It will be just me and my dog,” he said. “If Marine wins we’ll open some Champagne. If she loses I don’t speak to you, I’ll be too disappointed” He gave his address. It was an old motel, grown decrepit, with a pile of old televisions stacked on the stoop at the front door. There was an old rusted anchor weighing its indent into the grass in the lawn and a poster of Le Pen in the front window: “Choisir La France,” it read. But Rode was not home. The results of the vote had arrived, like a thunderclap, at 4 p.m. Saint-Pierre time. Reached by phone, Rode said: “I am disappointed, but I am not destroyed.”