The Hamburg G20: What could possibly go wrong?

With Trump, Putin and Merkel at the table, consensus isn't likely. This will be chess, played over a shark tank. 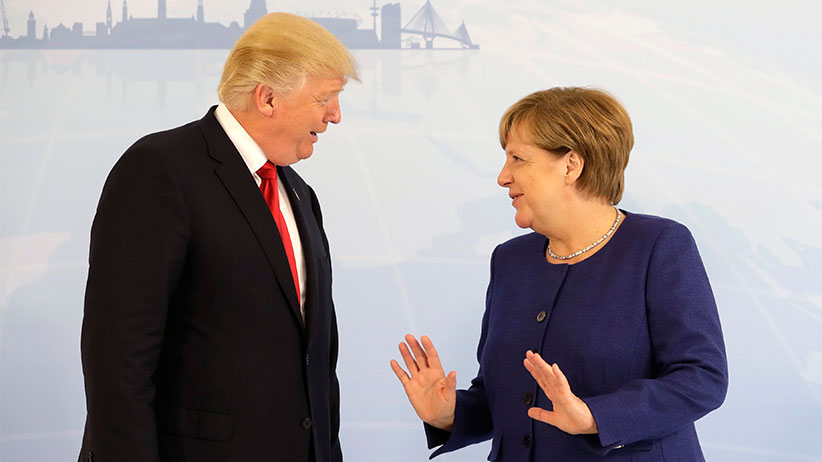 In Germany, all fingers are crossed for a harmonious G20 meeting on Friday and Saturday in Hamburg. Even Angela Merkel’s staff are leaking hopeful messages of bonne entente. The Financial Times has found “a German government official” who says, surely differences can be artfully fudged: “A good option would be to focus the summit declaration on issues with wide support, such as fighting terrorism…. Less space could then be devoted to the contentious issues of trade and climate change, using ambiguous language to allow all parties to claim victories, he says.”

Ambiguous language on climate change! This sounds oddly like what Justin Trudeau was accused of seeking a month ago, when Der Spiegel said he’d asked Merkel, in a phone conversation, “what would be wrong with simply striking all mentions of the Paris Agreement from the planned G-20 statement on climate.”

The Prime Minister’s Office contested Der Spiegel‘s version of events, but (a) Der Spiegel conspicuously didn’t retract any part of their account; (b) now here’s this German government official saying broadly the same thing Trudeau was said to have, er, said; and (c) here’s Trudeau himself, at his news conference last week, sounding for all the world like he’s still trying to figure out the angles. National Observer reporter Carl Meyer asked an admirably simple question—”What did you tell Angela Merkel?”—and Trudeau gave an interestingly complex answer.

“I told her that Canada continues to stand very strongly with the international community on the Paris Agreement,” Trudeau said, “that we truly believe that moving forward we have to stand strong.” That would have been a forceful way to end his answer. It’s not how he ended his answer. “I told her what it turned out President Trump had also said in public—that he was still interested in looking forward on moving clean energy, on environmental issues, but not within Paris.”

Hmm. A president who is still “interested in looking forward on moving” might be the stuff of ambiguous language that would allows parties to claim victories. Trudeau continued: “And I impressed upon her the importance of making sure that we all stood together. Including in the communiqué moving forward.”

So they must “all” stand together, “including in the communiqué,” including President Looking-Forward-On-Moving, Just Not Within Paris.

This is all interesting. I don’t think any of it gives us much indication how Friday and Saturday in Hamburg will turn out. Everyone tried hard to reach a consensus at the G7 in Paris, but it didn’t work. Days later, Trump announced he was abandoning his country’s Paris accord commitments. But sometimes Trump brings his cooperative game, as he did Thursday with his Warsaw speech, which criticized Russia mildly for “destabilizing” Ukraine and offered long-awaited support for NATO’s Article 5 doctrine of collective defence. So all could end well.

That’s probably not the way to bet it. To the extent there’s a Trump method of modern diplomacy, it’s that he’s hard on friends when he’s frustrated by enemies. North Korean ICBMs would frustrate any president. And climate change isn’t the only potential axis of disagreement: the G20 summit’s official agenda lists “migration and refugee flows” and “trade” among other topics. Trump’s Warsaw speech suggested he still sees open borders and free trade as signs of weakness. That was the “will-to-survive” portion of his remarks: “Do we have enough respect for our citizens to protect our borders? Do we have the desire and the courage to preserve our civilization in the face of those who would subvert and destroy it?”

Nor is the United States the only problematic player at the bigger, wilder G20 table. Vladimir Putin will be there, fresh from a profoundly unpredictable bilateral meeting with Trump in Hamburg. The Chinese will be there, and the Turks. China’s Xi Jinping is eager to advance his positioning as the world’s emergency backup leader, an attempt that will be likelier to succeed if the summit’s other participants decide to ignore China’s spectacularly awful human rights record.

The longer you look at it, the more the Hamburg summit looks like six-dimensional chess, played over a shark tank. Maybe it will go well! Stranger things have happened. The likeliest scenario is that everyone will walk into the room grimly determined to get along—and that they’ll leave it having failed to get along. The challenge for everyone in the room, the Canadian prime minister not least among them, will be to recognize the moment when consensus starts to collapse, and displaying some agility in knowing where to leap when it happens.