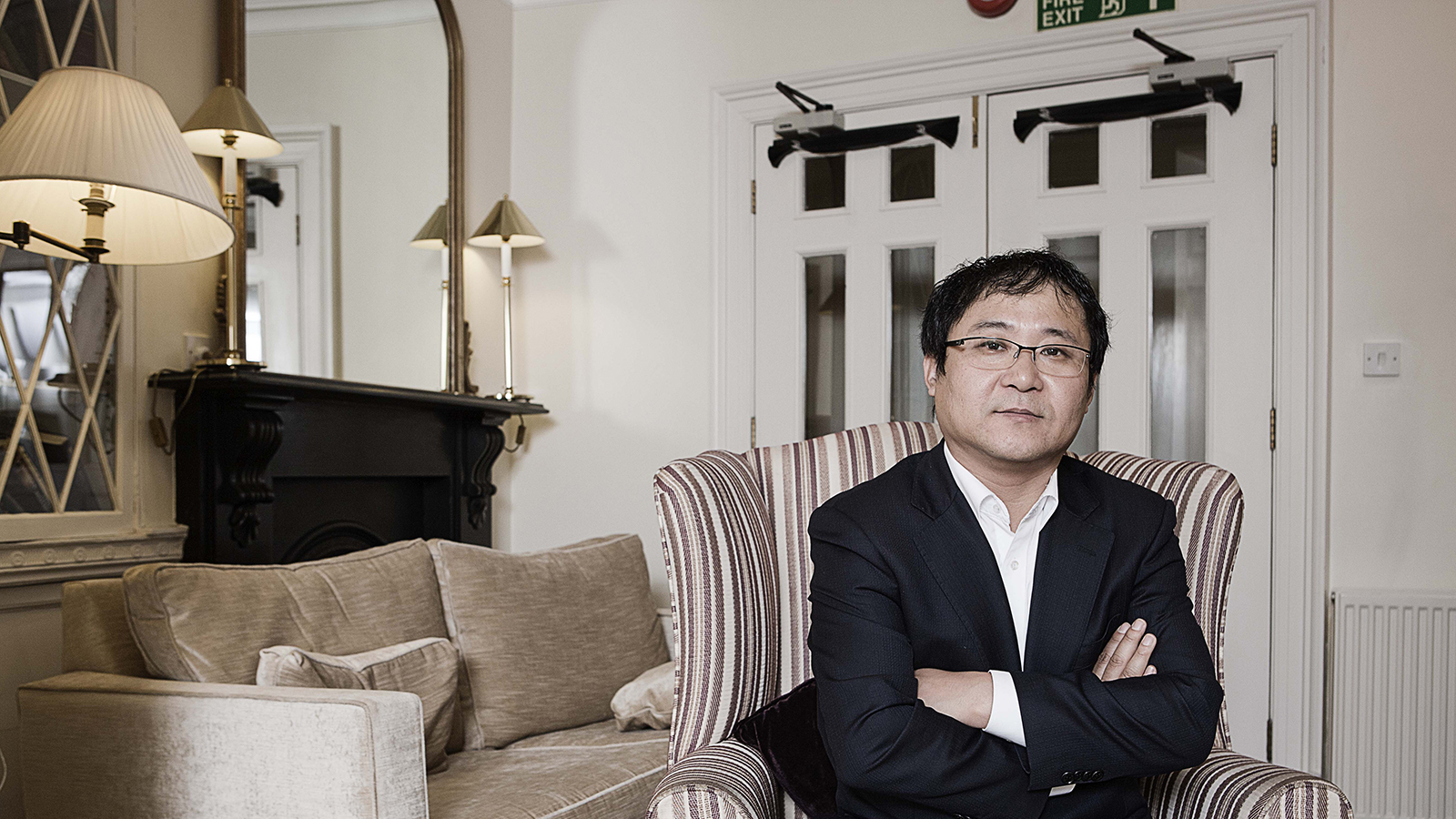 As a state-appointed poet laureate, Jang Jin Sung reached the pinnacle of elite life in North Korea. He spent his days writing epic poems for dictator Kim Jong Il—and overseeing inter-Korean espionage. In 1999, he joined a small clique who had spent time in private with the “Dear Leader,” who died in 2011 and was succeeded by his son Kim Jong Un. But before long, as Jang recounts in a remarkable new memoir, he was plagued with nagging doubts. In 2004, having committed a minor transgression deemed treasonous by the state, he fled, becoming one of North Korea’s highest-ranking defectors. Dear Leader is one part chronicle of courtly rule in Pyongyang, one part glimpse into the grim realities of life under Kim Jong Il and one part adventure tale, following Jang’s eventual escape through China and into South Korea. Today, he is editor-in-chief of New Focus International, a website reporting on North Korea.

Q: You started in the United Front department, which oversaw North Korea’s psychological warfare operations. What was your role?

A: North Korea is isolated. You are not allowed to read anything from outside. But the United Front department is, in part, a kind of counter-intelligence operational unit against South Korea. And it is thought that to formulate successful counter-policies, one needs to understand how South Korea works. I wasn’t able to go live in South Korea, but I was meant to live in the South Korean mind. We had access to South Korean TV, media, books, so that we could think on their wavelength.

Q: When you were in your 20s, you were ordered to produce an epic poem for Kim Jong Il.

A: Within the government there was a kind of institutional rivalry around epic poetry, which was Kim’s preferred vehicle of political propaganda. Different departments had their own poet laureates. But the United Front department had not been able to satisfy Kim Jong Il with an epic poem. When I was 27, the task fell to me. It was such a weighty thing. The theme for the poem, set by the party, was the notion that Kim Jong Il was the legitimate leader of the Koreans and that South Korea was an illegitimate government. I was meant to write my poem in a South Korean style. That gave me freedom and leeway; it broke so many rules but was still in the framework. Kim signed my poem into law, and that means everything in North Korea: the Dear Leader, the Supreme Leader. There is one celebrity in North Korea, and that is Kim.

Q: At one point, even though foreign books are so restricted, you got hold of the Collected Works of Lord Byron. What was that like?

A: In North Korean literature and culture, you have one protagonist and one story. Everything else is a variation. When I read Byron for the first time, I thought, “These are like North Korean people! They have emotions like people I know, and their lives are like mine.” It was more real than any North Korean literature I had ever come across. I cried while reading it. It moved me that literature can actually reflect reality, as opposed to a “reality” set by the state. The poem I enjoyed most was called The Corsair, about a pirate falling in love. Before coming across Byron, I thought “dear” was a name for Kim Jong Il—a quality that was ascribed to him and that belonged to him. It was shocking to me that normal people could be “dear” or “great” or “beloved.”

Q: When you began reading South Korean literature and media, did you trust it?

A: It wasn’t a matter of trusting or not trusting. In my country, there was one narrative of the Supreme Leader, a unified single narrative. To see another narrative, many other narratives, that sounded more logical, reasoned and balanced, and eroded the truth of North Korea. I thought, “Wow, this is a fabrication.” It was instant.

Q: One of your jobs in Pyongyang was to help write Annals of the Kim Dynasty, the official history of the Kim rulers. What did this involve?

A: My own task was to amplify to perfection Kim’s role in the arts and culture of the nation, as a genius who is guiding the people through art. It is so, so wrong. What we wrote would become the truth of the nation. I was terrified by the burden, by my responsibility in holding up this lie. And because the goal of any art in North Korea is to reach as many people as possible, the book was edited for TV. Even today, it is broadcast almost every day, all the time.

Q: Kim Jong Il used to say, “I rule through literature and music.” What did that look like?

A: In most dictatorships, things are done by force. You are physically restricted in movement, action, expression. The cultural, psychological and emotional dictatorship has the same restrictions, but placed on the mind, so it defines the boundaries within which you can think, and the boundaries within which something is morally good. It’s not your conscience that sets that, it’s the state.

A: Kim Jong Il has the authority of a divinity, he is infallible. To be “admitted” literally means that you have been admitted into his divinity. You can never be wrong—unless Kim says you’re wrong.

Q: You were invited to a dinner with him. It was an elaborate affair that involved alcohol and flaming ice cream. What was it like to see Kim for the first time?

A: There was all this buildup. We had to get on and off different vehicles and go through different security procedures. I thought, “Wow, this is the centre of gravity.” And yet, when I saw him, it was terrifying and paralyzing. I thought, “Even my eyelash doesn’t belong to me, it belongs to him.” And, of course, I was involved in cultifying him. But even for me, one of the people who had created the myth, seeing Kim in person was . . . He wasn’t better than any of us. He wasn’t divine. He wasn’t powerful. He was just a man. To actually see the man was pathetic.

Q: You were living a privileged life in Pyongyang. The turning point came when you went to visit your hometown after 10 years away. Why did that affect you so much?

A: Having been admitted into Kim’s circle was the apex of possibility in North Korea. There is nothing greater than him. There was nothing more to do. So I started to look back. Going home, I saw that all of my memories of childhood, of family life . . . it was all destroyed. It was all just famine, poverty, wreckage, destruction. There was a state corpse division to collect the bodies of beggars who had died on the street. In the marketplace, by the train station, there was a woman selling a comforter filled not with cotton but with cigarette-butt ﬁlters. How desperate must someone be to do such a thing? Other people were selling water. And then I saw a public execution: a farmer executed for stealing rice. There was just destitution. My hometown was dead of feeling. The visit home shattered me. I was back down on Earth; oh, this is reality: my destroyed country.

Q: You fled North Korea after lending a South Korean book to your friend Hwang Young Min and it went missing. You left without telling your family. Have you made contact since?

A: When you say goodbye to someone, the least you can give them is the pain that they will never see you again. I just left without a word. The morning I left, I wore sunglasses to hide my tears. I still feel guilty for it. I lied to my family to the end. I have tried contacting them many times, through different channels. It has been impossible to get through.

Q: You and your friend set off on a treacherous trip to the Chinese border, but, even after crossing into China, you were pursued by police.

A: It was surprising. We thought the moment we crossed the river, we were free. This dictatorship pursued us not just across China, but until this moment. Even now, North Korea threatens me with assassinations. I have 24/7 close-proximity police protection. More than fear, it’s just really bothersome.

Q: You write that the security guards were present at your first date with your now-wife.

A: [Laughs] Yes. I couldn’t even have an affair without my bodyguards knowing. It’s only when North Korea falls that I can have an affair freely. Of course, there is fear. But my friend Young Min killed himself, jumped off a cliff [after being caught in China]; that’s the counterpoint to my fear. I have to keep going.

Q: You moved to South Korea a decade ago. What was the hardest adjustment to life there?

A: The most difficult thing was also the most wonderful thing. In North Korea, you can only do things you are ordered to do. When I came to South Korea, that crutch was gone. I thought: Oh s–t, what do I do with my time? How do I formulate the direction in which to take my life? It’s scary. But when I started to take those next steps, it was blissful. Ironically, North Korean state ideology is Juche, which means self-reliance. But it is not self-reliance, it is state reliance. Only after getting out of North Korea did I realize self-reliance meant relying on oneself.

Q: Kim Jong Il has been succeeded by Kim Jong Un.  Abroad, we hear about his friendship with Dennis Rodman and his strange haircuts. What do you think of the new Dear Leader?

A: Kim Jong Un is like a symbolic avatar of the Supreme Leader. I completely understand why the outside world sees him through this lens of the ridiculous. Of course, that hides a more sinister reality, but that is exactly what the fabrication of North Korea is. When you look at it from the outside, it’s absurd and ridiculous and funny. What else but to laugh? But in North Korea, you uphold it out of fear.