Maclean's archives: The Afghan leader on security, enforcing women’s rights—and sitting down with the Taliban 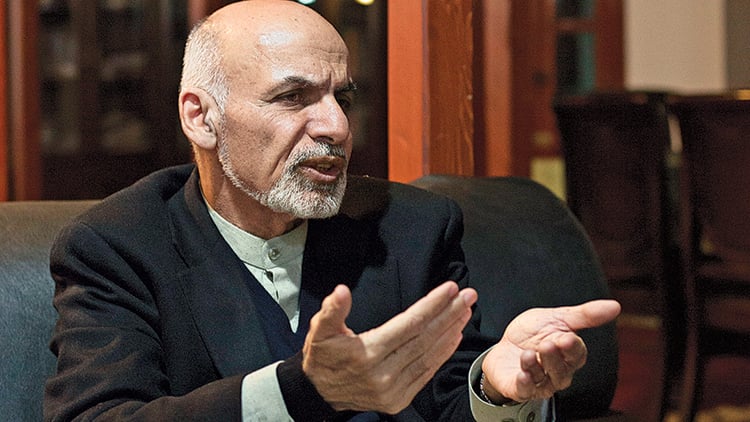 A former economic adviser to the World Bank in New York, Ashraf Ghani Ahmadzai returned to his native Afghanistan in 2001 after 24 years abroad, and served as the minister of finance in the Hamid Karzai government and, later, as chancellor of Kabul University. Ghani ran in the 2009 presidential election, finishing fourth. He is now a favourite in the upcoming April 5 presidential election.

Q: Why do you want to be president of Afghanistan?

A: Because I’m ready. Crisis for others is a source of despair. For me, it’s an opportunity to bring reform. I owe this country a debt I cannot repay.

Q: How can you succeed where President Karzai failed?

A: President Karzai was an accidental president. There was no paradigm for the conditions he faced, because no one could have imagined 9/11. He had to improvise under very difficult conditions to hold this country together. We now have a platform for change and the country is ready for transformation.

Q: Explain how that transformation happens.

A: The key demand for me from the public across the 34 provinces is to transform the state into an instrument of the rule of law, transform the economy into a productive system and change the education system. President Karzai didn’t have these [demands]. Our current conditions leading up to these elections are parallel to the U.S. before the Lincoln election, Europe in the 1910s and ’20s, Spain after the death of Franco, Chile after the death of Pinochet. These were times when people took elections very seriously. This [interest in the election] gives me the grounds to be able to develop a system that would be responsive to the people, rather than carry out top-down reforms that would alienate constituents.

Q: Why did you choose Gen. Abdul Rashid Dostum, a notorious warlord, as your running mate?

A: This ticket is a way of reaching cultural acceptance. Peace cannot come without the engagement of those who have been before. Gen. Dostum will make peace possible. He was engaged in conflict of the past. Forgiveness is an extremely important part of our culture. But, like Rwanda and South Africa, we need to fashion our own solution.

Q: If you win, what are your priorities?

A: My immediate priorities are peace and stability. I want to differentiate between stability and security: Stability comes from the hearts of people and acceptance of the judicial system. Security comes from the barrel of a gun and the threat of the use of force. We’re seeing violence at an unprecedented level. We’ve become numb to bloodletting. Enduring peace cannot come unless we build a state that can guarantee our individual rights and obligations.

My second [priority] is inclusion and justice. We need a system of justice that is applied across the board. That is what this country is striving for. We’ve suffered from a variety of exclusions. In the past, I compared [our situation to] a person with scissors who first cut the sleeve, then the fingers, then our body politic to pieces. My job is to stitch the wounds together. We need an agenda of inclusion: the youth, the women, the poor feel an enormous sense of exclusion.

Q: What about the economy?

A: In 2012, [economic growth] was 12 per cent. In 2013, it declined by four per cent. The economy is the silent elephant in the room. We need to create jobs for 300,000 youth graduating from high school in the next three years. We need to produce growth so we can have an economic system that can turn our natural wealth into a productive system. We need services, because poverty reduction cannot take place without effective citizenship.

Q: Why has creating a system of good governance been such a challenge?

A: Our current administration is a patchwork—some from the French, some from the Swiss, the Turks, the Ottomans; then the Russians came; now we have a global presence. We need to create a system that is organic and can function for the whole state. Currently, foreign policy here is domestic policy.

We need to manage several circles simultaneously: Islamic circles, a circle of [near] neighbours, another circle that includes North America, Europe, Japan and the circle that is international development institutions [such as the World Bank and the International Monetary Fund]. Balancing all this is part of our complexity, our challenge. We are at an intersection of the 21st century.

Q: The last of the Canadian soldiers will leave March 15; the American exit plan is Dec. 31, 2014. Most other nations will leave between those dates. To what extent will the withdrawal of these troops affect your presidency?

A: I don’t approve of “option zero,” where all forces are withdrawn. The idea to do it in a sequence was designed by me: in five phases, and it has been very orderly. The basis of this idea was a strategic partnership with the U.S. and NATO and a commitment that was worked out at the Chicago NATO summit [on May 21, 2012] that Afghanistan will receive substantial support from 2014 to 2023 or ’24 for building and maintaining security institutions. The cost of our security section has been three times over our national revenue and, for post-2014, it would be two to 2½ times. This we cannot afford.

Q: The Bilateral Security Agreement would allow 10 permanent U.S. military bases in Afghanistan and deploy 10,000 U.S. soldiers, who would have immunity from prosecution and the right to unrestrained night raids and home searches in return for continued economic aid from the U.S. The other presidential candidates signed it but you didn’t. Why not?

A: I’m not the legal authority. I’m not president. If I were president, I would sign it.

A: Investing in a woman changes five generations. Investing in a man changes one. I consider women’s participation in all spheres of life absolutely essential. We must get enforcement of women’s rights. We must get birth records, marriage and divorce records recognized and enforced. We still have the highest rate of deaths of girls age one to five. For education, the balance between girls and boys is shifting favourably, but not at the university level. As to employment, Islam gave a woman the right to property and inheritance 1,400 years ago. The question is not legal rights; the question is the culture. A woman’s perspective on peace is crucial. We need women to continue to actively participate in the economy and the politics of the country, and we need to arrive at an enduring peace together.

Q: How can you make sure the warlords support your government?

A: We don’t have warlords. We have strongmen. They control provinces with military forces. These men at one time controlled territory; they have now been transformed into businessmen and politicians. Today our national security forces are built to control [the provinces].

There are a series of domestic and regional challenges. Either we all commit suicide together or guarantee institutions that provide stability for all. We need reforms that are enduring, so people aren’t frightened. Our first year is going to be very interesting.

Q: What’s your message to the Taliban?

A: I’d invite the Taliban to sit down with me. If they are Afghans, if they have grievances— and who doesn’t—we need to search for solutions, not killing.

Q: Pakistan has long been accused of harbouring the Taliban, provoking attacks on Afghanistan and sabotaging development plans. What’s your message to your neighbour?

A: Very simple: Don’t gamble on our destruction. Accept our hand of friendship. Reject it and you’ll be losers.

Q: How can you bring the tribes together to support your government?

Q: Why should the Afghan people support you?

A: Because I don’t want anything for myself. I want everything for them. I worked pro bono for 13 years. I didn’t hesitate for one moment after 9/11 to resign from my position of comfort [at the World Bank in New York] and to come and serve.

Q: Would you include women in the peace talks with the Taliban?

A: Women are part of the constitution, so, yes.

Q: Canada has given a lot to Afghanistan. What do you have to say to Canadians?

A: Thank you for the generosity, the commitment, the integrity. You’ve given us some of your best. Canada is the best model of public stewardship.