U.S. ambassador Bruce Heyman on pipeline politics, Obama’s relationship with Harper and why we’re still delayed at the border

U.S. President Barack Obama’s second ambassador to Canada, Bruce Heyman, arrived in Canada in March and, almost immediately, began organizing a coast-to-coast tour. The Ottawa posting is the first diplomatic job for Heyman, formerly a Chicago investment banker. It’s been a bit of a trial by fire. He spoke to Maclean’s about pipelines, the Obama-Harper relationship, and poutine.

Q: You’ve just finished three weeks on the road. What was the significance of this long trip across Canada to your work?

A: The U.S. government under my authority has over 1,200 employees, so the importance was to first go to our consulates. I really wanted to meet the people who work under my authority to get an assessment of how operations were taking place. In addition, I wanted to get to some border posts and airport clearance areas and find out first-hand how those operations are taking place. But also, when I sat down with each of the consul generals beforehand, over the phone, I said not only would I like to meet the employees, but I’d like to meet the political leaders, business leaders, and meet people who were just part of the community, to get a flavour of the place. So we got all of that: First Nations leaders, students, business leaders, civic leaders, et cetera. A real taste.

Q: You gave this big speech the other day in Ottawa on Canada-U.S. relations, encouraging everyone to look at the trend lines, not the headlines. You kind of have to do that—because the headlines are discouraging.

A: Which is why I said it. Sometimes—and I realized this when I did my first round of interviews—the headlines didn’t look like the interview I gave. And I joked with my team, “Maybe I should just do my interviews with the headline writers and not those that do the actual story; maybe that will have a better impact.” But, clearly, I understand the difference. The content of the story between our two countries is really strong and good, but sometimes, the headlines are focused on the challenges we face, and we’ll always have challenges. It’s a complex and wonderful relationship we have: personal, professional, corporate, and there will be times when we’ll have things we’ll need to work through. So I just say, “Don’t lose perspective by focusing only on the things you have to work through; look at the whole.” And I’m not saying, “Don’t look at the headlines,” only to take other things into account. This is about balance.

Q: Have you watched the President and Prime Minister Stephen Harper work in a room together yet?

Q: How would you characterize their relationship?

A: Professional. These are two very smart men, they’re serious, they’re roll-up-your-sleeves, work-hard folks, and I think they work and talk about serious things that are important to both of them. I characterize their relationship as something you’d expect of two G7 leaders running very large economies that are neighbours that have relationships with each other and the world.

Q: Allan Gotlieb, a former Canadian ambassador to Washington under three prime ministers, said you don’t get a lot of progress on the big, complex files if there isn’t a relationship of trust and confidence between the two heads of government. How are they doing?

A: Well, I wouldn’t characterize it as them having a lack of trust and confidence; I just don’t think these two gentlemen are the guys people sometimes want to see: an affable, embracing, hugging kind of relationship. That’s not in their DNA. I think the way they act and react to each other is totally aligned with their personality. I think that if they acted significantly differently with a multitude of leaders around the world, people would say, “The Prime Minister seems so much closer with other leaders,” or, “The President does.” Then it’s my job to focus on why that might be, to talk through that, but I think they’re behaving appropriately and I do think they trust each other. There’s a strong degree of trust in their relationship, because they’re working on very difficult issues, both globally and bilaterally.

Q: Border delays are still a problem. You cited in your speech the substantial progress in Vancouver, where it’s something like 50 per cent faster across the border. But I come from southern Ontario, and it’s still pretty rough.

A: It’s 50 per cent faster from 2½ years ago, so you have to go back. Number 1, Nexus [identity] cards are really important, and so is implementing the technology for that. We’ve just passed the millionth Nexus holder. We monitor times it takes for people to get through the border, across the 121 border crossings. What people don’t realize is that there are between 300,000 and 400,000 people who go through the border every single day, along with 1,200 flights. There are times when the system’s backed up: certain holidays, certain events. But, for the most part, it’s moving pretty well, especially if you have that Nexus card. I’d really like to see an acceleration of Nexus holders. In some locations, it’s hard to get, because the wait time is there. I say, get in line, fill out your application and do it. I met with the Toronto airport authority, where the wait time is one of the longest—six months to get an appointment. We talked about how we can expand the facility to do more. In Vancouver, they had such a backlog; they went over to the cruise terminal when the cruise ships weren’t coming in for a few months during the winter. They took it over and processed some 14,000 Nexus holders through that terminal and cleaned up a backlog of people. We called it a surge. That demonstrates how well this program is working and how much people want to be a part of it.

Q: I’m reading about missile defence again. For more than a decade, Canada has not participated in the U.S homeland missile defence. Now that’s being reconsidered. Is that an active homeland defence program? Is there a desire to see Canadian participation? Would there be an on-ramp if Canada wanted to participate?

A: I think it’s an internal Canadian discussion. These are the kinds of things we’ll leave to Canadians to decide if they’d like to participate or not. As of right now, they don’t participate and I’ll just leave it to the Canadian people to make a decision. We’re good partners around the world, we work together in so many ways militarily, but in almost all of those instances when we do that, it’s Canadians who decide when and how to do it. I just think it would be inappropriate for me to dive into that debate.

A: First of all, we appreciate the challenge of this decision process and how seriously Canadians take it, as we also take it seriously. There are citizens on both sides of the 49th parallel who have very strong opinions on the outcome of this. What’s happened as a result is the amount of commentary we received after we came out with the environmental impact study. We had 1.5 million comments that we worked through and, even after the public comment period on the [second] phase [which was designed to determine whether Keystone is in the U.S. national interest], we got over three million comments. Some are form letters, but there are still hundreds and hundreds of thousands of unique items. One of the things we said is, this is going to take us a bit to process. We asked, by law, for comments from folks, and we owe them the legal responsibility to review those comments. So, on Good Friday when we announced this, it was one of two important points that we raised.

The second is the uncertainty that has been created as a result of the Nebraska court system. One agency was set to receive comments from the public, including Canadians. We then went to the other agencies of the U.S. government for comment and, as a result of the uncertainty of Nebraska, we told them they had extended time. We’ve not put a final timeline on it at this point. Were working through it; it’s a process.

Q: Some commentators in Canada say that if we had any skill at reading between the lines, we’d understand that this much delay is our answer. The answer is “no.”

A: We have commentators that say it’s absolutely going to “yes,” others say “no,” others say it’s going to be something in between. It’s just speculation.

Q: On your recent tour across Canada, did you try poutine?

A: I did. I loved it. Problem is, I’m trying to have a reduced-carb diet and that just doesn’t fall in that category. 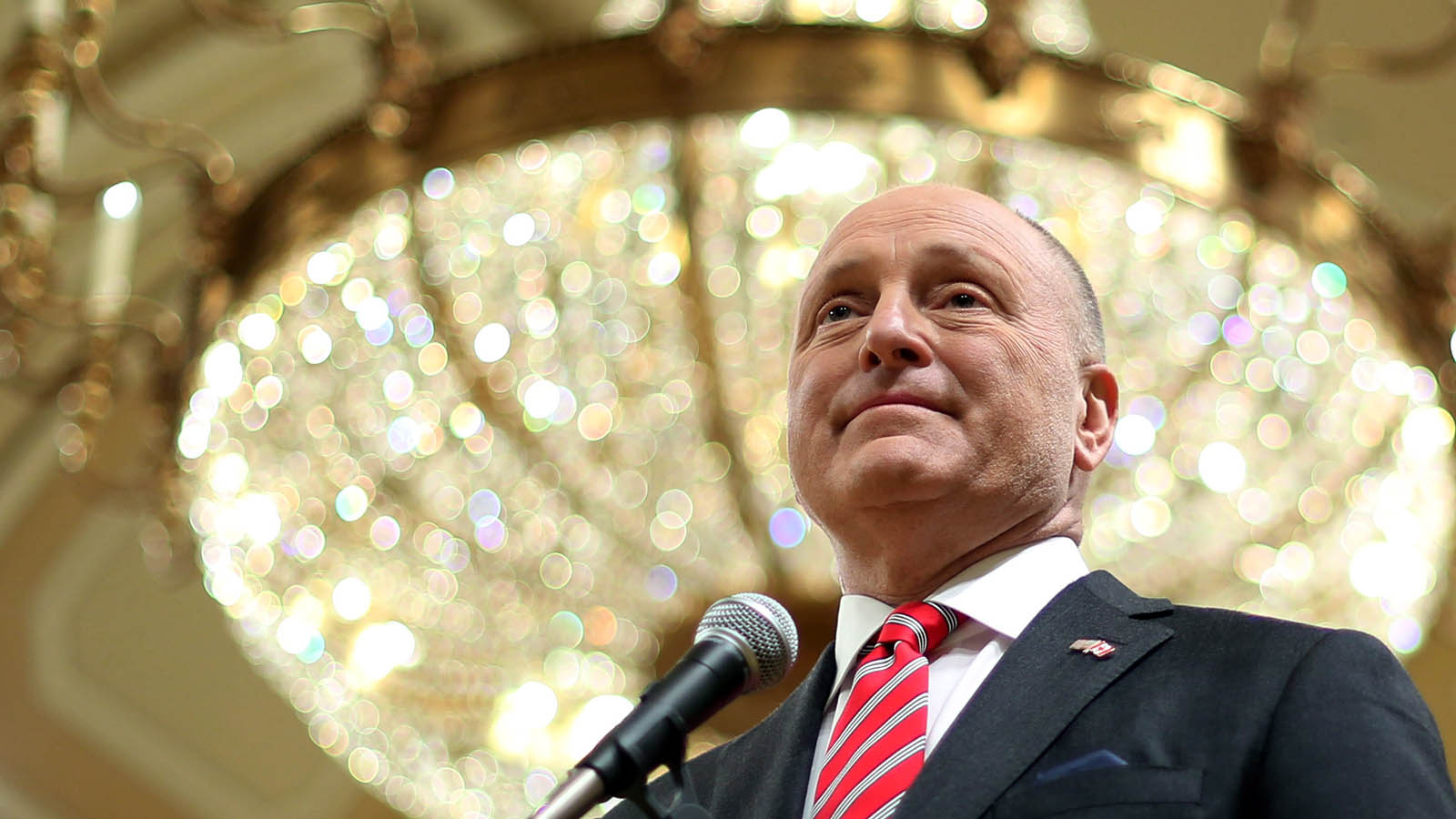 FILED UNDER: Bruce Heyman Paul Wells in Conversation The Interview