The lies and insults that China has pointed at Canada

The fight over the arrest of a Huawei executive is getting ugly. So far, China has accused Canada of everything from 'white supremacy' to having few friends. 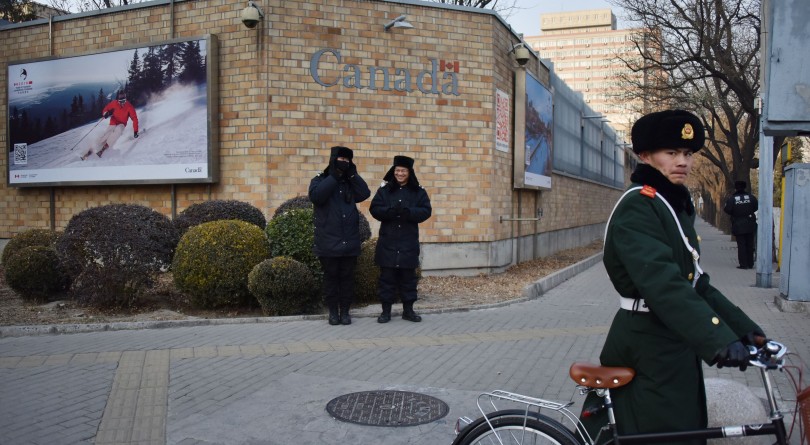 Since Dec. 1, when Canada arrested Chinese executive Meng Wanzhou as she passed through Vancouver International Airport on her way to Argentina, China’s communist government has been very, very unhappy with Canada.

In op-eds and statements from Beijing, China has accused Canada of being part of a U.S. “witch-hunt”, perpetuating white supremacy and of “illegally” detaining Meng.

Meng, a prominent Chinese citizen and CFO of Huawei Technologies, was arrested on a U.S. warrant alleging she committed bank fraud by hiding from various international banks that Huawei was clandestinely doing business with Iran, in violation of U.S. sanctions.

She was released on $10-million bail and is now living at her home in Vancouver. This week Canada’s ambassador to the U.S., David MacNaughton, told the Globe and Mail that the U.S. is planning to go ahead with its formal request to extradite Meng.

Yves Tiberghien, a political science professor at the University of British Columbia and Director Emeritus at the Institute of Asian Research, has been watching the geopolitical fracas closely. When Canada arrested Meng, he says, we “essentially punched a dragon in the face.”

In Tiberghien’s assessment China’s bombastic response to Meng’s arrest has been both inappropriate and ineffective. Nevertheless, he contends, if one parses China’s flamboyant language and its fictions to examine what underlies them, it may have some valid beefs.

Here are China’s biggest insults so far and the deeper meaning behind them.

1. This is a political ‘witch hunt’

In a Dec. 13 op-ed penned for the Globe and Mail, Lu Shaye, China’s ambassador to Canada, wrote that the United States bullied Canada into arresting Meng.

The arrest, he said, was “a premeditated political action in which the United States wields its regime power to witch-hunt a Chinese high-tech company out of political consideration.”

The Canadian government has repeatedly said that Meng’s arrest was a straightforward judicial case where Canada was bound by a long-standing extradition treaty with the U.S. It therefore had to detain Meng at the U.S.’s request when she set foot on Canadian soil.

READ MORE: Who lost China? And how was Canada supposed to win it?

Tiberghien notes that China didn’t see any of this coming. “The arrest of Ms Meng was a huge shock to China in many ways and clearly a huge loss of face for [President] Xi Jinping personally. Hence the massive reaction. Huawei is a huge fish, the company is seen as a model by many young Chinese entrepreneurs trying to be successful. A bit like Facebook or Microsoft.”

As for the “witch hunt” remarks, that’s undue, says Tiberghien. But it is hard to ignore that Meng’s arrest has taken on a political tone. In a December interview with Reuters about Meng’s case, U.S. President Donald Trump said, “If I think it’s good for the country, if I think it’s good for what will be certainly the largest trade deal ever made—which is a very important thing—what’s good for national security—I would certainly intervene if I thought it was necessary.”

2. Canada ‘illegally’ arrested Meng ‘in a miscarriage of justice’

That’s what Lu says. But legal experts who have weighed in on the case say this is clear: if the U.S. provided proper grounds to arrest Meng, Canada was legally bound to do so under the extradition treaty. It would have been highly inappropriate and contrary to the rule of law for Canada to ignore such a request from the U.S. Department of Justice.

Before Meng can be extradited to stand trial in the U.S. she will get a fair hearing that will examine the evidence and determine whether she committed a crime under Canadian law as well. That could take months.

Still, notes Tiberghein, the U.S. goes further than any other country in the extraterritorial pursuit of foreign companies that break its sanctions laws, something that deeply irritates many countries. But normally the Americans confine themselves to levying large fines against American and foreign companies that break sanctions. Canada’s arrest of a high-level foreign executive on behalf of another country for an alleged violation is rare.

In another blistering op-ed, this one in the Hill Times, Lu Shaye wrote, “It seems that, to some people, only Canadian citizens should be treated in a humanitarian manner and their freedom deemed valuable, while Chinese people do not deserve that. The reason why some people are used to arrogantly adopting double standards is due to Western egotism and white supremacy.”

Even for a country whose leaders often deploy harsh, flamboyant language against foes, this remark took Tiberghien aback. “The white supremacy comment was a mistake…. It’s a bit more like a school yard than professional diplomacy on both sides.”

4. Travelling to Canada is dangerous for Chinese nationals

On Jan. 15, Canada issued a travel advisory against China. This came after what Canada termed the “arbitrary” arrests of Kovrig and Spavor and when Canadian Robert Lloyd Schellenberg appealed his 15-year sentence for trying to smuggle drugs out of the country and a Chinese court  increased his sentence to the death penalty.

Trudeau accused China of arbitrarily applying the death penalty to Schellenberg as payback for Meng’s arrest. Hours after Canada issued its travel advisory, China, citing Meng’s detention at the request of a third-party country, countered with its own advisory. It warned its citizens to “fully evaluate risks” of traveling to Canada.

Both sides, argues Tiberghien, issued the advisories, “not because they really believe” there are valid fears, but because they’re engaging in hyperbolic rhetoric out of anger.

China’s citizens, he says, especially its more informed middle-class, know Canada is safe to travel to. But any official package group tours or official Chinese delegations must take their cues and guidelines from their authoritarian government. “So it’s not what they think about Canada.  It’s what they are told.”

Meanwhile, Tiberghien believes Canadians have little to fear when traveling to China. “I have no problem going. UBC in general has assessed the current risk of going to China. We have people going all the time….So far we have seen nothing on our radar to make us nervous.”

Though others wonder if some Canadians are being naïve. “I wouldn’t go to China unless I had a really, really good reason to go,” said David Mulroney, Canada’s former ambassador to China.

5. Canada has no friends

“Actually, you can count by the fingers of your hand the few allies of Canada that chose to side with it on this issue,” a Chinese foreign ministry spokeswoman told the media.

That one is just plain wrong. As Chrystia Freeland, Canada’s foreign minister, said, “I would just point to the fact that the EU alone, which has issued a statement, is a union of 28 countries.” Also on Canada’s side: the U.S., Britain and Australia.