The next, best hope for Afghanistan

Until his assassination, Ahmad Shah Massoud fought the Taliban in the name of a tolerant, united Afghanistan. Now his son is taking up the struggle. 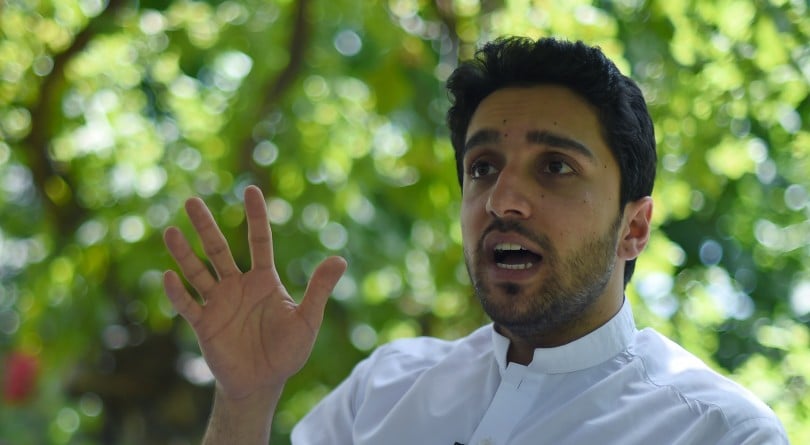 Ahmad Massoud, the son of Ahmad Shah Massoud, at the Jangalak village of Bazarak District in Panjshir Province on July 19, 2016 (WAKIL KOHSAR/AFP/Getty Images)

On Sept. 9, 2001, two days before commercial airliners smashed into the World Trade Centre in New York and the Pentagon in Arlington, Virginia, a pair of suicide attackers posing as journalists killed the legendary Afghan leader, Ahmad Shah Massoud.

The assassination was significant for a host of reasons. There was, of course Massoud’s military prowess, proven repeatedly during the resistance to Soviet occupation and later against the Taliban. More importantly, perhaps, was his vocal support for a moderate and democratic Afghanistan where power was shared between all of its ethnic groups.

As the anti-Soviet jihad had shown, a united Afghanistan was a powerful force against foreign occupation. For groups like the Taliban and al Qaeda, not to mention foreign actors like Pakistan, keeping Afghans divided was the only way to keep it under their influence, and Massoud was the one mujahidin leader who had any credibility with a wide swath of Afghanistan ethnic groups.

His death was not the beginning of Afghanistan’s ethnic disintegration but it was the opening of the floodgates. Since then, Afghanistan has spiraled deeper into conflict. The Taliban have steadily gained ground and now control or contest more than 60 per cent of the country. Ethnic militias have congealed into political factions, each with their own foreign backers and agendas.

In the absence of a unifying leader like Massoud, ethno-nationalists now dominate Afghanistan’s political scene.

It’s into this poisoned environment that Massoud’s son, also named Ahmad Massoud, has entered, thrust into the role of carrying on his father’s legacy after years in self-imposed exile. With an undergraduate degree in War Studies from King’s College London, the 29-year old has faced calls to resume the role his father once played, leading Afghanistan in the fight against the Taliban. He has resisted.

For the younger Massoud, the greater jihad is not the military campaign his father once led but the struggle to unite his fractured nation. He faces a difficult road ahead. With parliamentary elections scheduled for October and the presidential vote set for April next year, Afghanistan’s powerbrokers are doing what they do best: jockeying for position in what is shaping up to be a highly contested process. And at the heart of their tactics is ethnicity.

Massoud, who was recently named CEO of the foundation named after his father, spoke to Maclean’s last month about the challenges Afghanistan faces and the burden of donning his father’s mantle.

Q: How do you view the legacy of your father?

A: When I was young, I could see clearly the decisions he was making and his thinking. We used to talk a lot and now that I’ve read his diaries, I understand even better what his ambitions were.

One thing is that many people consider my father a military genius, which he was. But they don’t see the other sides of him. He really was a visionary figure. The grand strategy that he had —war fighting, defending Afghanistan, fighting against two totalitarian regimes, the communists and the Taliban—was just a part of it. I’ll quote him because no one can define better the strategy than he could himself: ‘We should be able to build an Afghanistan where we live peacefully with each other and the world.’

READ MORE: Massoud Khalili was with Ahmad Shah Massoud when his friend was killed. This is his story.

He defined living together peacefully as social justice within Afghanistan and relationships with foreign countries based on respect first, on human values, but also on Afghanistan’s national interests.

Unfortunately, that’s a problem now. In 2002, there was some hope for building in that direction. We were hoping for a new constitution, a new government, new elections to build Afghanistan. But unfortunately after two decades, we see that we are slowly losing that grip on the most important thing that we sacrificed many lives for: democracy.

Q: There are those who would rather see you lead militarily, for instance during the Taliban assault on Kunduz in 2015. (At the time you were in school in London.) How do you respond to them?

A: There has been pressure put on me by the people, especially during the Kunduz fighting, to come here and to help them. I would’ve gone if I didn’t have an immigration problem in the U.K. and my passport wasn’t gone, because these are people I love and respect and I want to do whatever I can for them.

Q: Do you support the ceasefires President Ashraf Ghani has announced and the peace process led by the Americans?

A: No. The ceasefire offers were a mistake. The Taliban have not stepped down from their demands. If they agree to the basic demands of the Afghan people—that my daughter can vote, my mother can vote, that they have rights, that every religion is allowed to be practiced, if they recognize the importance of the parliament and political parties—then why not, come.

If a Taliban leader comes and says, ‘okay, I’m going to run for president’ and he receives the votes, then I’m going to respect him. He can be president. But he must respect this system. We fought and we sacrificed thousands of lives for this.

As for the Americans, they have already lost the trust of the Afghan people because they have turned a blind eye to fraudulent elections and corruption. This [peace process] will also do the same thing.

My father had a very proper doctrine and strategy for them. With empty hands, with literally nothing, he fought against a force that was backed very clearly and visibly by many countries. He was able to cut their support and gather all the people and unite them. And he knew the Taliban would submit if they stopped receiving support from Pakistan. They knew that he could not be defeated, which is why they assassinated him.

If I sit down to negotiate with them, that will be on the table. But they need to sit down with proper intention and decency. If they put their guns down, just this simple thing, I will forget that they killed my father and I will accept them as brothers. They can have their own MPs, their own ministers, their own president, if the people vote for them. But if they don’t accept the basic demands of every person around the world—democracy and human rights—then they must know it can’t be done.

Q: Unity was a key theme in your father’s vision for Afghanistan. Why is Afghanistan so divided today?

A: There are many elements and factors pulling it apart. Unfortunately for figures like myself, who are moderate, not radical at all, not in a religious sense or an ethnic sense, the path is becoming very hard because the activities of such radical figures is pushing the people.

People are afraid. ‘What is going to happen to me?’ they think. ‘Where is my right?’ The radicals play on these fears and the moderates, who were the popular ones at one time, are starting to lose their positions.

There is an uprising within the Tajik community and they are gathering around any figure that says, ‘I hate this government. I hate Ghani because he’s fascist.’ You see this: Pashtun, Tajik, Hazara, Uzbek—we have never witnessed such a thing. Not Taliban, not ISIS, nothing can break the spirit of Afghanistan except this division. 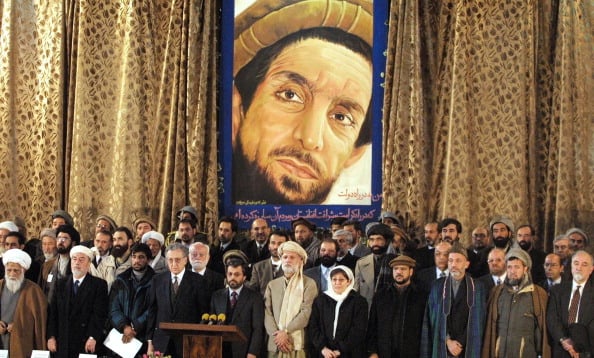 Members of the Afghan interim government and other tribal elders stand as Afghanistan’s national anthem is played, with a portrait of assassinated Northern Alliance commander Ahmad Shah Masood in the background, in Kabul on Dec. 22, 2001. (JIMIN LAI/AFP/Getty Images)

Q: How do you fight this kind of division?

Q: But how do you make space for a new generation of leadership?

One problem is the Americans. For example, the Ambassadors here, they never visit [these new faces]. They just visit the old figures. They never give new leaders the spotlight they need.

Q: Ironically, many of these young people are graduating from American institutions, through Fulbright scholarships or the American University in Kabul. So in a way, the Americans are grooming them but then not paying attention to them.

A: That’s the funny thing. Maybe they’re just waiting for them to create a place for themselves. But in this situation, with the old leaders grabbing more and more power for themselves, these people need more active support. It’s not about any specific position in government. It’s not like, I’m going to put this young man in this position. The system is so unfortunately corrupt that that position will corrupt that young person too. Having young people in a few positions here and there is not going to change anything. We need leaders on the opposition side, we need leaders on the government side, not just young people but leaders with new ideas in government, in NGOs, in civil society.

I’m really hopeful for the people. Our people are amazing. We see this in elections. They’re really smart; they know what they want. They always want to vote for the best, for the right people. They oppose fraud. But unfortunately, their voices have not been heard. They have lost trust in the whole democratic system.